Russians reportedly kidnapped a third Ukrainian mayor, but he said on Facebook Live he has been released. 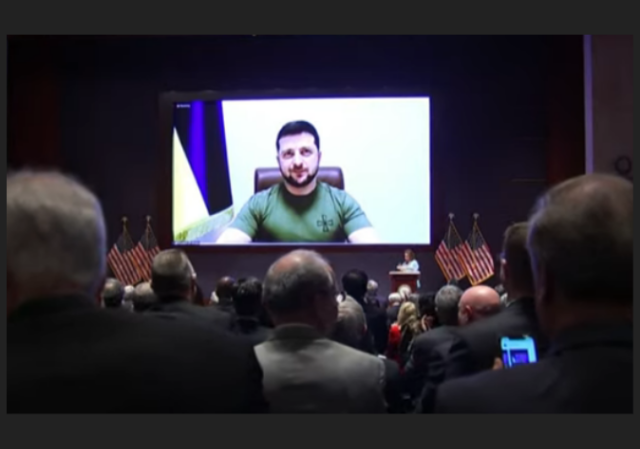 Russia is tearing apart Ukraine. People are dying in Ukraine, including journalists.

New Yorker journalist and CNN global affairs analyst Susan Glasser, from the safety of her home, used the death of Fox News cameraman Pierre Zakrzewski to slam the network.

A WaPo journalist agreed with Glasser

Ukrainian President Volodymyr Zelenskyy will address Congress on Wednesday at 9 AM ET. I have the live stream below.

An hour later, Yakolev said on a Facebook live stream that the Russians released him.

According to his Facebook livestream, Skadovsk Mayor Oleksandr Yakovlev said he has been released. https://t.co/vFiyo4yjG2 pic.twitter.com/GjNHXd05Wt

Zelenskyy: “I Call on You to Do More

Zelenskyy told Congress he needs the West to do more as Russia continues to tear apart Ukraine every day. It’s a shame we have a man who is not all there in the White House:

“I’m addressing the President Biden,” Zelenskyy said. “You, the leader of your nation, I wish you to be the leader of the world.”

Zelenskyy also invoked 9/11 and Pearl Harbor, reminding Congress of what it’s like to face an attack. Except Russia is attacking Ukraine like that 24/7:

“Ladies and gentlemen, friends, Americans, in your great history, you have pages that would allow you to understand Ukrainians understand us right now, when we need you right now,” he said. “Remember Pearl Harbor, terrible morning of December 7, 1941, when your sky was black from the plains attacking you. Just remember it.”

Zelenskyy went on to invoke Sept. 11, 2001, calling it a “terrible day” when “independent territories” were turned into “battlefields,” and “when innocent people were attacked—attacked from the air.”

“Yes, just like no one else expected. You could not stop it. Our country experienced the same every day,” Zelenskyy said. “Right now at this moment, every night for three weeks now, various Ukrainian cities, Odesa and Kakutani, have been so many predominantly of Mariupol.”

Zelenskyy said Russia has “turned the Ukrainian sky into a source of death for thousands of people,” saying there are missiles and “countless bombs.”

Zelenskyy has made the rounds to Western governments. First Britain, then Canada, then the EU, and tomorrow it’s our Congress.

More than likely Zelenskyy will ask for more help and ask again for a no-fly zone. Biden has been adamant about not putting in a no-fly zone. The appearance also comes after we learned the WH didn’t want to help Ukraine in December because it would tick off Putin. We also know that Biden pressured Poland to not give Ukraine new planes.

Ghouls at CNN and WaPo

These people are disgusting.

What a tragedy. A cameraman died covering the war for a TV network that airs a pro-Putin propagandist as its top-rated primetime host. https://t.co/zKHXRciMYu

So grateful for the heroic work that Pierre and all the journalists, Ukrainian and foreign, have been doing risking their lives to show us the horror of this war. Makes the years of lies and propaganda so much harder to take—there are truly deadly consequences.

The Ho Chi Biden Trail of weapon supplies will prolly be the flash point of WW3. These huffing and puffing idiots can’t wait for a mushroom cloud near you.

There are advocates and activists who fight to sustain the millions of precedents that are set annually, globally in a liberal, progressive, transhumane wicked solution… planned parent/hood to relieve “burdens” for social, redistributive, clinical, and fair weather (e.g. climate stasis) causes. Demos-cracy is aborted in darkness.

If you moved the Bay of Pigs on to land, you would have Ukraine.
The army the US has in the Europe right now is 1/8th the size of the Army of Ukraine.

Don’t watch watch tucker. Why at did he say that made him a target?

He tells the truth about the Biden Administration every night.
It drives the left crazy.

He has just been saying that a measured and prudent evaluation and plan of action is needed. He has also pointed out that what the Ukrainians are reaping was more than partly sowed by our political oligarchs. The full extent of U.S. Involvement in Ukrainian corruption would probably be shocking. Look at Libya and Afghanistan as examples….not even counting Iraq. Now the whole world will suffer. It’s hard to make Chicken Kiev when all of the chickens have come home to roost in the West.

I don’t want to agree with Biden, but I’d characterize our response as measured. My heart says Highway of Death, but my head says this is not yet our war.

Until Russia directly attacks the US it is not our war and that isn’t in the cards. The fact is Ukraine and it’s sovereignty is not of critical national security interest to the US. IMO, launching our Nation into a conflict thousands of miles away because of very effective propaganda on the part of Zelenskiy is foolish.

Zelenskiy has been extraordinarily effective at leveraging the images in Ukraine for additional Western support. To say it’s effective propaganda is intended as a compliment. He’s harnessed the power of social media and crafted a masterful message to the world, highlighted by the tenacity
displayed by the Ukrainian Army thus far. From an IO perspective it couldn’t be done better.

Biden has been adamant about not putting in a no-fly zone.
And, for probably the only time, I agree. It would be a direct confrontation with Russia, leading to a likely state of war between us. If you think that’s a good thing….

And not just Russia. If we go to war with Russia, China is inevitably going to get involved and will side with Russia.

They are trying to get Rucker off the air

People toss around the phrase “no fly zone” as if it merely list of those not allowed to fly, like the terrorist list. Such a zone in the current conflict would require the US/NATO shoot down all Russian aircraft in the zone. That would be a declaration of war on Russia.

For what? We have no strategic interest in Ukraine. We’d be going to war based on a certain group’s feelings.

Not to mention that it would require planes patrolling the sky to make sure people don’t fly through it. To keep those planes safe, we would need to take out, ie bomb, SAM sites inside of Russia.

But, but… we have all those children of democrats that launder money in the Ukraine; isn’t that a strategic interest…..

Yeah, but our Congress members know that and they gave Zalenksy a standing ovation anyway. He has already been told no and explained the reason why and yet he still keeps asking.

“We’d be going to war based on a certain group’s feelings.”

Kiev had 32 trimesters to end the Slavic Spring that disenfranchised and oversaw assaults (i.e. denial of services, military and paramilitary attacks) on the Ukrainian people.

Hate to even mention this, but we need to be prepared to immediately turn the spigot off lest Putin beat them into submission and the money/weapons go to a Putin stooge govt.

Or didn’t we leave enough US funded equipment on the ground in Afghanistan for our enemies?

Also, we have no business reconstructing the country if Putin wins. The Russians can pay for that.

I think that at the end of the day, Russia is going to take Ukraine. And sending high grade military weapons to that country will only serve to intensify the conflict and encourage Putin to use more desperate measures to win. In that case, encouaging and cheering Ukriane to keep on fighting will only serve to prolong the war, leading to more deaths and causing the conflict to spread. But what the heck to do I know?

Exactly. All these fools sending nonhumanitarian aid, financial and otherwise, to Ukraine are engaging in giving them false hope and encouraging them to commit suicide.

Zelensky probably would have capitulated until he got dollar signs in his eyes from the billions that the US is sending in to “help” them. It seems that he doesn’t care all that much that any male who can hold a rifle is being forcefully conscripted to go on these suicide missions, and the Western media are gobbling up the image of the Ukrainian equivalent of Custer’s Last Stand.

Lest we get too up ourselves, remember the US is not the only one sending aid, lethal or not, to Ukraine. This isn’t just a US vs. Russia peeing contest.

Some nations in fact are breaking long historical vows and traditions of neutrality to do so. Germany changed its constitution to be able to do so, Sweden is sending 5,000 anti-tank rockets. Etc.

Apologies nordic, that was supposed to be a seperate post, not directed at you. Not sure how that happened.

Zelensky is in the same position as Haile Selassie was in addressing the League of Nations over the invasion of Ethiopia by the Italians.

No. Custer didn’t win. Ukraine already have, unless Russia use WMD.

That is a very profound observation. Probably the most accurate single sentence analogy or explanation that’s been offered so far.

Ukraine has done about all they can in the face of a heavier force. Anyone who truly believes the Ukrainians are going to achieve a battlefield victory is ignoring reality.

Remember what happened to all the equipment we sent to Afghanistan to be used against the Taliban?

Tucker is the one FOX host who isn’t completely pro-war and anti-Russian, correct me if I’m wrong, and isn’t even pro-Putin, and the Left treats him both as too extreme even for other conservatives, and as even more representative of conservatism due to his extremism.

Clearly the Left can’t fathom not enforcing lockstep uniformity, and considers opinions either mandatory or forbidden, to be handed down from on high.

Petrushka: Don’t watch watch tucker. Why at did he say that made him a target?

“Why do I care what is going on in the conflict between Ukraine and Russia?!” Carlson said. “And I’m serious. Why do I care? Why shouldn’t I root for Russia? Which I am.”

It was a great speech and the video was moving. Putin is a KGB thug who sees his job as restoring Stalin’s reign over Eastern Europe. What we need is a Kiev Airlift enforced by the USAF

Zelenskyy also invoked 9/11 and Pearl Harbor, reminding Congress of what it’s like to face an attack.

So he basically told Congress it’s just like the Jan 6 ‘Insurrection’. A day they all feared for their lives at the hands of unarmed Trump supporting grandmas and grandpas.

Apparently he thinks if that doesn’t get a No-Fly zone nothing will.

And for good measure, he invoked MLK, “I have a dream, these words are known to each of you – today I can say I have a need. I need to protect the sky,”

I half expected him to unzip his pants and play the piano for an encore.

(No sarc tag necessary. He has actually done that on tv)

This is Washington’s war, and they seem to want it so they’ve got the media working up all the wine-moms on facebook and their male counterparts into full-shriek hysterical virtue signaling.

What are the other European countries doing? Still buying Putin’s oil? Poland threw the MIGs back in Biden’s face and said “you first”.