The peace talks are the first in two weeks. At the last one, a Russian oligarch and two Ukrainian delegates had symptoms of a possible poisoning. 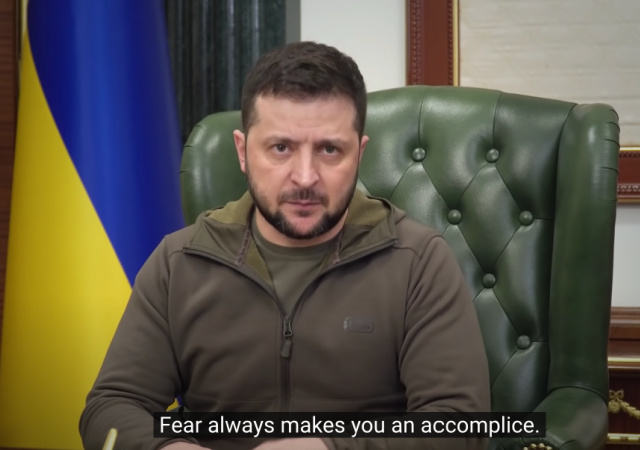 Reports came out that Russian oligarch Roman Abramovich and two Ukrainian peacekeepers have symptoms of poisoning after a meeting earlier this month.

On the bright side, Ukrainian forces took back a few towns from Russia.

Anyone shocked? Anyone? Yeah, I’m not either:

A U.S. official tells Fox News’ Mark Meredith Tuesday that “any movement of Russian forces from around Kyiv is a redeployment, not a withdrawal, and the world should be prepared for a major offensive against other areas of Ukraine.”

Russia announced earlier today that it was withdrawing forces from the Kyiv and Chernihiv regions in hopes of laying the groundwork for a peace deal with Ukraine.

This is crap. Russia said it would “reduce” military activity in Kyiv and Chernihiv.

Only two cities. Reducing means they’ll still be in Ukraine:

The decision was taken as “negotiations over the preparation of an agreement on Ukraine’s neutrality and non-nuclear status, as well as on the provision of security guarantees for Ukraine, are entering a practical stage”, deputy defence minister Alexander Fomin said in a video shared by Russian state media.

In order to “increase mutual trust, and to create the necessary conditions for future negotiations”, Russia’s defence ministry “has decided to dramatically reduce military activities in the directions of Kyiv and Chernihiv, several times over”, Fomin said.

The announcement follows statements made last week by the leadership of the Russian armed forces that announced Moscow was entering a “new phase” in the war in Ukraine.

Fomin said more details will be made available by the general staff after the Russian delegation returns to Moscow from Turkey. He also called on Ukraine to follow Geneva Conventions on the humane treatment of prisoners of war.

G7 Says No to Roubles, Russia Says It Won’t Take Other Payment

Have fun with no energy, G7:

“No one will supply gas for free. It’s simply not possible. And payments will be accepted in roubles only,” said Kremlin spokesperson Dmitry Peskov on Tuesday, according to Russian news agency Interfax.

“This is not an appeal to companies. This is not a declaration. Yet companies need to understand the changed market situation, the absolutely new reality that has emerged amid the economic war waged on Russia,” he added.

Earlier Putin asked the country’s gas giant Gazprom, the central bank and the government to come up with a clear mechanism for gas payments in roubles by March 31.

Several European buyers of Russian gas, such as OMV and Eni, have said they do not have a way to pay for Russian gas in roubles as that would be in breach of contracts, while France’s president Emmanuel Macron said payments must continue in euros.

“Russia was, is, and intends to be a reliable energy supplier, and Russia is interested in selling its gas,” Peskov said. “We are certain that we offer the best gas in the market in terms of the supply rhythm, and in terms of reliability. All the other options are worse.”

The delegation is led by Ukraine’s defence minister, Oleksii Reznikov, as well as Mikhail Podolyak, the head of the president’s office.

The group says their top priority is to secure a ceasefire, although there is scepticism about whether this is likely.

The face-to-face talks, the first in more than two weeks,will be hosted by Turkish President Recep Tayyip Erdogan.

Among other things, Russia is demanding that Ukraine abandon any intention of joining Nato – an issue Ukrainian President Volodymyr Zelensky has said he is willing to compromise on.

Other thorny issues expected to be discussed include the fate of separatist-held regions in Ukraine’s east, as well as the status of Crimea, which was formally annexed by Russia in 2014.

Seriously. If the West has no intention of doing anything they need to shut up. Zelenskyy is sick of empty promises:

In his nightly video address, he harshly criticised the “passive” nature of some sanctions, saying the world cannot wait for Russian actions to respond.

Zelensky lamented that “strong preventive sanctions”, if they had been adopted by world powers earlier, might have prevented the invasion.

He slapped his hand on the table at times to press his point during the seven-minute address:

“A full-scale war has begun,” Zelensky said. “Now there are many hints and warnings that supposedly tougher sanctions, such as an embargo on Russian oil supplies to Europe, will be put in place if Russia uses chemical weapons.

“There are simply no words. We, people who are alive, have to wait. Doesn’t everything the Russia military has done to date warrant an oil embargo? Don’t phosphorous bombs warrant it? A shelled chemical production facility or a shelled nuclear power plant doesn’t warrant it?”

Zelensky said he plans to address the parliaments of several countries this week to urge them to provide more weapons.

“Ukrainians should not die just because someone cannot find enough courage to hand over the necessary weapons,” he said.

“Fear always makes you an accomplice.”

Ukrainian forces have fully retaken the town of Irpin, according to Mayor Alexander Markushin

They also retook Trostyanets in eastern Ukraine and Kherson in the south.

Mr. Abramovich, Ukrainian lawmaker Rustem Umerov and another negotiator developed symptoms following the March 3 meeting in Kyiv that included red eyes, constant and painful tearing, and peeling skin on their faces and hands, the people said. Mr. Abramovich has shuttled between Moscow, Belarus and other negotiating venues since Russia invaded Ukraine.

Mr. Abramovich was blinded for a few hours and later had trouble eating, according to a person familiar with the matter.

Some of the people familiar with the matter blamed the suspected attack on hard-liners in Moscow who they said wanted to sabotage talks to end the war. A person close to Mr. Abramovich said it wasn’t clear who had targeted the group.

Mr. Abramovich and others involved in the incident since have improved, and their lives aren’t in danger, the people said. Ukraine’s president, Volodymyr Zelensky, who has met with Mr. Abramovich, wasn’t affected, they said. Mr. Zelensky’s spokesman said he had no information about any suspected poisoning. “I’m fine,” Mr. Umerov tweeted on Monday.

Russia has a history of poisoning people. It wouldn’t shock me if the Kremlin had something to do with this.

Do not worry. Biden will come out in a few minutes and read something off a scripted cue card and tell us everything is good.

‘Sell out Joe’ will probably regale everybody about how he drove a tank across Poland during the Crimean War.

Okay, this made me giggle. Too funny.

What I don’t want to do is make this too serious. It is funny. Come on. Still too many lives lost. Fuzzy, if I took things too serious do your think I could have served 20 years in the U.S. Armed Forces?

My own death is a funny thing.

You’re funny, Fuzzy. What if I happen to love you?

He doesn’t need que cards for his stories. Ideas and pictures flit in and out of his brain from he knows not where.

He can no longer tell the difference between fantasy and reality.

I am waiting for the reports of how Biden is buying surplus weapons off the Taliban to send to Ukraine. BTW, the Taliban have started the largest Military Surplus Store in the World. They call it: Traitor Joe’s.

Take a lesson from Afghanistan. If Ukraine loses, guess who is going to have all that military equipment Biden sent over there?

I listened to thee German representative to the G&. He did not say that they will not pay rubles.

They said that they will “urge companies to not pay in rubles”.

These are politicians. You have to listen to the weasel words.

Exactly. This notion of a contract breach is foolish posturing, the sanctions levied were effectively a breach. Payment in Euros or USD which can’t be spent in the West due to sanctions makes them effectively worthless. I suspect that payments in either rubles or gold is coming, one way or another. End of March is supposed to be the implementation date, could get interesting.

These are politicians. It’s easy to tell when they’re using weasel words.

Russia has a pipeline to Germany and a pipeline to Turkey. They will likely try and use their energy control over those two countries to try to split up NATO.

Negotiators poisoned because they went blind.

Nah. They just drank the Ukrainian vodka. Stick to Polish or Russian.

Maybe it wasn’t vodka, maybe it was slivyanka. The equivalent serbian slivovitz tastes like it would be good for degreasing engines.

Ukraine-1 month so far significant Russian progress but it is obvious they are just repeating the Chechnya campaign with less use of their air force because this time the media is watching and they don’t want to level cities if they could avoid it and are fighting in urban terrain.

Unless Vladimir Putin has a much more modest set of demands than I think he does this will be a very long war so whatever shortages may result from our sanctions (if they aren’t revoked) expect it and expect it to last for a long time.

A probable step toward reconciliation and remediation between Kiev and Ukrainians affected by the Slavic Spring, to be organized and moderated by Turkish officials. Eight years later, two years with Zelensky, but better late than never.

Looks like Zelensky is finding out it’s fairly easy to pretend to be a president on TV, but the reality is quite a different story.

Biden’s learning the same thing – it’s easy to play pretend president, especially when your staff is working overtime to clean up your crap, figuratively and literally.

Sleight of hand? Look here to west while we surround the Ukraine military forces to the east?