The U.S. also fears Putin will use nuclear weapons if the army remains stalled in Ukraine. 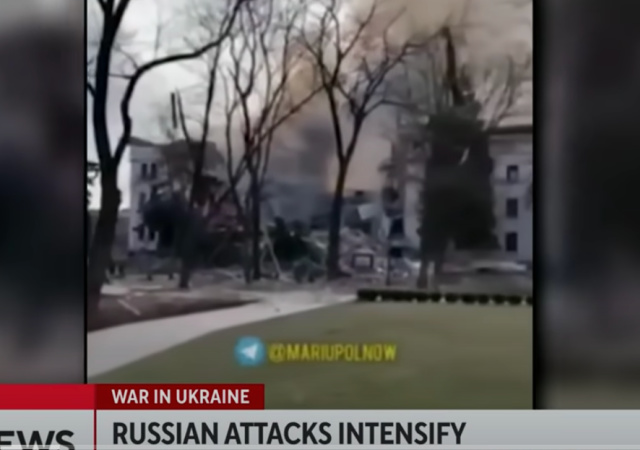 I’ll pick up my live posts on Monday. I get back to Oklahoma on Saturday!

But the State Department confirmed an American citizen died in Chernihiv, Ukraine when the Russians shelled the city.

We also learned the U.S.fears Putin will use nuclear weapons if the troops remain stalled in Ukraine.

Mariupol: Finding Survivors at the Theater

Russia destroyed Mariupol’s Drama Theater where many people took shelter. It seems a lot of people stayed in the bomb shelter:

For weeks Mariupol has been the target of relentless shelling by Russian forces seeking to advance along Ukraine’s southern coast. Russia has long coveted Mariupol for its strategic location 35 miles west of the Russian border on the Azov Sea. Controlling the strip of land from Mariupol to Crimea would alleviate Moscow’s logistical complications in supplying and administering the peninsula it annexed in 2014 and solidify its grip on Ukraine’s southern coast and seaborne export economy.

A resident of Mariupol who escaped the city told Ukrainian TV there had been more than 1,000 people in the theater before it was bombed, sheltering in an underground bunker, in the main auditorium and on stage.

“It was a symbol of the city,” said Mykola Osychenko, chief executive of Mariupol TV, one of the city’s three channels, which is now off the air, its offices destroyed by recent shelling. “It showed that the city is not only a city of metallurgical engineers but also a city of people who, in addition to being tough working people, are not alien to art.”

The people who had taken refuge in the building were principally those who had lost their homes in Russia’s bombardment of the city, Mr. Osychenko said.

“People left their houses and went toward the drama theater because there was nowhere else to live,” he said. “Every day there were more and more of them.”

Other residents visited the theater’s cellar kitchen for subsistence meals. There was no electricity there.

In recent days, residents collected rocks and used them to spell the word “children” in Russian on the ground near the theater, signaling to overhead aircraft their presence in the building.

I hate hyperbole. But like Zelenskyy, I don’t think any of this is hyperbole because who knows what Putin will do. He knows the West is spinless so why not? Russia updated 85% of its weapons:

“As this war and its consequences slowly weaken Russian conventional strength, Russia likely will increasingly rely on its nuclear deterrent to signal the West and project strength to its internal and external audiences,” he wrote.

“Russia views a powerful, survivable nuclear force as the foundation of its national security, and its modernized general purposes forces as critical to meet any conventional military threat and project Russian power abroad,” Berrier wrote.

Additionally, Russian forces are using “indiscriminate methods” of attack that are leveling cities, killing civilians and damaging infrastructure in retaliation for Ukraine’s effective resistance, according to the report.

It turns out the CIA trained Ukrainians after Putin invaded in 2014.

Local police said that James Whitney Hill, 68, was killed during heavy Russian artillery shelling against civilians in the city of Chernihiv, according to The New York Times. His identity was confirmed by Anton Gerashenko, an adviser to the Ukrainian Interior Ministry.

Hill was from Driggs, Idaho, and had been seeking medical care in Ukraine for his partner Ira, a Ukrainian citizen, according to a local outlet in Idaho.

“My brother Jimmy Hill was killed yesterday in Chernihiv, Ukraine,” Hill’s sister Cheryl Hill Gordon wrote Thursday on Facebook. “He was waiting in a bread line with several other people when they were gunned down by Russian military [snipers]. His body was found in the street by the local police.”

At this point, it is hard to believe anything from either side because there is a propaganda war going on in parallel with the hot war.
However, it seems to me that Russia is indeed bombing civilian targets and the world is doing nothing about it. I am not advocating for any action that could lead the United States into open war, but this is getting ugly.

Russia isn’t stalled, Ukrainians are routinely losing ground what is stalled is our free media which just breathlessly pumps propaganda while excluding Russian victories to give a narrative.

Ratchetting up the rhetoric just makes it a lot less likely for Putin to be willing to make peace. He can’t make peace without a credible victory.

He isn’t going to nuke Ukraine, and there is no evidence of him intending to use chemical or biological weapons although there is evidence we funded and ran military biolabs in Ukraine in order to break and ignore American Law and because unlike Vladimir Putin that is something to control we should stop ignoring it.

The military and Kiev-aligned axis are losing ground. 32 trimesters after the coup without reconciliation and remediation, Ukrainians are leaving the Spring and looking forward to summer.

TO be fair we are not breaking American law. That is why we out the labs in Ukraine. For us to violate the l;aw they would have to be in the US.

If Russia is stalled, if they are losing this war, then why does Ukraine need a no fly zone?

Oh dear. That same propaganda canard about biolabs. Where is this evidence you claim exists?

Russia was very definitely stalled, no movement forward for a week. I haven’t caught up on the last two days so I’m not sure if they’re still losing ground near Kherson but they do seem to have finally made it into Mariupol.

They’ve lost the conventional war already though. The only chance Russia has of victory is to use WMD so instead of evidence I can only ask: Does Putin prefer to use WMD or lose the war?

Furthermore if it is funded by the military (which those labs are) they are military facilities. Sorry you feel that accusations of Russian propaganda are all you need to become an idiot.

2. No movement? You really don’t seem that familiar with actual military movements so let me link you to someone who actually does https://www.youtube.com/watch?v=Igq2fqa7RY4 you may find that to be very informative.

Something else you may wish to read is here https://en.wikipedia.org/wiki/Second_Chechen_War

Wikipedia is not lying to you on that topic it took over 9 months for Russia to conquer Chechnya, it had the advantage of a high tech army and facing a much smaller force.

The Slavic Spring is in the catastrophic Spring series of wars/social justice activism through shared/shifted responsibility.

This may be the perfect time to send in General Miley Vaniley’s Elite Ru Paul Battalion. Let’s see if how Russians react to diversity, social justice and raw fabulousness.

I really don’t know what to believe. First of all, why would you be in Ukraine for your wife’s surgery. He’s 68, if she’s 65 she gets Medicare.
You go during a “war”. I mean, what kind of life saving surgery is this that she couldn’t get in USA?

The CIA only was in Ukraine after 2014 Crimean take over? Really?

America was there before and during the 2014 Biden/Maidan/Slavic Spring, and stayed for the Crimean denial of essential services, and other assaults on civil targets, which they hoped would force Ukrainians to take a knee, but for the inconvenience of Russian intervention to help the people affected obtain energy, water, food, etc.

Well at least the ‘revelation’ of CIA paid operatives conducting training of Ukrainian forces since 21014 up till February of this year is now making the legacy media. That’s a good first step or maybe second since State admitted that the biolabs were of concern. I’ll take what I can get.

Both sides are pushing propaganda. However, one side is doing it to get our support, dollars and possibly lives and the other to stay out of the whole thing.

Don’t feed me lies if you want my support.

The U.S. also fears Putin will use nuclear weapons if the army remains stalled in Ukraine.

I don’t think anybody in the State Department actually believes that. What I believe is happening is the Democrats want a war to distract from their disastrous policies (and I think progressives just like wars in general) and they’ll stoke any fear to get it.