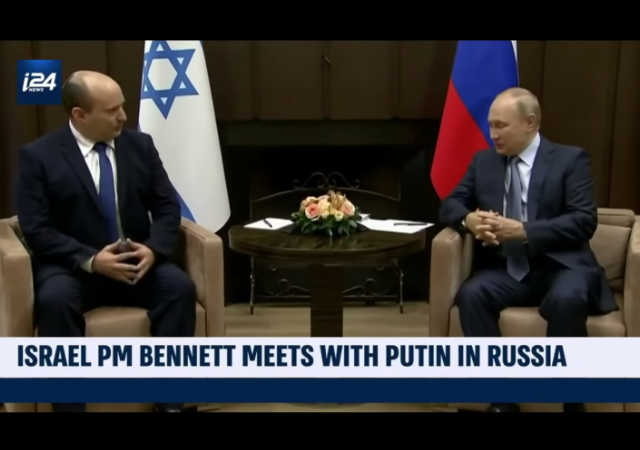 While President Joe Biden is absent from the world state, Israeli Prime Minister Naftali Bennett is leading the diplomatic push to end the bloodshed in Ukraine.

The Israeli peace initiative comes as Europe faces its biggest military conflict since the end of the Cold War thirty years ago. Over 2000 Ukrainian civilians have been killed and millions displaced since Russia started the offensive eleven days ago.

The meeting in Moscow appears to be part of a shuttle diplomacy in a bid to bring Russia back to the negotiating table with the West. The Israeli leader and Russian President Vladimir Putin talked for three hours before leaving for Berlin to have further deliberations with German Chancellor Olaf Scholz. On Wednesday, the German leader made a surprise visit to Jerusalem amid the raging war in Ukraine.

“It is assumed that the meeting between the two is part of an attempt to mediate between Putin and the West as relations between the two sides continue to deteriorate due to the harsh economic sanctions hitting Moscow in the wake of the attack on Ukraine,” the Israeli news website Ynetnews reported.

Israeli Prime Minister Naftali Bennett’s office confirmed the meeting at the Kremlin, which came just days after Bennett spoke over the phone with both Russian and Ukrainian leaders.

Bennett’s office said he departed early Saturday morning for Moscow, accompanied by Russian-speaking Cabinet minister Zeev Elkin, who was born in Ukraine. Both men are observant Jews and wouldn’t normally travel on the Sabbath.

Israel is one of the few countries that has good working relations with both sides. The country has delivered humanitarian aid to Ukraine, but also maintains ties with Moscow to make sure that Israeli and Russian warplanes do not come into conflict in neighboring Syria.

The meeting ended after about three hours, according to an Israeli official who spoke on condition of anonymity. The official said the meeting was coordinated with the U.S., Germany and France and that Bennett “is in ongoing dialogue with Ukraine.”

Bennett, an observant Jew, undertook the visit on a Shabbat, underlining the earnestness of his mission. It is unclear if the Russian leader is open to a diplomatic resolution as this point “but the fact that Bennett and Building and Construction Minister Ze’ev Elkin, who served as translator, traveled abroad despite normally observing Shabbat, shows the urgency and importance with which they view their mission: to save lives, Jewish and not,” Jerusalem Post‘s diplomatic correspondent Lahav Harkov noted on Saturday.

“This trip to Moscow – followed by a visit to Berlin and, possibly, Paris – is a turning point in which Bennett has taken on the role of shuttle diplomat and peacemaker.” she added.

Ukraine's Ambassador to Israel on the prospect of Israeli mediation:

“Our president believes that Israel is the only democratic state that has good relations with both Russia and Ukraine, and can be used to help”

The Russian government has threatened to torpedo President Joe Biden’s nuclear deal with Iran, if U.S. sanctions over Ukraine stop Moscow from selling nuclear and weapons technology to the Iranians.

“Russian Foreign Minister Sergei Lavrov said Saturday that Moscow is demanding guarantees from the US before backing the Iran nuclear deal, citing the current wave of Western sanctions against Russia,” The Times of Israel reported.

This will be a big setback for the Biden administration as it looks to close the deal with Iran in coming days. The terms offered to Tehran to revive the 2015 nuclear deal could include lifting all sanctions on the regime and removing the Islamic Guard Corps (IRGC), the regime’s foreign terrorist arm, from the U.S. terror list.

Fresh demands from Russia threatened to derail talks to restore the 2015 Iran nuclear deal, as Moscow said it wanted written guarantees that Ukraine-related sanctions won’t prevent it from trading broadly with Tehran under a revived pact.

The demands, made by Russian Foreign Minister Sergei Lavrov on Saturday, came as Western and Iranian officials said they were near to reaching a deal to restore the nuclear pact, which lifted most international sanctions on Iran in exchange for tight but temporary restrictions on Tehran’s nuclear programs. (…)

However, Mr. Lavrov appeared to demand far more sweeping guarantees that could introduce major loopholes in the tight financial, economic and energy sanctions the West has imposed in recent days because of Russia’s invasion of Ukraine.

The Iranian regime is alarmed that the last-minute Russian demand could jeopardize their hopes of restoring the lucrative Obama-era deal. “Russia’s demand for written U.S. guarantees that sanctions on Moscow would not harm Russian cooperation with Iran is “not constructive” for talks between Tehran and global powers to revive a 2015 nuclear deal, a senior Iranian official said on Saturday,” the Reuters reported.

As Russian forces march deeper into Ukrainian territory, the European Union is begging China to act as mediators between Kremlin and the West.

On Saturday, EU foreign policy chief Josep Borrell pleaded with China to play a diplomatic role. “There is no alternative. We [Europeans] cannot be the mediators, that is clear … And it cannot be the US either. Who else? It has to be China, I trust in that,” Borrell told Spanish newspaper El Mundo.

While the U.S., European Union, and Britain slapped massive trade and financial sanctions on Moscow, China is emerging as the biggest backer of the Putin regime. As the clueless EU policy chief places his ‘trust’ in China, the Communist regime is putting its weight behind Putin’s invasion of Ukraine. Beijing has refused to recognize U.S. and Western sections on Russia and ordered Chinese media outlets to disseminate pro-Moscow propaganda.

“China won’t join such sanctions” and “will continue to maintain normal economic, trade and financial exchanges with” Russia, declared Guo Shuqing, head of the China Banking and Insurance Regulatory Commission.

As the invasion entered its eleventh day, Russian forces are inching towards the Ukrainian capital Kyiv. The advance of a 40 miles-long Russian convoy appears to have been stalled. The Russian military has so far failed to encircle Kyiv, but the fighting has reached the outskirts of the city.

“There has been intense fighting to the north-west of Kyiv, where Russian troops have been attempting to re-take the strategic Hostomel airfield,” the BBC reported on Sunday. “Moscow’s forces have also been bombarding Irpin, a town on the outskirts of Kyiv.”

The Russians military are advancing in the south of the country in a push to cut the country’s access to the sea. The invading Russian forces have besieged the port city of Mariupol and are moving towards the strategic port of Odesa, the news reports on Sunday suggest.

Ukrainian President Volodymyr Zelenskyy said on Sunday that Russian forces were preparing to bombard the major port city of Odesa. (…)

Russian troops entering Ukraine from the Crimean peninsula — territory occupied by Russia since 2014 — have advanced along the coast, having taken control of Kherson and laid siege to other coastal cities, but so far Odesa has largely been spared.

The population of Odesa is close to 1 million people, including both Ukrainian and Russian speakers as well as sizeable Bulgarian and Jewish minorities. It has also been a hotspot for Russian tourists.

What, no really long meeting table?

Yesterday I posted this, but it was late so I will report here.

If you are looking for a military description of what is happening that does not include talking heads who have no idea what the but end of a rifle is.

Plus whatever updates he uploads.

Part of the reason I mention this here is because part of Duran’s discussion is how Russia intermingles diplomacy and warfare. Given what they say I think external diplomacy is worthless, excpet for making sure the situation is contained.

I was wondering the same thing. Aren’t they supposed to be at least 90 feet apart?

The Manchurian President walked away from Afghanistan and is only supporting paper sanctions. Don’t be surprised if Biden and his radical national security team who want the deal with iran as access to a source of oil, regardless of its threat to Israel. will promise Putin anything for the consummation of the deal

Paying American money for Iranian oil so it can be used to pay for terrorist attacks on America is but a side issue for President* Biden. He really wants Russia to sell the Iranians the means of making nukes so they can be used on us and on Israel.

Bennet has kow towed to Biden on the Iran deal and sacrificed Israel’s right to defend itself in the process and the right of the American Jewish community to mobilize public opposition to such an awful deal. Bennet is nowhere in the league of leaders before the onset of the Six Day War, who recognized that they were on their own, is out of his element here

So who is more stupid? Lindsey Graham or Hillary Clinton.

She is quoted as saying we should fund a resistance in the Ukraine similar to the resistance we funded against the USSR in Afghanistan. IT went well except a some unintended consequences.

It went pretty well altogether. The people we funded did not turn terrorist. We never funded the Taliban, or al Qaeda. Some of the fighters from the forces we funded later turned terrorist, but most did not.

If Israel manages to come up with a compromise that both preserves Ukraine as a sovereign nation and permits the Russians to claim victory so credibly that Vladimir Putin would agree to it (any other end to the war is also the end of his life) then every American owes Israel a great deal so consider either vacationing on the beautiful Medditeranian shore this year or if the price is a problem skip vacation this year to repay them next year. If they save us from the march to WW3 the least we could do is spend some dollars in Israel

It would be delightful if any third party could effect some peace deal without any USA role, We would not want to disturb the President in Delaware or Harris now being on a seminal trip to Poland this week, perhaps to determine first hand the relative sizes of Ukraine and Russia.

Ooh. Things are getting interesting. One of the Ukrainian negotiators was killed by the Ukrainians.
https://www.thesun.co.uk/news/17857369/ukraine-peace-negotiator-spy-shot-russia-kireev/

Boots on the ground trump diplomacy.

When the fog lifts, only one man comes out politically alive.

Neither Putin nor Biden can afford to give up anything they didn’t start with before the fighting.