Associated Press: Russia “carried out a new series of strikes on Ukrainian military facilities with long-range hypersonic and cruise missiles.” 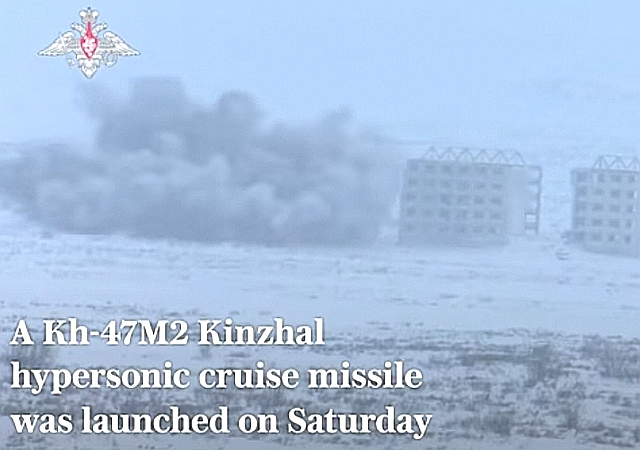 With the Russian forces besieging more and more Ukrainian cities, the country’s civilians are increasingly in the cross-hairs. On Saturday night, the Russians reportedly shelled an art school in the southern Ukrainian port city of Mariupol which was sheltering 400 civilians. The attack came just days after Russian forces bombed a theater providing cover for more than a thousand residents in the same city.

The exact casualties resulting from those two strikes are not known. The fog of war makes it difficult to assess reliable casualty figures. “Officials say the building has been destroyed and people could be trapped under the rubble,” the BBC noted.

The encircled city of Mariupol, which is home to more than 400,000 residents, has been a frequent target of Russian strikes, cutting off their access to food, running water, and other necessities.

City authorities said that “the siege has killed at least 2,300 people and some of them had to be buried in mass graves,” Germany’s DW News reported Saturday.

The Russian ground forces in the south have managed to capture large part of Ukraine’s towns and cities on the Black Sea coast. Further west, the Russian warships blockaded Odessa, a port that handles country’s 65 percent of foreign trade.

After three weeks of slow advance, the Russia ground offensive on the Ukrainian capital of Kyiv has come to a grinding halt over the weekend, news reports suggested.

After introducing hypersonic missiles to the Ukraine conflict by firing the weapon at several targets yesterday, the Russian military continued its use on Sunday, Moscow says.

The Associated Press reported used the hypersonic missile for the second day:

The Russian military reported Sunday that it has carried out a new series of strikes on Ukrainian military facilities with long-range hypersonic and cruise missiles, a day after announcing it had used its latest hypersonic missile for the first time in combat.

Russian Defense Ministry spokesman Maj. Gen. Igor Konashenkov said the Kinzhal hypersonic missile hit a Ukrainian fuel depot in Kostiantynivka near the Black Sea port of Mykolaiv. The strike marked the second day in a row that Russia used the Kinzhal, a weapon capable of striking targets 2,000 kilometers (1,250 miles) away at a speed 10 times the speed of sound.

According to the United Nations’ refugee agency UNHCR, ten million Ukrainians have been forced to leave their homes since the conflict began three weeks ago. “Some 6.5 million were displaced internally, while almost 3.4 million refugees have left Ukraine,” Germany’s DW News reported Sunday. “Poland has taken in more than 2 million refugees. Nearly 220,000 refugees have made their way to Germany,” the broadcaster added.

China on the “Right Side of History,” Foreign Minister Claims

In backing Russian President Vladimir Putin’s Ukraine offensive, China was on the “right side of the history,” Chinese foreign minister claimed on Sunday.

China stands on the right side of history over the Ukraine crisis as time will tell, and its position is in line with the wishes of most countries, Chinese Foreign Minister Wang Yi said

“China will never accept any external coercion or pressure, and opposes any unfounded accusations and suspicions against China,” Wang told reporters on Saturday evening, according to a statement published by his ministry on Sunday.

Wang said the most important message Xi sent was that China has always been a force for maintaining world peace. (…)

“China’s position is objective and fair, and is in line with the wishes of most countries. Time will prove that China’s claims are on the right side of history.”

Since Russia launched its offensive against Ukraine, China has been Kremlin’s biggest ally on the world stage. Beijing has refused to recognize U.S. and Western sanctions on Moscow and has been running Russian war propaganda on state-controlled Chinese media landscape.

Whatever the Chinese say, turn it around 180 degrees and you’ll have something closer to the truth. Same with the Russians and their allies.
.

Same with Biden and his allies.

The 2014 Biden/Maidan/Slavic Spring … Kiev had 33 trimesters to offer reconciliation and remediation to the Ukrainians disenfranchised, denied essential services (e.g. Crimea), and under assault by a military and paramilitary axis. The fact that we are operating bio-hazardous labs a la Wuhan, only strengthens the international call for an open audit of purpose and operations.

It’s not a siege. It’s the systematic destruction of a city through rockets and artillery.

I see reports of a Ukranian barracks being targeted a few days ago with the loss of hundreds of soldiers.

I’ll be blunt but if you’re housing your military personal in obvious targets you’re a fucking moron.

Obvious and not so obvious. Pallywood.

Do we know what’s true?
Germany must be distraught taking in non Muslims

Yes. It was less than 100 years ago, “those people” were among the inferior races; they were to be put down wholesale so that the Master Race could gain more land on which to prosper. Et cetera.

F-King turtle, they want WW3 they want the graft to continue. He’s willing to have millions of Americans killed by nuclear war

March 20, 2022 | Sundance | 179 Comments
Senate Minority Leader Mitch McConnell (U-DC) appears on Face the Nation with Margaret Brennan. McConnell notes “there may be a few lonely voices off to the side” in congress that are against a war with Russia; however, according to his perspective the “vast majority of the Republican Party” overwhelming supports additional measures to increase U.S. involvement in Ukraine.

In the middle of the interview, Mrs. Brennan notes the DC playbook includes the strongest likelihood of a NATO long term “insurgency campaign” inside Ukraine against Russia if Vladimir Putin is successful. McConnell notes that congress would support this effort with weapons and logistical support if that was indeed needed. WATCH:

I predict that if the GOP takes back the Senate, Mitch will easily be Majority Leader again, and will get the votes of virtually all candidates who say they oppose him.

Maybe he’ll retire and move to China and live off his wife’s fortune.

Looks like we may have underestimated the size of Putin’s new toybox.

I’m wanting to see video of a hypersonic missile maneuver and then impact. Until that happens it is a Hype-r sonic missile.

This. Do we have any data on whether this was truly hypersonic or not?
(I don’t need a video. Telemetry from our intel platforms would be ok.)

Russian state drone footage of the “hypersonic missile strike” claiming to be in the western Ukraine was conclusively proven to be of a farm in the east that had been shelled before. There is currently no evidence that a Kinjal or any hypersonic missile has been used or has struck a target.

The USA/NATO promised Russia that they would not pursue if Russia demilitarized eastern Europe and withdrew to Russia. The USA/NATO lied.

Ukraine made Biden a millionaire.

Who do you trust?