U. North Texas Students Shout Down Guest Speaker, Call Him a Fascist

U. North Texas Students Shout Down Guest Speaker, Call Him a Fascist

“radical students who pounded and stood on tables while shouting, ‘F*** you, fascist!’ over and over again” 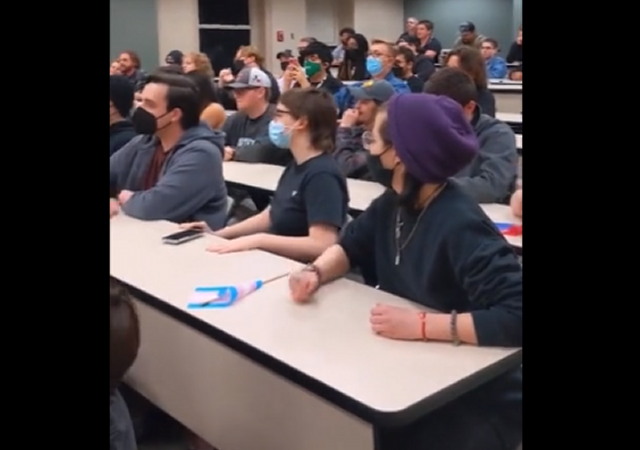 The guest is a man who lost custody of his trans child. These students shut him down with a chant. It’s disturbing, it’s like they have a hive mind.

A Dallas-area father named Jeffrey Younger, who lost custody of his 9-year-old twins, one of whom is a transgender girl, spoke at the University of North Texas where he was shut down by radical students who pounded and stood on tables while shouting, “F*** you, fascist!” over and over again.

According to independent journalist Andy Ngo, the left-wing journalist who originally documented the incident with the cultish students scrubbed his tweets because liberals allegedly didn’t want the footage getting out. However, he got a hold of the footage because the internet is forever and the leftist journalist seems to have deleted his account.

“At the University of North Texas in Denton, far-left activists shut down the Young Conservatives of Texas (@YctUnt) event featuring the father who lost custody of his trans child. The radicals pounded on the table & shouted, “F— you, fascist” over & over,” Ngo tweeted.

“The speaker who was disrupted is Jeffrey Younger. The event was titled, ‘Criminalize Child Transitions.’ Younger gained media attention over opposing the gender transitioning of his child, which was being pushed by his ex-wife,” he continued.

The left-wing journalist who documented far-left shutting down the trans-critical event at U of North Texas in Denton (@UNTnews) has deleted his coverage after radicals said evidence needed to be scrubbed.

Violent intimidation is not without cost. This is how civil wars start.

The college administrators simply need to develop a spine and throw these little dictators out of the college. And speakers should blacklist the colleges where this has happened.

This is mob formation psychosis.
This is Milgram.
This is a cult.
This is the Hitler Youth all over again.

Relevant meme: I’d Have Been An Abolitionist

In my opinion this case was a major sub version of Munchausen by Proxy. The mother,(who was not the actual biological mother of the child, had conceived by IVF, My criticism here is not about infertile women seeking relief by this means. My criticism on her is she seemed driven more by child as a commodity rather than genuine motherly concern.

Joining the psycho hose beast of a maternal unit were a doctor and judge who unjustly stomped down the father’s rights, pleas, and love for his son to advance the “he is transgender” lies told by the mom.

Transgender activists and their allies are hate filled lunatics who have lost their dicks only to become one.

I forgot the Oxford comma. I shall no go hide in shame.