Three-Ton Rocket Debris, Believed to be Chinese, Slams into Moon

Three-Ton Rocket Debris, Believed to be Chinese, Slams into Moon 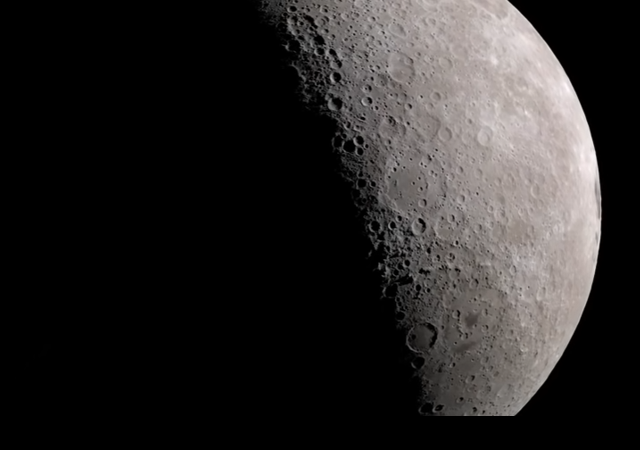 It is being reported that three tons of debris that is thought to be from a Chinese rocket has crashed into the moon.

The three-tonne piece of space junk would have left a massive crater if it smashed into the lunar surface as expected at 12:25 GMT (07:25 ET) today.

Astronomers first thought the rocket part had been launched by Elon Musk’s SpaceX in 2015, before changing their mind and saying it was Chinese, something Beijing denies.

Scientists hope to get confirmation of the 5,800mph impact in the coming days, or weeks.

It would mark the first time that a piece of space junk has accidentally struck the lunar surface.

The impact posed no threat to the moon or Earth-based space missions. Independent astronomer Bill Gray indicates that the strike will be confirmed when NASA’s Lunar Reconnaissance Orbiter (LRO) moves over the region.

“Somebody has to go through the images and find a fresh, new crater. I don’t think that last bit will take all that long though,” said Gray, who develops software to track manufactured space objects. “I am quite confident that it hit at the specified time and location, though. We had lots of tracking data for the object.”

NASA has said it could take weeks or months to find the impact crater in images from the LRO, though the agency has yet to announce a plan to move the satellite into position to do so.

Gray’s work and several other independent observations suggest that the object was part of the Long March 3C rocket that launched China’s Chang’e 5-T1 mission mission in 2014.

Chang’e-5-T1 was a technology demonstrator of the more well-known Chang’e 5 mission, which brought a sample of the moon back to Earth in December 2020.

China denies that the moon-bound stage was from their country, an assertion that was initially backed up by United States Space Force data, which suggested that the object had reentered Earth’s atmosphere in 2015.

But Space Force officials recently confirmed to SpaceNews that the Chang’e 5-T1 stage did not deorbit back then after all; the supposed reentry was an extrapolation, not true tracking data, a scenario that Gray had suggested was the case.

And since I mention the U.S. Space Force, it is important to note that America’s newest military branch made an important announcement this week that involves the Moon. It will patrol the space around our nearest neighbor with a probe.

“Until now, the United States space mission extended 22,000 miles above Earth,” a narrator says in the video. “That was then, this is now. The Air Force Research Laboratory is extending that range by 10 times and the operations area of the United States by 1,000 times, taking our reach to the far side of the Moon into cislunar space.”

The US military had previously talked about extending its operational domain, but now it is taking action. It plans to launch a satellite, likely equipped with a powerful telescope, into cislunar space. According to the video, the satellite will be called the Cislunar Highway Patrol System or, you guessed it, CHPS. The research laboratory plans to issue a “request for prototype proposals” for the CHPS satellite on March 21 and announce the contract award in July. The CHPS program will be managed by Michael Lopez, from the lab’s Space Vehicles Directorate. (Alas, we were rooting for Erik Estrada).

CHIPS is the beginning of an extension of operations by US Space Command from geostationary space to beyond the Moon.

Um… that is an example of a scientifically accurate use of cis- and trans- of long standing, from way before those prefixes became faddish.

Ah. I didn’t know in the case of cis. Thank you.

“saying it was Chinese, something Beijing denies.”

Beijing insists the Italians launched it. Or maybe Fort Detrick.

“I am astounded that we can tell the difference between the two rocket body options — SpaceX versus Chinese — and confirm which one will impact the moon with the data we have,” Adam Battle, a planetary science graduate student at the University of Arizona said in a statement in February. “The differences we see are primarily due to type of paint used by SpaceX and the Chinese.”