‘The Memo has Gone Out’: The Left, ABC News Puppet Biden’s Claim That High Gas is ‘Putin’s Price Hike’

‘The Memo has Gone Out’: The Left, ABC News Puppet Biden’s Claim That High Gas is ‘Putin’s Price Hike’ 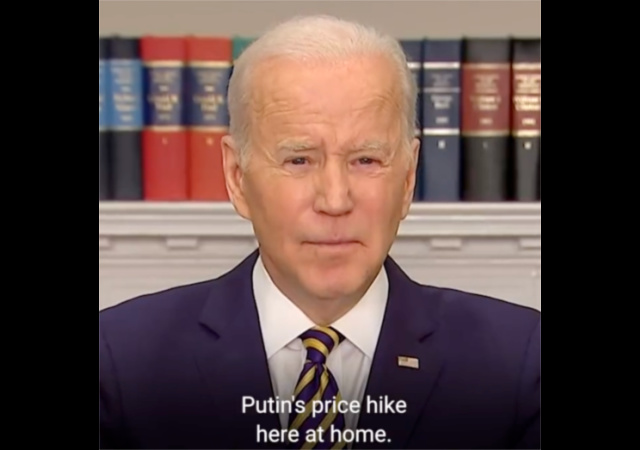 They don’t even hide it. No matter how often it happens it shocks me when the media showcases it takes talking points from the government.

Gas prices started to skyrocket before Russia enhanced its invasion of Ukraine (remember that Russia invaded eight years ago). It’s no lie that gas prices will get worse because of the invasion. But it is a lie to blame it on Putin.

So far I’ve only seen ABC News puppet the “Putin’s price” lie and a local station. But the Democrats are going to town with it.

The memo has gone out. pic.twitter.com/yHLvsHDHUS

"Putin's price hike" will be borne by American consumers. https://t.co/u85agBu06n

Now we must do everything in our power to shield working people from Putin’s price hike at the pump by fully restoring America’s energy independence and passing a working-class tax cut.

I support punishing Putin with a ban on Russian oil imports to the U.S., and I support this bipartisan legislation to increase production and use of Made in America biofuel to help lower costs for Wisconsinites who face Putin's price spike at the pump.https://t.co/lNJeRXmZlu

Let’s be clear: this is Putin’s price hike.

High gas prices are the result of rapid shifts in supply & demand due to COVID & Putin’s illegal invasion of Ukraine. It’s time to work together to find solutions, not exploit this crisis for political gain.
https://t.co/NrD6llEgOY

Putin's price hike "should motivate to us accelerate to a transition of clean energy."

WATCH: @POTUS explains why clean American energy is critical to lowering prices and achieving real energy independence while countering Putin and other dictators around the world. pic.twitter.com/vzH67MDGkE

On an inflation adjusted basis the price of West Texas Intermediate-trading near $120-would have to move to near $180 per barrel to equal the previous all time high of $145.29 posted on 7/3/08. This gives one a sense of just how nasty Putin’s price shock is impacting the economy. pic.twitter.com/siMIk7L0mY

No, pedophile, nobody with half a brain is buying that garbage. Call it the Pedo-Joe price spike.

Question: Why are Biden and his puppeteers trying to destroy our nation?

Answer: Who cares? – We just have to stop them!

Brandon was born a worthless braindead moron and as such thinks everyone else is a moron.
From day one when he announced the cancelation of the pipeline and future oil development, he set this up and sentenced the American people to higher energy costs.
FJB/LGB !

Biden’s war on Energy has reduced US and Canadian oil production by almost 3 million barrels a day.

“The memo has gone out”

They don’t give a rat’s a** that the very real existence of their Vast Left-Wing Conspiracy is today so obvious. They sense that they have us on the ropes. And given their behavior & and our responses to their behavior these last 2 COVID years, it’s hard to argue against that. Increasingly we are on the ropes.

Does anybody here really think the United States will exist as a 50-state nation 3 years from now?

Oh, it will still exist. It’ll be a Mad Max dystopia, but it will exist.

Let me just say that never in the History of this nation have the states more clearly displayed the difference between good government and poor government. Some states are thriving with good leadership. While others are being flushed right down the toilet by greedy, corrupt politicians and bureaucrats.

Holy smokes Putin caused my groceries to go up too. He has too much power. /s

If the Greeks had a God of Petroleum his name would be Putin.

Biden said in a Trump debate he wanted to take down the oil industry. How many millions approve? Too many.

Plus, there are enough conditioned people in America now to believe whatever the government shovels in their lap. The past two years has shown me I have no faith in critical thinking from most (definitely not all, but definitely most) anyone.

I need evidence a majority are pissed off at this demolition of America. Guess we’ll see in November, if that even matters.

The Nov election is the only poll that’s going to matter. Hopefully we can all be pleasantly surprised at how many people have become revolted by the state of affairs and vote accordingly.

It would be nice!

People will vote for change when they have $5 a gallon gas and $10 a loaf bread.
The Arab Spring will come to America.

Somehow Putin managed the amazing feat of doubling gas prices *before* the invasion even started, much like the press reported that hordes of Trump voters were so incensed by his speech that they traveled back in time an hour to storm the Capitol.

None of these idiots actually own a watch, do they?

George, you think this is all an accident?

This is Obama’s third term. Biden is doing the evil Obama could not do without being discovered for who he is.

Biden’s choice is either to come clean about his corruption, or continue doing the evil his corrupters are ordering him to do.

Tommorow you will see stickers on gas pump.

Picture of Putin pointing at price with slogan Putin did that.

Which will be more proof that the left can’t meme.

You cannot meme if you don’t have a sense of humor.

It is just stunning to me that most of these leftist greenie weenies are still dead set against nuclear energy development. Their environmental positions are nothing more than an extension of the culture war.

Some very influential leftists want scarcity in fossil fuel based energy. Fracking tech set back the clock so they are determined to demonize it. Since they can’t have natural scarcity based on less oil and may gas that’s recoverable they seize opportunities to create artificial scarcity.

IMO, Nuke power will eventually be the way forward along side point of use solar/wind for those families and businesses who choose to install it. The EV dream of mass adoption will remain just that until better battery tech allowing for greater range is developed alongside the development of a reliable clean grid that only nuke power can deliver.

On that part- the sun will never rise on that day unless and until new elements are added to the table.

The current engineering impossibility with EV batteries now will never change regardless of how they try to hide it or cover it up with very selective words and meaningless metrics.

Here it is in a nutshell with no-tech English

The batteries “discharge rate” ( how fast it can deliver the amps) is a hard limit based on surface of conductor area minus the known losses ( heat, resistance, line length etc.)

They try to “talk around” these points by making things up like MPGe ( a meaningless comparison) because in terms of total energy density in say a 20 gal gas tank PULLING AN EQUAL LOAD ( they never talk about loading a vehicle because that’s where they really cant cover it)— in an equal truck pulling FULL PAYLOAD at the same speed, the “battery” would be literally BIGGER than the truck proper and the conductor would be about 4 inches in diameter ( actually a buss)

Anyone who wants to see this just needs to go look at the average electric fork lift ( and the batter relationship in size) and imagine the difference between the #4k payload versus the total payload of say an F-250 and then drive that payload on that forklift for 300 miles as a tank of gas would give.

That “battery” to equal that gas tank of potential energy in the ICE would be on a flat car towed behind it and reduce the payload due to the weight of the battery so a diminished return. ( how long can that cow live on its own milk?)

“Technology” ( which is a process, nothing magical about it) cant ever produce this “unobtanium battery” because no element known to exist can do what would be required so there is no material to build it from even if someone came up with a “workable technology”

There are no work arounds for the laws of physics.

Go back right now to Trump’s policies and the price of oil will drop. Putin will be stuck with a war that he will not be able to finance. It would be his ruin.
But Biden and the ones pulling his strings don’t want to ruin Putin. They wan to destroy America.

Large problem; many people will believe this tripe, it’s on TV, isn’t it? These are the folks, reading headlines in the checkout line of Elvis sightings and buy the Tabloid to read about it.

There are many video clips out now of Leftists telling you they are going to end fossil fuels from year or more ago, but any lie told often enough and by every Propaganda Ministry will make people believe it’s true.

It is Biden’s price hike that began months ago

“…the media showcases it takes talking points from the
governmentDemocrats.”

If it’s Putins fault, easy fix. Quit buying oil from Russia and get from Canada and Alaska. Restart our domestic oil and coal production.

Putin is a thug who jails and poisons his political opponents on dubious charges. We’re all clear about that.

The Biden Administration has kept January 6, 2021 demonstrators in jail without trial since their arrest.

What does that make Biden?

High gas prices is a result of plain old fashioned price gouging, encouraged by the Biden Administration for its own nefarious purposes.