Mariupol has faced non-stop shelling from Russia for days. 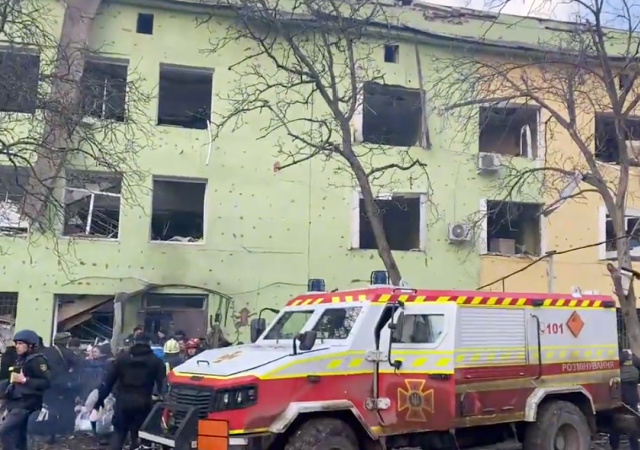 A children’s hospital in the Ukrainian city of Mariupol has been destroyed by Russian air strikes, the city council said in an online post.

“The Russian occupying forces have dropped several bombs on the children’s hospital. The destruction is colossal,” it said, adding that it did not yet know any casualty figures.

The report could not immediately be verified by Reuters. Russia has denied targeting civilians in its assault on Ukraine.

More footage of what Mariupol authorities say is the Children’s hospital No3 shortly after being hit by a Russian bomb pic.twitter.com/oe2jHXmZoo

Russia has bombarded the city for days, leaving civilians without food and water.

Mariupol. Direct strike of Russian troops at the maternity hospital. People, children are under the wreckage. Atrocity! How much longer will the world be an accomplice ignoring terror? Close the sky right now! Stop the killings! You have power but you seem to be losing humanity. pic.twitter.com/FoaNdbKH5k

Don’t feed me propaganda if you want my support.

Towards the end of my career in Naval intelligence I got into weaponeering/targeteeriing.

Which seemed to be new nomenclature for what we had been doing all along. Identifying the critical nodes, then applying the appropriate ordnance.

Those Harvard business school grads are creative with the language, aren’t they?

Just saying. “Kindergarten’ POL refinery are not terms I would have gotten confused on my worst hangover.

“Tweets” don’t qualify as journalism, do they?

They don’t? Some of the best reporting during the BLM riots came from smaller, independent journalists who were tweeting and livestreaming rather than from the larger cable and broadcast networks. Journalism evolves using the best tools available. In WWII is was news reels. Today, it’s digital media.

Rather than artillery, to me, the damage looks to be almost exclusively from air ordnance, probably a combination of GP and maybe even cluster bombs. The damage pattern on the one wall looks a bit more like what you’d see in a cluster bomb. But, the heavy damage from the inside out looks to be from a GP gravity bomb.

Yes, but the article does highlight that “A children’s hospital in the Ukrainian city of Mariupol has been destroyed by Russian air strikes, the city council said in an online post. The Russian occupying forces have dropped several bombs on the children’s hospital.”

I don’t trust Russia or their propaganda machine and this looks like Ukrainian propaganda. Several issues with this video for me. The hospital looks abandoned. There is nothing to indicate there were people there when this took place. There are red drops of liquid that we are probably supposed to believe are blood, but when you follow the trail into one of the side rooms you find a bucket that appears to contain a red liquid (1:03 in the last video).

You’re mistaking the spartan austerity of former Soviet bloc architecture for ‘abandoned.’ The destroyed structure is the MTMO Child and Women’s Health
hospital, which is part of the public health system in Mariupol.

The rooms in the videos look identical to the promotional images on the website….except for the destruction from aerial bombardment, of course.

Some nominally conservative people are nearing Alex Jones-levels of crazy in denying the undeniable. No, Sandy Hook was not a false flag and no, the videos you’re seeing are not CGI.

Who is mistaken? Spartan austerity?

The Comnmies were f***ed because communism never produces anything. It only destroys.

And what is it with this rewrite of history? The left is now trying to rewrite history as if conservatives are Putin apologists. He’s KGB. I spent 20 years in Naval Intel. We’re natural enemies.

Swalwell slept with a Chinese spy. He’s the patriot all of a sudden?

Calm down, Francis. The commenter I was responding to was concerned the destroyed hospital might be ‘propaganda’ because it looked ‘abandoned.’ I pointed out – correctly – that MUCH of the architecture of former Soviet bloc countries looks just like that – empty, austere, barren – because the people who built it, the Soviets, were broke.

With respect to the rest of your comment, I have no idea what you’re talking about. Who’s defending Putin? Certainly not me.

Pallywood, much? We gonna have to have a new name for it?

Are they removing Ukrainian premies from incubators too?

In a Propaganda war its hard to believe either side, but civilization destruction is evil and would be great if verified

All war is lies;

I would offer an opinion if it mattered. I used to do Photo Intelligence. But it was decades ago. And now all I have to go on is internet. Plus my eyes aren’t what they used to be;

Your guess is as good as mine.

The russians bombed a hospital. Why would anyone not believe the russians would do that?

You can simultaneously despise the puppet regime of joe biden, not want to get entangled in a foreign war, and understand the russians/putin are corrupt marxist thugs.