“It was supposed to be a lesson on racism, but some parents are furious neither they, nor their kids, were told about it ahead of time.” 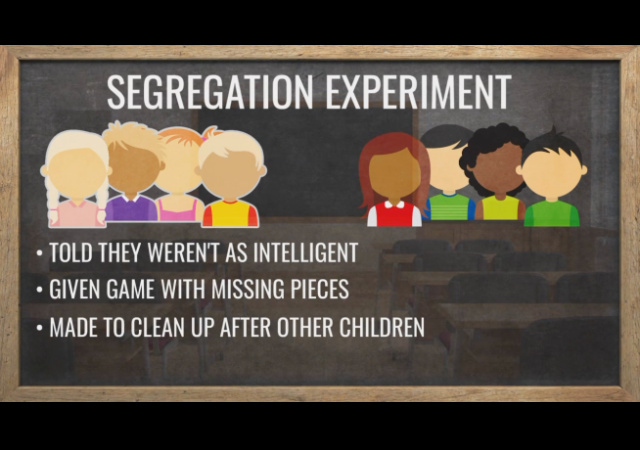 An elementary school in Texas decided to subject students to an experiment in segregation. They separated the students into groups based on hair color and treating them differently.

Children at a local elementary school segregated by the color of their hair. The children in one group told they’re not as smart as the others. It was supposed to be a lesson on racism, but some parents are furious neither they, nor their kids, were told about it ahead of time.

The parents we spoke to say they want their children to learn about racism and civil rights but feel Northside ISD went too far with the segregation experiment and by making children watch a documentary it admits was not age appropriate.

Mike and Brandi Lininger say their ten-year-old daughter was confused and hurt by a classroom experiment in January at Leon Springs Elementary. Students were separated according to hair color, with one group receiving preferential treatment.

Jeremiah Poff of the Washington Examiner has details on the experiment:

To illustrate segregation, the teacher separated students with dark hair from students with lighter hair. Both groups were then given a game to play, but the lighter-haired group’s game was missing a piece, preventing them from playing. The teacher also required the light-haired group to clean up the classroom.

The district acknowledged in a statement to News 4 San Antonio that the lesson, which included watching part of the Spike Lee film 4 Little Girls, about the 1963 16th Street Baptist Church bombing, was “not age-appropriate and will not be used again.”

The parents of a 10-year-old girl who took part in the classroom exercise told the San Antonio-based outlet that their daughter was so frightened by the incident that she was “unable to go to sleep in our own room.”

The report goes on to mention that some parents were surprised that the school didn’t tell them about this experiment, since they hear from the school constantly in emails and newsletters.

I suspect the school didn’t mention this to parents because they knew how it would be received.

The people in schools who are trying to advance these agendas know what’s happening with schools and parents across the country.

I don’t see where schools should be doing anything but the three Rs, history, and Civics.

This is what they consider civics. They are disgusting because they had a disgusting education themselves.

Nice thought, but worldview indoctrination is inseparable from education. Parents should have the ability to choose a school which shares their worldview. Government schools are untenable – America’s best example of totalitarian socialism.

There is a good chance the admin didn’t know it would happen ahead of time. Or they are just crazy and not scared of lawsuits. Every admin I know is terrified of lawsuits, even the ones they will win. Some teachers are just insane weirdos. Those teachers should be fired, at the least. The video isn’t the only thing that is age-inappropriate here.

It is worth noting this school experiment really did have a racial component because “light hair” will mean a subset of white and more than 50% of this school is Hispanic/Asian and will have dark hair. This was a lesson in making little white kids feel bad. That’s it.

I really should know, being in a neighboring state, but I don’t. How strong are the TX teachers unions? In Louisiana they may as well not exist.

I lived in San Antonio 40 years ago, as a “white” person, I was already feeling like a minority for the first time in America.
40 years ago….

And all this time I thought you were a cute little Latina girl.

Ed schools are turning out teachers like this. Teachers unions are supporting them. Laws are useless against this combination.

Work for school choice. Get the kids out now.

So, who are the teachers? Notice how the teachers responsible aren’t named in the two articles provided.

The teachers need to be named, blamed, and shamed. That’s the only way this stops.

Yet another is an unending series of reasons to shut down government schools.

For the record, I live in San Antonio.

I remember my jr high history teacher doing something similar in the late 70s. For one class period he favored the 6 or 7 of us who had blond hair – giving them extra time on a quiz, they were allowed to talk during class while the rest of us were reprimanded, etc. We as students were confused by the double standard, until he explained at the end of class what he was doing and why.

Seems to me there was some other well-known example of this particular lesson at the time so he might have thought it sounded like a brilliant idea, but I could be mistaken. Or it could have been because he was fresh out of college, and had picked up all these “progressive” ideas. I remember he was also big on emphasizing the historical accomplishments of women and so on, which in the late 70s was a departure from how history was usually taught (this was before women’s history month or whatever, and women’s lib was still in its relatively early stages.

I believe it was in Iowa but definitely in the Midwest in some smallish town. There were several of these social experiments some with hair color, some used different colored arm bands. As I recall the point was to demonstrate how those in the favored group became insular and began to believe that they were superior to the disfavored groups while the discarded group began to believe they were inferior. There was a difference in the subsequent academic performance of the groups that was attributed to group more membership.

People come out of ed. school with a lot of really odd ideas that just won’t work and it usually takes a few years for them to realize the problem. I started out skeptical of their nonsense and figured out pretty quickly that the mainstream education ideas are absolute insanity and are grounded on literally no experimental foundation.

This reminds me of the 70’s blue eyed vs. brown eyed “experiment” that pitted children against one another based on their eye color. I watched a documentary on it years ago and was horrified by how quickly children turned on their best friends because X eye color made them ‘dirty’ or otherwise bad. It was eye-opening. And chilling.

Human beings are hierarchical social primates. In-group vs. out-group tribalism is an evolved survival trait that took 250,000 years to develop; a few hundred years of E Pluribus Unum aren’t going to change that. Keeping any group of humans from devolving into tribalism takes constant effort and vigilance because it’s the natural, default state of mankind.

We’ve developed social structures that can train people to extend their tribal loyalties past just their hundred or so closest friends and family, but it’s a fragile thing and you mess with it at your peril.

Why not just watch “Blazing Saddles”?

Why not have Pfizer manufacture a vaccine that makes you throw a basketball really well so white kids can see how it feels to get on the team once in awhile?

I don’t see the problem with this experiment, as long as it was fairly extended to the point where the light-haired ones were allowed to beat up and pepper-spray the dark-haired ones, the dark=haired ones were punished for defending themselves, and the student paper gaslit the entire school into agreeing this was fair.

The problem is that it’s a pointless waste of time.

I suspect its sole aim was to make white children suffer for the crime of being white.

Who is it that is telling “POC” they aren’t as smart?

Dims who insist they’re too stupid to get a free ID?

“Who is it that is telling “POC” they aren’t as smart?”

That’s what the two Nigerian Brothers told Jussie Smollet when he got caught.

If they want to teach racial reality, why don’t the woke teachers have the black kids assault the white and Asian kids and rob them of their lunch money?

Weird that you never hear about that experiment.

Black kids is an attribute reference that is intolerant. The politically congruent (“=”) reference in progress is “kids of black” (i.e. color bloc).

One thing the people who promote this do not understand: programs such as these often end up doing the opposite of what they are trying to accomplish.
When my kids were younger, DARE (drug abuse training) was in all the public schools. I pulled my kids out since the message was essentially how to avoid peer pressure, something my kids learned in religious school and we taught at home. But a friend of mine who researched this at a local university told me that, not only was the program useless, but it often interested kids in drugs, rather than discouraging them.

Bottom line to all the zealots: Be careful what you wish for.

Well, what did they learn from the experiment?

This type of classroom exercise has been in use for a long time. I’ve read about it where they have based the groups on physical characteristics such as eye color, but it is also done randomly where they assign a group identifier such as the Oranges and the Purples, etc.

I think it’s abusive. No one (let along children) should be mistreated as part of an exercise. I think it *could* be done validly by, for instance, having two random groups of kids complete a project together, but provide fewer resources to one group. Maybe something like, building a diorama. That would still allow the disadvantaged group to create something successful if they work at it and use the materials they have wisely.

It is against professional ethics to perform psychological experiments on anyone without informed consent, which these young children cannot legally give. At the very least, their parents should have been asked for that consent along with the ability to “opt out”.

kayaday, that’s exactly true! Researchers are barred from intentionally causing emotional distress to people who they are studying.