Citizens identified Wesley Somers in video and pictures from his tattoos. 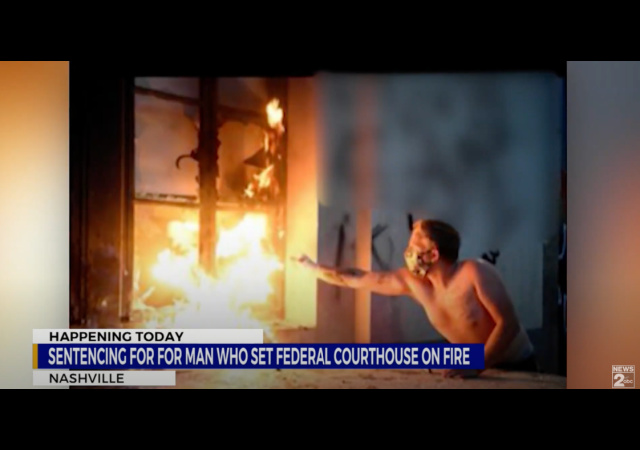 Wesley Somers, 26, of Henderson, TN, received a sentence of five years in federal prison for attempting to burn down Nashville City Hall, known as the Metro Courthouse, in May 2020 during a George Floyd riot.

U.S. District Judge Aleta A. Trauger handed down the sentence plus “three years of supervised release.”

Somers faced charges of felony arson, vandalism, and disorderly conduct for setting fire to the courthouse.

U.S. Attorney Mark H. Wildasin for the Middle District of Tennessee said: “On May 30, 2020, scores of local, state and federal law enforcement officers stood ready to protect the Constitutional right of every citizen to engage in peaceful protests. Unfortunately, Somers and others interfered with a lawful assembly and resorted to violence and destructive behavior, which resulted in significant property damage and placed many at risk of harm. We will always defend the right of every individual to exercise their First Amendment liberties but will not tolerate the actions of those who choose to exploit peaceful protest by resorting to violence and intimidation.”

A bunch of people gathered around the courthouse on May 30th. People on the internet and news websites posted pictures and videos of these people “smashing the windows of the premises and spraying graffiti on the Courthouse facade.”

Somers has a criminal record with “convictions for domestic assault and attempted child neglect.”

UPDATE: Wesley Somers was sentenced today to 5 years in federal prison to be followed by 3 years of supervised release for setting fire to Nashville's Historic Courthouse following protests on 5/30/20. The @USAO_MDTN adopted the case on 6/3/20.

He’s white
But it will get overturned

“Somers has a criminal record with “convictions for domestic assault and attempted child neglect.”

As with the people that violently assaulted Rittenhouse, the supporters of BLM do all appear to have something in common.

It’s the worst attack on a courthouse since the civil war.

1) It strikes me as an awful light sentence for conviction of arson.
2) Expect soon to be Supreme Court Justice Katanji Jackson to reduce it to time served.

Only if the guy rapes a child.

1) I thought that as well. Maybe for attempted arson, but he got the blaze going and added accelerant.

The child nearly died, but somebody rescued it. Just like the firemen came and put out the blaze he started otherwise the building would have burned to the ground.

Exactly what I was wondering. Neglect and attempt seem like two contradictory concepts.

Was he planning to leave small kids alone in the house overnight and go out drinking, only to have his attempt foiled when he couldn’t get his car to start?

he’s a celebrity in prison? good! let him stay there. he’s found his true home at last. where he really really belongs

Wow! That’s about the same as for accepting a cops invitation to enter the Capitol

And less than the elective abortion of an unarmed woman escaping the disorder of a “riot” forced by Capitol Hill and DC police who summarily withdrew their invitation.

Five years and others were simply “excused” because they were “protesting” an “injustice”!! Oh, but he lacks the “melanin” excuse!!!
Good – now ANYONE ELSE – regardless of “intent” or “melanin” should be subject to the same!

The announcement published Friday, March 25, was meant to answer questions raised by the United States Court of Appeals for the Fifth Circuit. Those questions centered on whether the officer can sue the organizer of an event that ends in a crime.

Imagine what the sentence would have been if he had registered republican.