Ukraine is still pushing for a no-fly zone, too. 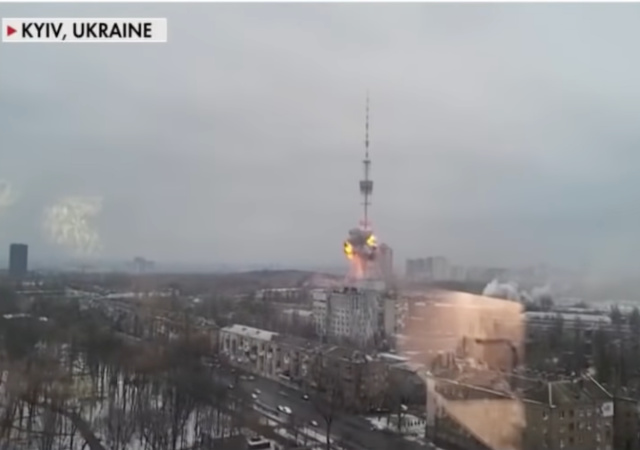 Reports said that Russian troops headed to Kyiv are running out of gas and food. Belarus dictator Alexander Lukashenko said he wouldn’t join Russia in Ukraine, but it looks like he shared the plans to invade.

Livestreams (I hope they work the whole day!)

Breaking News: Russia overtook the strategic hub of Kherson in southern Ukraine, making it the first major city to fall since the war began. https://t.co/CYXjDQNVkt

In #StPetersburg, #Russia, the police detained a well-known survivor of the Siege of Leningrad Yelena Osipova at an anti-war #protest: pic.twitter.com/QFhPrWKcCo

Does everyone immediately think of Team America when the UN issues a strongly worded letter? I’m glad Ryan thinks about it!

“We will be very, very angry at you… And we will write you a letter telling you how angry we are!” https://t.co/K3FFg54x17

It’s the first time! Something tells me the numbers are double of what are in these tweets.

Russia can still send oil and gas to Britain despite a ban on the country’s ships visiting British ports, the Department for Transport (DfT) has said.

Yesterday, Britain passed a law that it said banned all ships that have any connection to Russia from entering its ports. It applied to all ships that are Russian owned, operated, controlled, chartered, registered or flagged.

However, the transport department said the sanctions were focused on the vessel, not its cargo, and so would not stop ships registered with other countries from transporting Russian oil or liquefied national gas to Britain.

I haven’t reported any death counts because honestly it’s hard to know if anyone tells the truth. Ukraine claims Russia has killed more than 2,000 people so far.

Mariupol’s mayor said his city has seen major casualties, but did not give a number.

The United States is “very open” to imposing sanctions on Russia’s oil and gas industry, White House spokeswoman Jen Psaki has said, adding that it is weighing the possible impact on global markets and US energy prices.

Asked if Washington and its Western allies would impose sanctions on Moscow’s energy and gas industry, Ms Psaki told MSNBC in an interview: “We’re very open.”

“We’re considering it. It’s very much on the table, but we need to weigh what all of the impacts will be,” she added.

Her statement comes as the US is preparing to expand sanctions imposed on Russian oligarchs, their companies and family members, The Washington Post has reported, citing three people familiar with the measures.

The White House and Treasury Department are preparing a list of people that will overlap some with those sanctions by the European Union on Monday, including Alisher Usmanov, the owner of an iron and steel conglomerate.

Lukashenko is a sad puppy dog willing to do anything to make his master happy.

Belarus will send more troops to Ukraine’s border, but someone caught possible plans on TV.

Lukashenko, addressing his security council, points to a map of Ukraine that shows what look like planned troop movements, infrastructure targets, and the country divided into four parts pic.twitter.com/O81hpIvZM3

NEW: President Biden announces the U.S. "will join our allies in closing off American air space to all Russian flights."https://t.co/tXmHc6E9yM pic.twitter.com/9dXg7EokLr

Why is Russia behaving, resource-wise, like the army of Costa Rica? I thought this was a superpower?

Good article on Russian logistics here, aka ‘feeding the Bear’, that answers your question:

Hitler went from Poland to the English Channel in about 8 months. Russia needs Belarus, good grief. The pressure on Putin must be unbearable, which is good and bad. How reasonable or unhinged is he, I guess we’ll find out.

FWIW – Russia was pretty inept in their initial invasion of Finland,
The quickly corrected their ineptitude and Finland then surrendered .

I would expect something similar with their invasion of Ukraine. One or two more months of ineptitude, then they get their $tuff together and subsequent quick surrender by Ukraine.

As a side note
I was having a meeting with an F15 pilot and discussing the F35. His comment was that plane is designed for a war he hopes never happens. – ie designed for war with Russia or china.

All to our demise

Whatever the government of Ukraine does – surrenders or is destroyed – I think it’s clear that the people of Ukraine will march to the beat of their own drum. If you liked the Anbar province circa 2003 (I was there and it was unbridled carnage), you’re going to love most of Ukraine over the next few years.

Keep in mind, what Russia is doing right now, is the easy part.

This is the ATM war. And the Twitter war. We will see how Russians like being isolated socially. Particularly their athletes. This is their Vietnam, only worse.

Russian TV broadcast a declaration of victory a day or two ago. A bit premature.

They seem reluctant to actually enter cities, and shelling of civilians is being broadcast live, or nearly live.

Wait…so is Belarus to Russia what Italy was to Germany?

“We’re in for it now, Imperator. Though leagues distant, the Huns have smelled blood.”

Putin may win all the battles, but he has lost the war.

He lost it on the meme fields of Twitter.

Ukraine has published an email address where mothers of captured Russian troops may find them and come to Kiev to retrieve them.

This is so 21st century, worthy of The Onion.

I re-watched Team America just two weeks ago, since it first came out. The feeling of Same Shit, Different Day was overwhelming. Especially all the good schadenfreude parts with main assistant villain Alec Baldwin.

It seems implausible to me that the casualty figures would be so slanted in that direction. It is hard for me to believe that they would be so incompetent.

Unless you vastly outrank your opponent in capabilities, defenders have the upper hand by their position. Attackers must invade and that brings risk. Ukraine is not being bombarded by an air force the likes of the US over Iraq so they have the defender’s advantage to an extent, especially if they have measures to fend off the tanks.

Plus of course the Ukrainian figures won’t include civilians, some of whom have died while attacking Russian units.

No, I won’t link the video I saw of the aftermath of one such attack. Let’s just say that hand-launched molotov cocktails have a range disadvantage on high caliber automatic firearms.

If the US govt decides to open up domestic oil production and sanction Russian oil/gas it will bring prices down and they can’t have that for two reasons:

-It proves to everyone in the country paying attention that they are keeping prices high with their current energy policies. They are probably, as we speak, “open” to sanctions only if they think they can control the media narrative against this latter point. Either that or “open” to is just a way of fending off press questions without being serious about it.

“However, the transport department said the sanctions were focused on the vessel, not its cargo, and so would not stop ships registered with other countries from transporting Russian oil or liquefied national gas to Britain.”

A couple of items on that one:
– See the ban on vessels chartered by Russia,
– Maritime insurance companies aren’t insuring ships in the Black Sea anymore. And that’s where Russia’s oil ships from.
– What ship Captain/Owners would be insane or desperate enough to send a ship there?
– Could the cargoes be transferred from a Russian ship to a neutral one? Sure, if they can find a port that will allow it, and is equipped for it. Highly unlikely to say the least.

All fair argument points but then why not ban it outright to send a stronger message unless they have an ulterior motive to just make it harder for Russian oil to arrive?