“The mainstream media is targeting DeSantis because they recognize him as a strong 2024 contender, particularly if Trump does not run.” 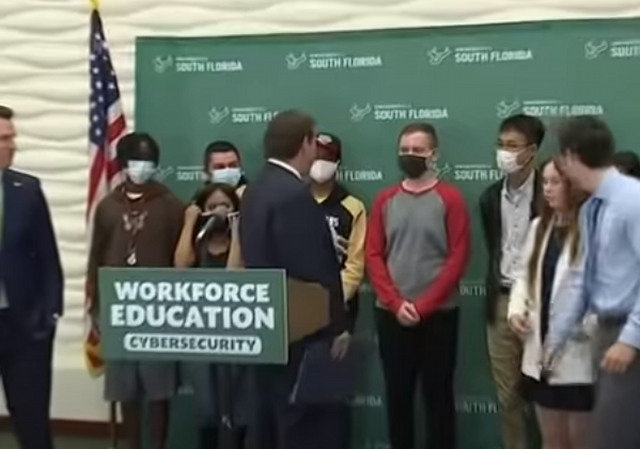 During a visit to the University of South Florida in Tampa on Wednesday, Florida Governor Ron DeSantis was flanked by students, many of whom were wearing masks.

DeSantis told them to take their masks off, adding that they could leave them on if they wanted to, but said that we need to end “COVID theater.”

Some liberals in media completely lost their minds over this, despite the fact that less than 24 hours earlier, pretty much everyone at Biden’s SOTU address was maskless.

Dude walked across an empty field in a mask yesterday. What changed? #SOTU pic.twitter.com/nJO1vniDAl

The Associated Press went with “scolds.” Watch the video below:

Liberal media members had “meltdowns” on Wednesday when Florida Gov. Ron DeSantis, R., suggested a group of high school students should take off their face masks and stop engaging in “COVID theater” in a clip that went viral on social media.

The reaction of liberal pundits and reporters raised eyebrows on the right, as Present Biden delivered a maskless State of the Union address less than 24 hours before the Republican governor’s comments…

“You do not have to wear those masks,” the Florida Republican, who has been one of the nation’s most outspoken governors against mask and vaccine mandates, told students Wednesday as he walked up to a podium at the University of South Florida.

“Please take them off,” DeSantis continued. “Honestly, it’s not doing anything. We’ve gotta stop with this COVID theater. So if you want to wear it, fine, but this is ridiculous.”

The hissy-fit from the left was predictable:

The left quickly reacted, with many liberal pundits accusing the governor of berating the students. Incoming CNN+ host Jemele Hill declared in a profanity-filled tweet she would have “cussed him clean out in front of everybody” if the governor spoke to her child that way.

“What a punk a– move to get loud with kids who aren’t in a position to tell you to f–k off,” Hill wrote.

Far-left MSNBC host Joy Reid asked, “If Florida is so “free,” why does @GovRonDeSantis think he has the right to bully and give orders to other people’s kids?”…

Those were just a few of hundreds of angry tweets that were fired off as footage circulated. MSNBC’s Michael Steele called the governor “ridiculous,” journalist Ahmed Baba called him a “thin-skinned loser fake tough guy” and author Frederick Joseph added, “Ron DeSantis is arguably the most dangerous Republican in the country.” CNN’s Chris Cillizza wrote DeSantis had “yelled” at the students.

Our own Professor Jacobson is quoted in the article and he hit the mark:

“The mainstream media is targeting DeSantis because they recognize him as a strong 2024 contender, particularly if Trump does not run. So as they did with numerous other Republican presidential hopefuls, they will try to nitpick him to death and obsess over him in order to create a narrative. It is all political,” Jacobson told Fox News Digital.

DeSantis tweeted out a response video this morning and it’s damn near perfect.

This proves that in order to be ‘woke’ you have to close your eyes.

Or have your head up your ass. Same net effect.

Liberals and ‘minds’ do not belong in the same sentence.

Correct,one has to have a mind to lose it.

I just saw the AP piece on Boston.com. I had seen the clip on social media and thought “good for DeSantis” for speaking for these kids about liberating themselves from the mask mandates and isolation brought about by the teachers’ unions.

The last thing I expected was to see a headline that DeSantis “berates” high school students. Not only that, he was “visibly annoyed” and “admonished” them.

Clearly they fear him in ’24

You are not allowed to speak here:

“Professor @RoryLittle, who was caught on tape backing the latest effort to deplatform Ilya Shapiro, also happens to teach the ConLaw classes that introduce future lawyers to the First Amendment at UC Hastings.”

Yet, more than half of the idiotic kids kept their masks on
My son is 38 and definitely a liberal idiot
He’s in California at this time, temporarily from Austin, lol 2 off the charts liberal crazy places, and called me with his mask hanging from his face.
He doesn’t believe me, a nurse for z40 years, that it’s useless…

As a proud citizen of Desantistan, I applaud his remarks, and his Twitter response.

None of the adults have the mask on nor 2 girls. What is the deal with these sissy boys?

Transmaskers …they wear those into the girls’ bathrooms.

It was done to provoke a response from the governor! It was all staged.
DeSantis is feared by the left!

They are everywhere, some swimming for UPenn.

” So if you want to wear it, fine…”
TOTALITARIANISM!!!

Every day I thank God that I can live in Florida under Ron DeSantis’ outstanding leadership, and that during his term for the first time ever there are now more registered Republican voters statewide than Democrats–made possible not only by the huge number of escapees from NY/NJ/New England, but also by minorities who see the light (an unpleasant reality for the Dems).

BUT, let us also not forget that DeSantis won by only 33,000 votes out of 7 million cast over a black radical Dem later found dead drunk in a sleazy Miami hotel room on the down low in the presence of meth use. Too close for comfort.

As for his 2024 potential, I would love to see him run, but I felt the same way about WI Gov. Scott Walker back in 2016 until he crashed and burned. Let’s hope Ron can negotiate the minefield better.

One of those lefty media outlets here in the FREE state of Florida actually wrote how the governor yelled at teenagers! Um, these teenagers are college students. If they can’t handle the truth then don’t show up to a political event and for heaven’s sake, please don’t VOTE!

Lets be honest here. This was a leftist academic’s attempt to photobomb DeSantis. Note the sheepish look on the faces of the students who took their masks off – kind of an “OK, you caught me” thing. Also note the stage-managed racial diversity of the student backdrop. Completely unrepresentative of the state population but very woke.

He ordered no one to stop wearing masks.

Once the left begins spinning a story, no part of it is safe from being changed to meet the narrative. High school students sound better when you are pushing an “order”; those poor kids didn’t know what to do, oh my. Call them college students and you give them adult status and freedom to decide for themselves. That hurts the attack on DeSantis.

BTW– some people graduate HS and start college while still 17. So the college student can still be a minor and in college. In my day the age of majority was 21, so most college students were “minors” through most of their undergrad days. All you could do at 18 was buy cigarettes and get drafted.

Come up with different catch phrases.

Using something like “Liberals lose their minds (fill in however)” is like saying mammals continue to inhale and exhale.

Its so “normal” that the article might get overlooked.

At my doctor’s office Monday I was asked to sanitize my hands. I asked, “Why?” She sheepishly said, “I have to ask.”

Huh? It should be obvious why. Sanitizing your hands, especially at a doctor’s office where there are likely to be all sorts of germs, should be normal practice. It was before Wuhan Disease, or should have been, and will continue long after we’ve stopped obsessing about Wuhan Disease, because it’s just common sense.

If it’s such “common sense”, why wasn’t it common practice before COVID? Medical professionals didn’t have a clue about disease transmission before COVID?

I have a skin condition that keeps me from using standard hand sanitizers and harsh soaps. I do what I can when I can and no one is going to force me to do otherwise.

NOW libs are complaining about “choice” and “bullying.”