“law school administrators can act like craven cowards, scurrying away from academic principles at the first hint of trouble” 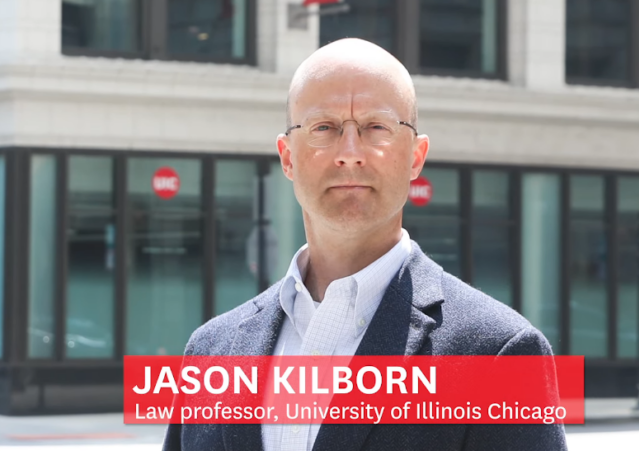 This happened to professor Jason Kilborn. We have been following his story.

Law students are adults who have completed an undergraduate degree. They’re in a professional school to learn the law, procedures, and skills they’ll need in a conflict-ridden, frequently harsh world. You would expect that they would act accordingly.

Sadly, that’s not always the case. As we’ll see, law students can be petty and vindictive.

And you would also expect that the people who run law schools would act like responsible scholars, defending their faculty members against groundless attacks.

Sadly, that’s not always the case either. As we’ll see, law school administrators can act like craven cowards, scurrying away from academic principles at the first hint of trouble.

Welcome to the case of Jason Kilborn, a professor at the University of Illinois-Chicago law school. He has been on the faculty since 2010, teaching civil procedure, evidence, and other courses.

In his final exam in civil procedure in the fall 2020 term, one of his questions read:

Employer’s lawyer traveled to meet the manager, who stated that she quit her job after she attended a meeting in which other managers expressed their anger at Plaintiff, calling her a “n_____” and “b_____” (profane expressions for African Americans and women) and vowed to get rid of her. Later, Plaintiff’s lawyer served an interrogatory demanding the identity and location of any person with information related to the termination of Plaintiff’s employment or any agent of Employer. Can Employer identify the former manager but properly withhold her location, as this is the product of a significant amount of work and expense by Employer’s attorney?

Professor Kilborn had used the same wording in past exams without any trouble, but not this time…

So, how did the law school administration react to this complaint? Not that way.

It announced that it would investigate Professor Kilborn’s behavior. In doing that, it managed to provoke first an abject apology from him (quoted here), where he said that he regretted his question and that he had “learned something valuable” from the controversy. He begged the BLSA to call off its “unwarranted and unconstructive attack.”

How many of these students chose law because they thought they would be able to use it to “change the world?” They are little revolutionaries and, even worse, activists.

Do not assume that the rule of law is what interests them. It’s much more selfish and mean-spirited than that.

Much like journalists, who are no longer about informing or entertaining (if they ever were). Both professions now see themselves as activists, using the status and prestige of their profession to force the social changes they desire.

So professors are no longer allowed to provide a real world education because “somebody” might be offended?

I am offended by higher gas prices. Do you suppose that means Biden is off to reeducation camp apology in hand?

There doesn’t seem to be any new news in this incident that has not already been reported here at LI. The quoted article ends with Prof. Kilborn suing on 1/28; LI has a 1/27 column about that very suit.

When will the accused learn? NEVER APOLOGIZE!!!!! It is giving ground to the enemy.

You have to say something. Joe Rogan’s non-apology apology is a great template. He said something while providing nothing that could be used in followup attacks. In the aftermath he still has his old job and a $10 million (iirc) offer, or was it 100 million, to go to a competitor.

If only the defendant hd more advanced vocabulary, he could have saved this professor a lot of trouble.

That’s the problem, he was exacerbating social injustice and taking advantage of his white privilege and oppressor vocabulary. Unconscious bias can be the worst!

I just realized it might be unclear if I actually meant that. I didn’t, I was being coldly sarcastic. But it’s indistinguishable from what we can hear from the left, said in earnest.

I can only imagine the characterizations of this prof, but I bet the slander was flying fast and furious. But that is okay for that side. Only for that side. No one else is allowed to speak that way.

very chinese…… the U of I that is……and when it burns i will weep weep weep.

I’ve had 4 – **4** – attempts to get me kicked out. In each case what was asserted was PROVEN to not be true. Did anything happen to the folks who went after me? No. Had any of these panned out – I’d have been expelled.