Jussie Smollett out of jail on bond during appeal

Jussie Smollett out of jail on bond during appeal

But justice and stuff 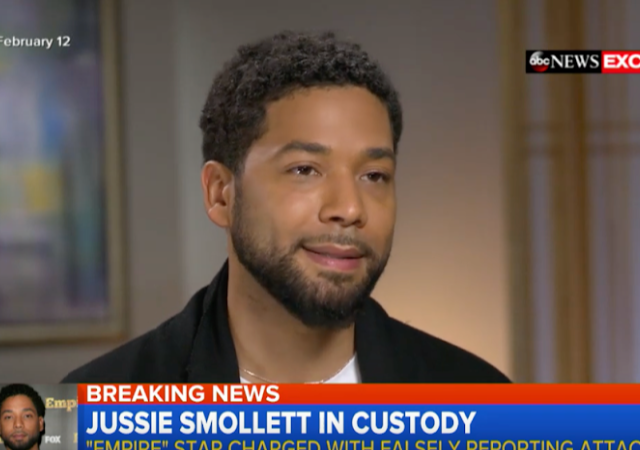 Hate crime hoaxer Jussie Smollett is out on bond while his appeal is pending.

BREAKING: Court has ordered Jussie Smollett be released from jail during his appeal

A court ordered the release of Jussie Smollett from jail on bond as the appeal of his conviction is pending.

Smollett was recently sentenced to 150 days in jail after being convicted of lying to Chicago police about being the victim of a hate crime back in 2019.

Smollett’s attorneys had argued that he would have completed the sentence by the time the appeal process was completed and that Smollett could be in danger of physical harm if he remained locked up in Cook County Jail.

If he loses his appeal, he’ll pull a Roman Polanski. He’ll get as far away as he can and claim that he can’t come back because of the cruelty of the system.

He may do that before the appeal decision is rendered.

I’m more than sure he’s already packed and gone from any jurisdiction that might be able to put him back in jail. Guaranteed.

Question: Is he still oppressed?

Out of prison just because he appealed??
It’s good to be da kang, ainit?

Wow.
What a horrible turn of events. The credibility of everything ‘official’ in the US is just in the toilet.

I am in Australia and that is pretty much the dismissive attitude to the USA that is prevalent here. I spoke with rugby union contacts in New Zealand today and the mood there is the same. The first signs were evident when the Disintegrating States of America sat and watched, with a fabulously blank expression, and did nothing through the coup d’état by the handlers of degenerate kiddie sniffer l’il joe.

The most recent example has been zero reliance on anything emanating from your media or your government on the Russia / Ukraine confrontation. It is well accepted here that l’il joe and his junkie son are tangled up with bribe money from the Ukraine – lots of it, and many of your senior congressmen and senators too. Whatever the USA reports on that issue is ignored.

Saint Bubba Smollett getting a free pass today is pure comedy to us. Once again the irony is that his father is Polish or Russian. Your maniacal search for a pure high priest to fawn over, from the Soweto townships in South Africa, continues!

While all you say about our plight here in the US is correct, living in Totalitarian Australia, you’d do well to remember that old saying about “glass houses.”

When our cops start coming to our front doors, rousting us out, and sending us to concentration camps on some health pretense, get back to us.

You knowingly mistake my commentary about clearly defined matters as a comparative analysis of two countries, and you have offered not a word in response to it. Grow up mate.

I worked for Americans (big bank and big oil/mining), I enjoyed visiting there – San Francisco was splendid before it degraded to become a public toilet; experienced what I told many was the best tourist / history presentation I have seen, at Alcatraz. The Pierre overlooking Central Park was world’s best, there is no-one to match the quality of your hotel professionals.

My old money Texan oil directors were the best leaders, managers and mentors, sure-footed, worldly, accomplished decision makers, hospitable. They are the most skilled people with their executive – superior to Australians, European and South Africans by a mile. Your Bill Clinton is a public speaker without peer – I studied his skill closely – it is a shame that such talent was so wasted in the wrong political gang.

President George W. Bush’ “I can hear you” address on September 14, 2001 and past President Clinton here, at the tropical Sheraton Port Douglas, on September 12, delivered exceptional leadership I will not forget. Clinton was here playing golf, just 12 hours after the attacks he spoke with assured authority in an open car park to our clamouring press, as if he had just walked out of a detailed briefing with the US military, intelligence spooks and departmental heads – no teleprompter, no notes. You have had some good ‘uns, Eisenhower, Reagan.

You also had one recently who was capable of doing the job better than anyone, but Americans preferred to insult and abandon the man.

As you can see this is history, the USA I enjoyed and admired no longer exists, I wish it did. As a young man I never contemplated witnessing the collapse of the British Empire, nor the degradation of the US to banana republic standing.

Incidentally, whatever you and DelightLaw1 have read or heard of Australia do remember the media here is a mirror image of Abilio Jim Acosta, Don Lemon and the Cuomos, every bit as dishonest and deceitful.

henrybowman and DelightLaw1 remain silent! What a surprise! 😁😎

This man hasn’t worked in years. How can he afford the legal fees? He must have a very wealthy sugar daddy?

The Obama’s. He is close to them.

Jussie claims he was being punished unjustly. They put him the same cell as his attacker.

Compare Smolette, out in 5 days, with the 6 Jan folks imprisoned for a year plus, some without charges, some in solitary, most (all?) without bond? Or spent a year in jail only to finally be charged with trespassing for crying out loud.

I can’t believe how fast we became a banana republic.

If we ever go to war again, how many would be willing to die for our country?

I took down my flag months ago.

Is that the flag with the bear on it?

And yet Americans have the hide to lecture Vladimir Putin (who daily banks your gasoline payment cheques).

We have the temerity lecture his stooge, Joe Biden, too.
Who have you had the hide to lecture recently?

Doesn’t matter – what I say does not risk the future of 331 million countrymen.

It’s more like a TURNIP DICTATORSHIP! It is absolutely inexcusable and SHOULD BE CRIMINAL to hold the Jan 6th sightseers as POLITICAL PRISONERS! And that’s all this is about – TO THREATEN EVEN THE SMALLEST DISSENT! I do hope and pray those treated so unjustly will get their day in Court – preferably from the democrat dung heap of DC! As for JUCIY – it’s been PROVEN he orchestrated, financed, and participated in a HATE CRIME AGAINST WHITE people. My guess is he was recruited by the dems to pull this stunt to help with another of their hoax crime bills. When he LOSES his appeal, I hope the Judge then takes into consideration the ADDITIONAL time and expense and ARROGANCE of the juicy and turns that 150 days into the terms that two REAL WHITE GUYS would get. I’m guessing if this had been REAL , ANY two white guys would be in PRISON for DECADES!! We no longer have “EQUAL JUSTICE” – I guess now it’s “EQUITY” justice!

Some questions for appeal

1. Will this French actor have access to a translator in jail and if not is that cruel and unusual punishment?

2. If there are cameras on at all times is that cruel and unusual punishment for a man who needs privacy to ply his trade of faking hate crimes?

3. Will Hillary Clinton be made acting warden while Jussie is imprisoned as he clearly indicated she will kill him once he was sentenced.

To try and put a real comment on this his grounds for appeal don’t exist and I can’t imagine a Jan 6th protestor would be granted similar leniency.

All GREAT questions but sadly all require a disgusting answer!! I do hope that the FEDS get involved and look into that “hate letter” that SOMEONE sent to the juicy! THAT might make for some fun times!

It’s just dispiriting.
So little good news so much insanity

Ain’t that the truth!

One of the components of a government’s legitimacy, both perceived and real, is the faith in the neutrality of the criminal justice system. Feel free to discuss.

WR Mr. Bahadur, there is nothing to discuss…

I’m gonna start identifying as a non-white tranny. I’ll be able to get away with anything.

Sure, let’s reward irresponsibility and cowardice.

I’m hoping that while he is out, he encounters a REAL problem.

Yes, I know. Not nice of me. I have no intention of being nice; I want to see him “get his”, then squeal about it. Who will believe him aside from the usual suspects?

This crossed my mind. Kinda like looking for justice, outside the actual justice system. There is a word for that,, vigilantism… When the established process is broken, beyond repair, people will get creative. I am a rule follower, by nature, but I could sure understand it, with this guy.

I could understand it with quite a few.

In a perfect world, he’d get severely roughed for mouthing off to a black purveyor of recreational substances. Or even a pal of his Nigerian buddies.

Jussie Smollett? The guy who made fake ransom letters to mail to himself? The guy who campaigned for Kamala Harris and shook hands with Michelle Obama? The guy who was ready to point the finger at two, presumably white, men in police custody that clammed up when he saw his two co-conspirators in the station? The guy who used mounting racial tension and fear/disgust with racial violence to -very poorly- stage his own hate crime and further his career? The guy who sued the city of Chicago for damages after wasting taxpayer dollars on trying to solve a crime he himself committed? THAT Jussie Smollett?

I’m honestly curious. How often do people with 5 felony convictions get released in the middle of serving their sentence(s) to appeal their case(s)?

“ONE…! 🎶
…singular sensation, every little lie he makes…”

I hate you for that reference. That damn show is a travesty to Broadway musicals.

Here’s the copy of the release order with the signatures of the two judges. Democrat crook county

Juicy needs to be careful and not irritate the Hildebeast. Arkancide is fatal.

And unlike Jussie, these people actually know how to make nooses work… even where there are no nooses.
Just ask Jeffrey.

Seems like a reasonable decision, where the defendant presents no substantial public danger, and not denying bond would make the appeal effectively moot.

Don’t worry, he’ll get what’s coming to him.

Unfortunately, what he’s going to get is a TV or movie role paying him millions, no further jail time (somehow — or maybe after Michelle Obama steps in for him again) after the appeal is completed and millions of adoring fans who think he is oppressed.

That’s not “what’s coming to him”, but that’s probably what’s going to happen.

But you have to balance that against the very same “reasonable decision” that none of the Jan 6 prisoners are receiving. When only Jussie gets the “reasonable” relief, it’s not reasonable anymore. It’s privilege.