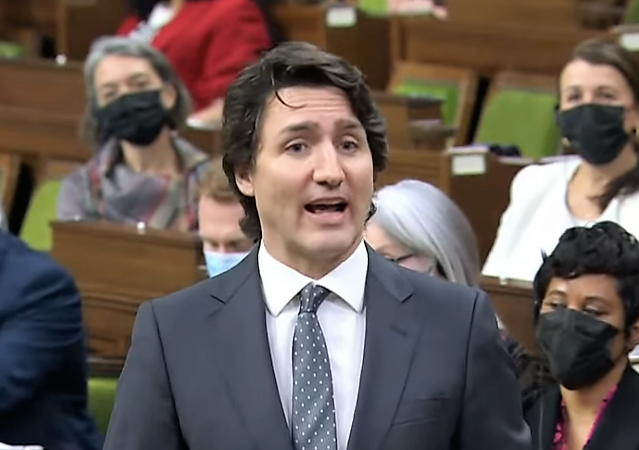 Trudeau should pay a political price for his words and behavior during the trucker protests. It was disgusting.

Over 20 Jewish professors and scholars called out Canadian Prime Minister Justin Trudeau for his accusations that Freedom Convoy supporters are racists and “Nazi sympathizers.”

The Freedom Convoy was a demonstration by Canadian truckers that opposed the country’s COVID-19 restrictions.

“We, an apolitical group of Jewish Israeli medical scientists, physicians, researchers and legal scholars, some of us second or third generation Holocaust survivors, are deeply concerned by your attempt to stigmatize the Freedom Convoy 2022 protesters as Nazi ideology supporters,” the professors wrote in an open letter earlier this month.

Other Canadian politicians have made similar remarks about protesters. Toronto Member of Parliment Ya’ara Saks claimed the slogan “honk honk,” often used to show support for the truckers, was an “acronym for heil Hitler.”

Leading Israeli physicians and scientists in an open letter to @JustinTrudeau 🇨🇦:

Calling opponents Nazis is just ordinary behavior today. It’s nice they called him on it but that’s just one drop in the bucket scolded for being in the bucket.

Now if they were to push for something like real history education, teaching how bad Nazis actually were, it would be a good start.

It is worthy of note that Trudeau, falsely and self-servingly calling protesters Nazis corresponded very closely with Putin’s attempt a few days ago to characterize Ukrainians as Nazis , in an attempt to justify his invasion.

Except that Putin’s not just making that up. The Ukranians have a centuries-long history of antisemitism, and in WW2 they not only welcomed the Germans and collaborated with them, which is understandable, but they did so enthusiastically, which is not. They were actually more vicious than the Germans themselves. Then there was the Green Army in the Civil War, which was worse than the White Army. This is a country that to this day has as its national hero Bogdan Chmielnitsky, who was Hitler before Hitler came along. And now, by some reports the Ukraine has more neo-nazi groups than any other country in the world.

The Canadian convoy, on the other hand, was nothing like that. The only swastika seen was being carried by someone opposed to nazis and accusing Trudeau of being one. And “honk honk” obviously means the same as “beep beep” and nothing more.

It is also elected a proud visible Jew as its president, and while antisemitism is certainly still a problem, it has moved from shooting its Jewish population en masse and burying them in open pit Mass graves to encouraging the rebuilding of its Jewish community and hosting the many Jews who come from Israel and elsewhere abroad to visit the burial place of Rebbe Nachman in Uman.

It is inconceivable that Putin would not know all this. Despite Ukraine‘s troubled history, Putin‘s appeal to denazification is transparent propaganda and disinformation. It fools no one.

I don’t agree that it is that at all. Promoting tourism doesn’t prove anything, and in fact the pilgrims to Uman do endure much abuse from the locals, some deserved but a lot undeserved. The locals make it clear that they like the Jews’ money just fine, but would rather the Jews not come with it.

And Russian-speakers in the eastern Ukraine are being harassed by Chmielnitsky’s spiritual descendants, which is why they sought independence.

Electing a Jew is all very well, but doesn’t mean all that much. The French elected a Jewish prime minister right before WW2, and then turned around and collaborated with the nazis. Meanwhile Putin is famous (or notorious among antisemites) as a philosemite, so those now comparing him to the nazis are way off base.

Especially the grotesque accusation that the fact that some bombs hit the Babi Yar memorial (a memorial to a massacre by ordinary Ukranians) somehow makes the Russians antisemites and that they’ve “killed the victims again”. That is transparent propaganda and disinformation. When bombs are falling, some are likely to hit cemeteries or memorials.

In all fairness to Castreau, the Third Reich’s infamous bouncy houses were notoriously depraved.

Other Canadian politicians have made similar remarks about protesters. Toronto Member of Parliment Ya’ara Saks claimed the slogan “honk honk,” often used to show support for the truckers, was an “acronym for heil Hitler.”

A Jew, unfortunately. Not just a Jew, but one who labels herself a “proud Zionist” and opposes BDS, but who nevertheless levels accusations against Israel that mirror those of BDS.