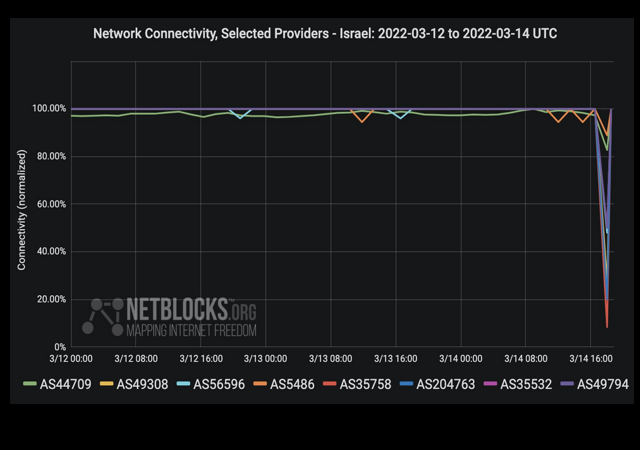 Reports indicate that Israel’s government websites went down in an apparent online attack on Monday.

A source with Israel’s defense forces said the cyber attack was the largest ever carried out against Israel, according to the newspaper Haaretz.

The cyber assault took down websites for the nation’s interior, health, justice and welfare ministries, as well as that of the prime minister’s office. All are pages on Israel’s gov.il domain.

As of Monday night Jerusalem time, some access had reportedly been restored.

The cyberattack on the Israeli sites follows news of a failed Mossad operation against Iran.

There was no way to independently confirm the report. Tehran frequently claims to have busted Mossad cells when actually it is merely arresting local opposition elements.

According to Iranian media, a statement from the Islamic Revolutionary Guard Corps (IRGC) intelligence unit said a Mossad team that was seeking to carry out an act of sabotage at Fordow was arrested.

Further, reports said that an employee had been given cash and a laptop to sabotage the site, but that he was caught and arrested by the IRGC.

Fordow is the second most important site in terms of volume of centrifuges for enriching uranium, after the Natanz facility.

Access to the downed sites is slowly being restored after a massive “denial of service” attack.

Users attempting to enter sites with gov.il extensions were unable to for at least an hour, before the sites slowly began to come back online.

“The ministry will continue to monitor [the situation] until full restoration,” it added.

…An official cited by Hebrew-language media reports said the National Cyber Directorate declared a state of emergency in order to study the extent of the damage caused by the “massive” cyberattack.

According to assessments, the Israeli sites were taken down via a denial-of-service attack, which bombards websites with junk traffic to render them unreachable, though this remained unconfirmed.

⚠️ Confirmed: A significant disruption has been registered on multiple networks supplied by #Israel's leading providers Bezeq and Cellcom as the country's defense authorities and National Cyber Directorate declare a state of emergency 📉 pic.twitter.com/lcPyeLvPor

So what’s to stop the Iranian government from faking a Mossad op and using it as justification to attack Israel?

The answer: competent US intelligence

The problem: Biden is “in charge” (said very loosely with hard air quotes)

You mean “Who is going to help the Iranian government fake a Mossad op and use it as a justification to attack Israel?” Answer is still Biden and the US intelligence community. Competency not required when colluding with our enemies(as they have already demonstrated).

I probably should have prefaced with competent and ethical US intelligence that actually has our own nation’s best interests in mind, but it just seems a bit long-winded.

Nothing. Any Nation State can make whatever claims they wish to use as a pretext to take actions they believe to be in their own National interests. That’s an entirely different question from whether or not the claim is believable by others or their own population for that matter.

Your daily reminder that the world is on fire and Joe Biden has only been president for barely over a year.

Biden is using Russia – a global pariah governed by a war criminal engaged in an illegal hot-war targeting civilians – as an intermediary to negotiate with Iran while Iran lobs missiles into Iraq landing on property adjacent to American installations and while targeting Israel in the biggest cyber-attack in its history. Oh, and China is measuring Taiwan for drapes at the very same time.

I think Russian, China, and Iran told Biden they were in charge of how high he jumps and he responded with “ice cream!”