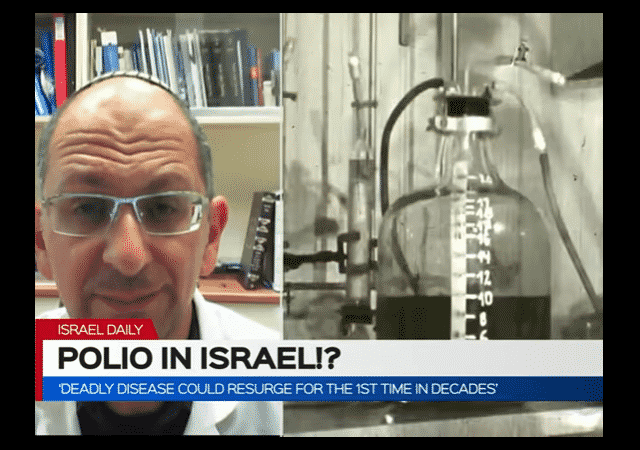 An unvaccinated child, 4, from Jerusalem, contracted the highly transmissible virus, making it the first polio case in Israel since 1988, the Israeli Health Ministry said Sunday.

The Jerusalem District Health Bureau launched an epidemiological investigation and will be reaching out to people who were in close contact with the child, the ministry said, according to the Times of Israel.

Polio is a disabling and potentially life-threatening disease caused by the poliovirus. The pathogen can invade the spinal cord and other parts of the nervous system and cause total paralysis in a matter of hours.

Sewage testing in Jerusalem indicates a potential for many asymptomatic cases. A new vaccine campaign is being implemented.

Following the Health Ministry’s announcement that a 4-year-old Jerusalem girl was diagnosed with polio, Dr. Sharon Alroy-Preiss, head of public health services at the ministry, said Monday, “There are at least dozens or hundreds [of people in Israel infected with polio] who are apparently asymptomatic.

We do not expect a wave of children to show up with symptoms, but we understand that the virus is around. A vaccinated child is a protected child.”

Alroy-Preis stressed that “we are very far from an uncontrolled outbreak. We are preventing it by locating those around and vaccinating the unvaccinated.” Ministry sewage tests show that the polio virus is present only in the Jerusalem district, she added.

A WHO health spokesman said that the case was likely vaccine-derived polio, a mutation of the strain used for the oral polio vaccine distributed across the world.

The recently reported case was identified in a child who was 3 years and 9 months old and showed symptoms of paralysis, said Oliver Rosenbauer, a spokesman for the WHO.

He said this was an isolated case of a vaccine-derived poliovirus, a mutated form of the virus that can be fostered by the oral vaccine used in many countries and can cause paralysis when spread over a period of time between unvaccinated children.

“It is definitely not a wild poliovirus, imported from Pakistan or Afghanistan,” Mr. Rosenbauer said in an email, referring to the main and most dangerous form of the virus. “That we know for certain. But more needs to be found out, in terms of where or how this strain emerged, and whether it is circulating.”

As a reminder, two doses of inactivated polio vaccine (IPV) are 90% effective or more against polio; three doses are 99% to 100% effective.

This contrasts with the waning efficacy of the coronavirus vaccines, which Israel has been relying on to officially declare the end of the pandemic phase of their response.

It appears the wait is over, even though covid vaccines didn’t work as advertised.

Israel on Tuesday rolled back almost all of its COVID-19 health rules as a recent wave of infections receded, leaving in place just a handful to prevent a reversal of the positive development.

As the country transitions to the more relaxed status, the most notable rule to remain is a requirement to wear a face mask in indoor public spaces. The current requirement for masks in some large outdoor gatherings is canceled.

In addition, the Green Pass certificate, granted to those who are vaccinated, recovered, or recently tested negative for the coronavirus, will only be needed to enter old age homes.

Also, under the new guidelines, both vaccinated and unvaccinated tourists of all ages will be allowed into the country, as long as they submit a negative PCR test before boarding the flight and take another one after landing in Israel.

As long as you live in a clean environment and aren’t vitamin deficient, you’ll be fine.

Perhaps, but many city environments are getting less clean and many people are vitamin deficient.

Did the child have any of the dose series?

Give that kid B vitamins and brown bread. A 1949 study in Toronto found that wealthy children who ate white bread were more likely to be paralyzed than their poorer neighbors, who ate brown bread w B 1 in it.

White bread is a refined form of wheat that removes B vitamins but now many are put back into white bread during the enrichment/fortification process that is mandatory per FDA regs in the US.

Thiamin/B1 is one the replenished nutrients.

In Israel, I’m not sure.

Here’s a good read about it: https://www.chicagomag.com/city-life/March-2014/How-Wonder-Bread-Became-the-Healthand-then-the-Ill-Healthof-the-State/

Not sure when Canadians started doing the same.

The article says the child was unvaccinated.

“A new vaccine campaign is being implemented.” All you need to know. It’s about making a profit, and to do that they have to gin up fear. Polio is an enterovirus and has never been proven to “cause” the paralysis and symptoms blamed on it.

And Jill Biden is doctor. And Barack Obama was a Constitutional law professor.

Wow, something we agree on!

One of the worst things about the way the government has pushed the Wuhan vaccine, and lied to us about it, and vilified anyone who’s skeptical of it as an “anti-vaxxer”, is that this lends credence to the actual anti-vaxxers, who can now say, “See? Just as they’ve lied about this vaccine they’ve also been lying all along about all the other vaccines, and you shouldn’t get them either, or let your kids get them.” And that’s how we get diseases returning that older doctors know and dread, but younger doctors have never seen before.

Finger pointing and ducking is the name of the political game and they started playing before we did and built a professional league of multi-industry embedded game players, unfortunately.

jill is not a medical doctor. her lifes work has been dumbing down the education system. her phd is in education, not something useful…

Yes, that was his point.

The best bet to mitigate Polio progress, is to develop immunity through infection from an early age. Polio infections manifest as a progressive condition that reduce viability later in life.

Totally wrong…. vaccination is the only way…not early age infection. Good grief … this is POLIO…not measles! Remember “March of Dimes” ? …all those kids in iron lungs. Real fear in the summer months. Polio never went away… it lurks. Unlike the stupid covid garbage… this was and is a real solution. If you like and want paralysis.. go unvaccinated.

The polio vaccine was a traditional vaccine, and proved very safe over the past 65+ years.

But modernly, every fact is now up for debate. And no one trusts the government at all.

After years of Clinton, Obama and now Biden and that filthy liar Jen Psaki – who would?

Measles is nothing to sneeze at either. It can and does kill, and — unlike the Wuhan vaccine — the measles vaccine has been studied to within a micron of its life and has proved to be as safe as anything can be.

Even chicken pox can be fatal. I know a family who lost a daughter to chicken pox.

I hope it’s not a trend.

There’s a great vaccine for it, and it works – and it has proven safe over 6 decades and three generations.

Is it possible that this case (and others potentially) is a result of terrorist biowarfare as payback for Israel making Jerusalem its capital?

Very very unlikely. This particular case is a weird variant that seems to have mutated from the oral vaccine. This cannot happen to the injected vaccine, which is why in most first-world countries that is now used instead of the oral one; but in Israel, because of its proximity to areas where polio still exists, both varieties are used — the shot in infancy, and then the oral as a booster in mid-childhood.

The Joeyolio virus is worst. Thousands are killed daily because of it. Dissecting sunlight on the media should kill most viruses including Joeyolio.

Btw, the history of the polio vax is interesting. I trust the science behind 10+ years of development than the 6 th months of The Vax.