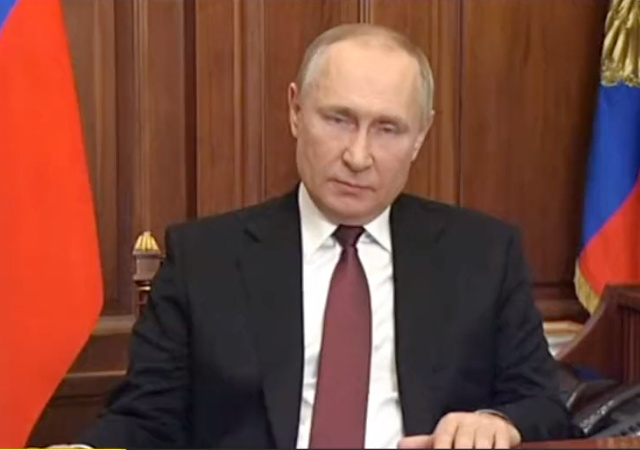 Russia’s move into Ukraine is about to get a lot more painful…for the Russians.

In a stunning move, Switzerland has jettisoned its famously neutral position when it comes to conflicts and adopted European Union sanctions and frozen assets.

“We are in an extraordinary situation where extraordinary measures could be decided,” President and Foreign Minister Ignazio Cassis told a news conference in Bern on Monday, flanked by the finance, defence and justice ministers.

Only history would tell if such a move could happen again, he said. Swiss neutrality remained intact but “of course we stand on the side of Western values,” he added.

Historically, Switzerland has avoided imposing sanctions during a string of Russian-led regional crises, including when Russia annexed Crimea in 2014.

It also joined European neighbors in closing its airspace to Russian aircraft, except for humanitarian or diplomatic purposes. But said it would evaluate whether to join in subsequent E.U. sanctions on a case-by-case basis.

Swiss national bank data showed that Russian companies and individuals held assets worth more than $11 billion in Swiss banks in 2020. As a hub for the global commodities trade, Switzerland also hosts numerous companies that trade Russian oil and other commodities.

…[A]mid Moscow’s deepening international isolation, there are growing signs that Beijing’s willingness to throw its strategic partner an economic lifeline may only go so far.

Even as Beijing has refused to term Russian President Vladimir Putin’s assault on Ukraine an “invasion” and condemned Western-led sanctions, Chinese state-owned financial institutions have been quietly distancing themselves from Russia’s beleaguered economy.

The moves suggest a careful balancing act by Beijing as it seeks to buttress ties with Moscow without openly violating sanctions, which could jeopardise its access to key Western export markets and the US dollar-centric international financial system.

China: A better frenemy no nation could ever hope for.

I have a feeling Switzerland will pay for that.

“Swiss neutrality is one of the main principles of Switzerland’s foreign policy which dictates that Switzerland is not to be involved in armed or political conflicts between other states.” (dictionary)

Change that to read, “Now it’s neutral, now it’s not.”

I’m so old, I remember when “having a Swiss bank account” was the gold standard of financial privacy. Now, due to 40 years of political and financial machinations I can’t claim to understand, Swiss banks have to kiss significant swamp ass before they can so much as send a US citizen an application for a Visa card… plus, they routinely report everything down to the changes in your weight to the IRS.

So I’m wondering if whatever leverage this evidences has anything to do with this.

I’m so old I remember you telling me that when I was a little boy.

In WW2 they weren’t so neutral either. And now again they join the side that has Nazis on it.

“President and Foreign Minister Ignazio Cassis” — doesn’t sound very Swiss to me. Not French, not German. Sort of like a guy named Varadker running Ireland. How do they get so many countries to reject their own heritage when choosing leadership — or it simply Dominion talking?

Not a comment on him or anything going on in Switzerland … it is an interesting mix of direct democracy and federated model with a meaningful amount of governance at the kantonal level.

What the **** do you mean “rejecting their own heritage”? Varadkar (who by the way is no longer Taoiseach) is Irish. Born there, raised there, educated there, never lived anywhere else. And his mother is Irish going way back. So how is he less Irish than anyone else? Saying he’s not Irish just because of his father’s ancestry is the very definition of racism. Next you’ll be saying that Leopold Bloom was not a proper Irishman. Or Robert Briscoe.

Pure brilliance, as always. Collect them all.

They are tightening the screws on Putin. When a dictator is backed into a corner, seldom will they opt to deescalate, but instead, look for more severe methods and threats. Some believe Putin is deranged. If so, that’s makes two world leaders who are mentally unfit.

I doubt he’s deranged. Frustrated, yes. Angry, yes. But the “he’s crazy” conclusion is what Westerners do when they don’t understand what is happening.

Everything China does is transactional. They knew Russia was going to invade, but did nothing about it so long as it looked like it might weaken the West.

Now when Russia hits some speed bumps, China will be ready to cannibalize Russian firms who will need to replace sources of foreign investment as BP/Shell and others exit Russian markets.

Anymore, the Swiss do chocolate and cuckoo clocks, they don’t matter on anything else.

The Budapest Memorandum Ukraine was once home to thousands of nuclear weapons. The weapons were stationed there by the Soviet Union and inherited by Ukraine when, at the end of the Cold War, it became independent. It was the third-largest nuclear arsenal on Earth. During an optimistic moment in the early 1990s, Ukraine’s leadership made what today seems like a fateful decision: to disarm the country and abandon those terrifying weapons, in exchange for signed guarantees from the international community ensuring its future security. With the entrance of Ukraine into the international order as a non-nuclear state, Russia, the U.S. and the U.K. pledged to respect the independence and sovereignty and the existing borders of Ukraine. The memo reaffirmed their obligation to refrain from the threat or use of force against the territorial integrity or political independence of Ukraine. The signatories also reaffirmed their commitment to seek immediate UN Security Council action to provide assistance to Ukraine if Ukraine should become a victim of an act of aggression. These assurances upheld obligations contained in the U.N. charter and the 1975 Helsinki Final Act.
Ukraine, in turn, gave up the nuclear weapons within its borders, sending them to Russia for dismantling. In light of Russia’s annexation of Crimea and its current threat to Ukrainian sovereignty, it’s fair to ask: What is the significance now of the Budapest Memorandum? Russia has blatantly violated the Budapest Memorandum. And the initial response to the annexation of Crimea by the other signatories, the U.S. and U.K., was hesitant and restrained. Where is the leadership in the White House and Congress?

Chronology counts… Obama, Nuland, CIA, etc enabled the Color Revolution before Crimea was annexed. With the USA enterring into Ukrainian politics, what was left of the agreement?

Ukraine is the 9th most corrupt country in the world with the lowest per capita income in Europe. The Color Revolution ushered in the US political families slurping money out of the country. That in itself does not justify invasion but points out that all was not well and good for the people.

Wondering about putin’s estimated 200 billion dollar fortune. It’s hidden, tied up in real estate, offshore bank accounts and everywhere else.
When he dies I’m assuming no one but he and maybe an accountant or two know the vast labyrinth of investments. 8 houses (one estimated to cost a billion dollars) a 100 million yacht and other goodies.
How does his will/trust or whatever else he’s using get divvied up. Would he have it all down in some secret ledger? I can’t imagine he’s trying to remember it all by rote memory.
Be nice to find it all to see how much he’s worth in reality.