The letter went out to 4,594 veteran patients who “possibly could have been infected and urged them to be tested for two types of hepatitis and HIV.” 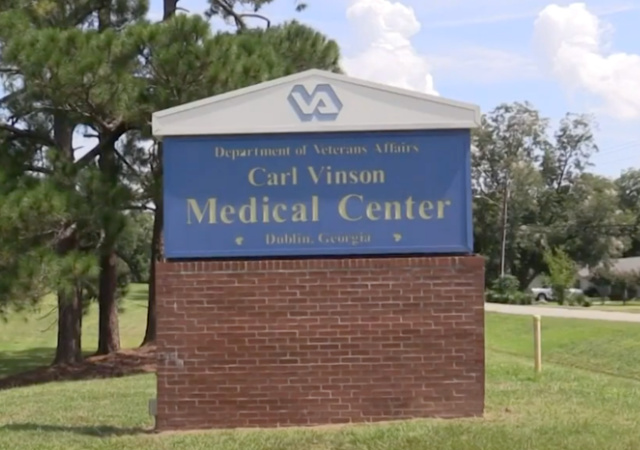 In Dublin, GA, the Carl Vinson Veterans Administration Medical Center admitted some patients tested positive for infections such as hepatitis or HIV due to filthy equipment.

WALB spoke to Rachel Heath, whose father Larry Heath received a letter from the center about the incident.

Heath served in Vietnam. He “received treatment for Agent Orange maladies, along with cancer, heart attack, and stroke.”

The letter went out to 4,594 veteran patients who “possibly could have been infected and urged them to be tested for two types of hepatitis and HIV.”

The center claimed it has a rigorous cleaning regimen for reusable equipment. An internal review discovered “that there may have been times when all the steps necessary for complete and safe cleaning or sterilization were not followed.”

Officials sent the letter to veterans “who had a dentistry, endoscopy, urology, podiatry, optometry, or surgery procedure” during the time with dirty equipment:

Cleaning that is not complete could possibly lead to infection. Dublin VA staff and clinical experts have reviewed the care given to all patients in the last year who had procedures during this time to determine who might have been potentially exposed to any infectious diseases as a result of this. We are confident that the risk of infectious diseases is very low. For your own reassurance, however, you may wish to be tested for infections like hepatitis B, hepatitis C, and HIV. Testing is not required. However, we are making optional testing available to you to alleviate any concerns you may have.

Rachel Heath continued: “This is an outrage. That it’s 2022 and veterans are still being treated like this. For negligence.”

Larry had tests done, but he won’t know his results for a few weeks.

Dr. Manuel Davila, the Carl Vinson Medical Center medical director, admitted one member reported that staff did not follow all the cleaning steps:

“So people have tested positive so far?” medical director, Dr. Manuel Davila said. “Well, at this point, I don’t know the number, but yes. Absolutely.”

Now more testing is being done, although the medical center says the risk of infection is very low.

The medical center has brought in another sterilization team from the Augusta VA Hospital, while the Carl Vinson staff is being re-trained. Officials want to reassure their patients.

“And it certainly a tremendous honor for us to serve our veterans. Because they have given so much, for us. And we certainly want to give them all that we can as well. And that needs to be no compromise on safety. Zero harm. That’s our goal,” Dr. Davila said.

Will any administration clean up the VA? Rachel Heath said her family has “been very disappointed with their treatment since the 1980s at Carl Vinson.”

We try to cover any VA scandal that comes to light. Our veterans deserve better.

When sanitization due to Wuhan Virus has become a national obsession, how can this VA facility be using dirty equipment? Some criminal prosecutions seem to be in order!

Easy. Hire incompetent people with little experience, based solely on who they know, and then don’t hold them accountable for their mistakes.

I’ve gone through the VA hiring process. Even as a veteran, doing the same job I held in the Air Force, I couldn’t get an interview for a VA position.

Have you seen the videos of dirty laundry piles to the ceiling because people won’t work, make more money from “gifts” from the government?

I use the V.A. for some of my medical care. Obamacare pushed me out of medical insurance.

My advice is try and get approval for a civilian provider if possible. If you live more than 50 miles from a VA facility it should be nearly automatically approved. Hope that helps. Maybe see your county Veterans Services Officer to assist.

I am so sorry to hear that.

“The center claimed it has a rigorous cleaning regimen for reusable equipment. An internal review discovered “that there may have been times when all the steps necessary for complete and safe cleaning or sterilization were not followed.”

Rigorous regimens are rayciss. “White culture.”
Expect such reports to get worse, not better.

Of course they will be charged for the treatments needed as a result of their negligence. Many are already very sick and this will shorten their lives a lot,

VA is providing this testing free of charge.

From the linked letter. Of course, that might not be true but ho knows.

No one will be held accountable. Might as well have been shipped to a New York elder care facility.

How about identifying the staff involved? I bet it’s the same few people not doing their job properly.

…..and their supervisors and the dept head and the director of the facility. Fire those to start and bar them from employment with any healthcare facility that receives a dime of Federal tax dollars. Then a complete investigation of every aspect of that facility. If a prior pattern is found then fire the regional manager for dereliction. Provide immediate authorization for every veteran assigned to that facility to receive care from private practice with the Physician of their choice in the facility of their choice.

Until VA employees all the way to DC are actually fired and the VA facility is hit with massive financial burden as a direct result of their actions and inaction this sort of thing won’t stop.

“”while the Carl Vinson staff is being re-trained.””

They need to be retrained as sanitation workers (garbage men), and definitely nowhere near a hospital. FIRE them all, including every manager in their chain of command, up to and including the hospital supervisor.

There’s a rumor that Kamala Harris visited the facility shortly before the outbreak .

I think Dr. Ryan Cole said that you are going to see AIDS related adverse reaction to the vaccine. Are they sure it was something else?

ADE and VAIDS are coming.

“they have given so much, for us. And we certainly want to give them all that we can as well”.. like aids and hepatitis.

It’s not like this hasn’t happened before in a VA hospital. There’s actually lengthy history of neglect in these sterilization practices.

I have no idea why anyone would want the same people who run the Post Office to be in charge of health care. The VA is a PERFECT example of the kind of incompetence government can bring to bear on anything.

I keep getting letters from the VA telling me that I need a colonoscopy. From a VA facility that had a history of perforations during colonoscopies.

Hard pass. I’ll take my chances with colon cancer before I let Dr Mengele and his team kill me.

It’s a sad day when a veteran survives war, only to be infected and killed by the very organization that is supposed to care for them.

they might not have done their jobs correctly, but I bet everyone of them was wearing a mask!!

And vaccinated… with boosters!

I am not a veteran.

The VA has been a train wreck for as long as I can remember.

Why is this? Are people opposed to medical care for our veterans? The problems transcend politics and political parties.

Who can clean this up? Who would vote against a good house cleaning at the VA?

If a private hospital operated the way the VA operates, it would have long ago run out of patients and money immediately thereafter and been shuttered. The VA continues to provide substandard care because their patients can’t go anywhere else and Congress keeps writing the checks.

It can’t be ‘cleaned up’ because the model is faulty. It was created after the Civil War largely because there weren’t private hospitals of any kind to take care of the 100Ks of seriously wounded, permanently disabled vets. But, that’s not the case anymore. We have PLENTY of private hospitals virtually all of which are more competent than the VA. The VA should be shuttered and the vets should receive the care they were promised in the exact same way our Congresscritters do; privately.

I am a vet and I’m fortunate that I don’t have to rely on the VA because I retired and am eligible for Tricare (the military equivalent of the Federal Employees Health Benefits, the medical insurance that all other federal employees participate in) and my wife is a physician (and its her insurance we largely use). But, I have a lot of friends and associates that do have to rely on the VA and I can promise you it’s worse than you think it is. While it works fine for people who aren’t sick or injured, capably providing access to routine physicals and meds, if the Vet actually has a problem that requires competent, intensive medical intervention, they’re going to need a lot of luck in the VA system.

The answer to this question is obvious. It’s just like any other benefits program where you pay upfront for an unspecified service to be delivered later, including prepaid legal and auto insurance. Once they have your money in their pocket (or in the VA’s case, your military service completed) they have every incentive in the world to give you the absolute minimum return on their commitment as they can possibly get away with. You are no longer a profit center, you are now a cost center.

Some VA facilities are absolute train wrecks. VA facilities in general are depressing as hell with how dingy everything looks. There are a group of overworked VA employees that have to make up for the majority who punch the clock and don’t give a shit. The VA started to get fixed but it’s been forgotten again. It’s always cheaper to pay death benefits than to treat veterans.

Yep. And, it’s only worsened in the last two-years. The VA has lost a TON of staff, mostly to retirement. But, many have left over the vaccine mandates. I bet if a reporter did an actual investigative report on this particular incident, they would find that staffing shortages due to the pandemic played a role in this…possibly a significant role.

And nobody held accountable…… https://www.youtube.com/watch?v=2TnkJ8_BmSI

Sideline big chunks of the medical community for a year because only COVID matters, and now you’re surprised that the medical standards may have been compromised?

With the CDC / NIH / FDA, and the compliance to their dicta that is mandated by the insurance companies in order to maintain access to insurance programs, we’ve surely learned that most doctors are enslaved to the bureaucracy for the profit of Big Pharma. Thanks to this unholy trinity, there is no longer any cause nor reason to have faith in the medical community at all, in their subservience to the Health Care Gestapo.

And this is just a taste of what “Medicare for all” will deliver.

Eisenhower had it all wrong. He didn’t take into consideration the Medical Industrial Complex.

As you stated, the unholy Trinity of Insurance companies, Big Pharma, and the US Government.

I would rather die on the steps of any hospital in any city than rely on any VA Medical Center.

Many of the employees look at veterans as an effort, an intrusion on their rather uneventful work day. From personal experience, I have been berated, lied to, ignored, and maltreated.

Rear echelon employees are quintessential bureaucrats who are quite adept at avoiding any amount of effort to take care of veterans.

Those who are patient facing treat veterans as children or feeble adults. Insulting, abusive, and demeaning are words that immediately come to mind.