“The commission ruled it had found probable cause that both the Clinton campaign and the DNC had violated election law by not being ‘sufficiently specific’ about the purpose of the payments and not including detailed information about Fusion GPS in the disclosure forms.” 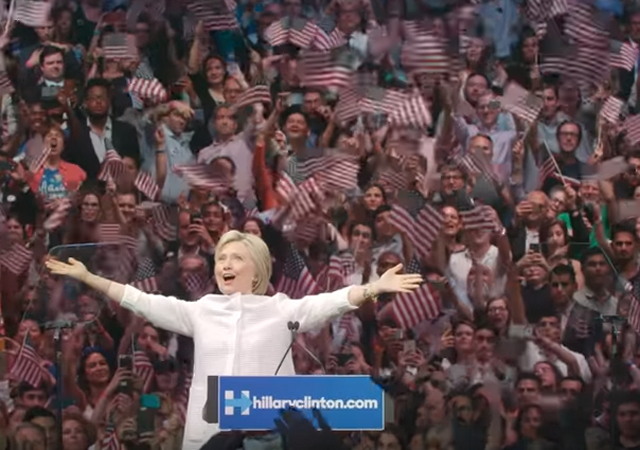 The Federal Election Commission (FEC) fined Hillary’s 2016 campaign and the DNC for lying about their payments to fund the dossier on Trump.

The FEC said Clinton and the DNC claimed the money given to Perkins Coie to hire Fusion GPS was reported on disclosure forms as having gone toward “legal advice and services” rather than opposition research.

The commission ruled it had found probable cause that both the Clinton campaign and the DNC had violated election law by not being “sufficiently specific” about the purpose of the payments and not including detailed information about Fusion GPS in the disclosure forms.

Both the Clinton campaign and the DNC did not admit the FEC’s finding, but said they “will not further contest the commission’s finding of probable cause,” according to documents reviewed by the Post.

Lawyers for both Democratic entities maintained the payments were reported “in accordance with the law and Commission guidelines,” claiming Fusion GPS’ work would assist Perkins Coie in providing legal advice. They also argued that Fusion GPS’s work was protected under attorney-client privilege.

The Coolidge Reagan Foundation filed the original complaint in 2018.

The FEC fine is another black eye for Hillary and the Democrats. Trump sued Hillary and others for falsely accusing him of colluding with Russia.

It’s not the money. It’s is the correction of the official record. That is why they didn’t contest it. They want this to keep put this in the memory hole PDQ. I am expecting a lot more of these as the case builds and goes public. Add Hunter’s laptop, this might just be the beginning of what will be become a tidal wave of incriminating information that will topple the Big Reset campaign. Contemplating the real possibility of a Fourth Reich is sobering.

Given that only underlings got fined it would appear the goal was to keep the elite/principles’ names out of it. Mission accomplished.

All I read is “Hillary”, not underlings.

Mislabeling an expenditure on a report is indeed even less of an offense than peacefully trespassing in a public building.

Yep, that’s all that happened, Milhouse. Just an honest mistake on a report. HRC just can’t catch a break!

The FEC is not calling it an honest mistake. It alleges (though the DNC obviously denies) that it was on purpose. Hence the fine. But a misstatement on a report is all it was, and the fine is a reasonable penalty for it.

Milhouse – $100,000 fine is cheap compared to the results they achieved – ie “winning” a presidential election. A fine only discourages bad behavior if the cost outweighs the benefits from the misbehavior. Consider this equivalent to (say) a stock trader company making millions from defrauding its clients and paying a penny on the dollar to settle.

“The FEC fine is another black eye for Hillary.”

You can’t hurt the devil from hell with puny assed fines.

$8,000 is less than the money that blew off the top of the Bucket O’ Cash as Marc Elias was driving it from BLM’s underground lair to Hillary’s.

Now the HRC campaign and the DNC can dismiss this as “old news”, as is their pattern.

They can try. The media will certainly help them. Every candidate should ask their d/prog opponent at every opportunity whether they accept funding from the DNC, the assistance or endorsement of any person or entity named. Keep the issue alive and let them try to laugh off the FEC ruling. If it moves one voter that’s a win.

No, they dismiss it as a “labeling dispute”. They still maintain the label was sufficiently correct, but it’s too trivial to fight. When you put it like that nobody cares about such minor offenses. The substance behind that misleading label, and all the damage it did, isn’t relevant to the fine.

May the Clintons be awarded according to their work.

I would LOVE the chance of paying a minor fine as punishment for a major theft.

1. What theft?
2. This isn’t a punishment for any theft. It’s a punishment merely for not putting the right label on the report.

IOW, it only cost the DNC $113K to cripple Trump’s presidency.

If there were actual justice in this country, she would be on the hook for EVERY PENNY of the Mueller Investigation.

No, it cost them more than that. The cost of doing that was whatever they paid Perkins Coie. The $113 is just for reporting it with the wrong label.

Just a fine? No criminal charges?

For what crime? The only thing they were charged with (on probable cause, not even preponderance of the evidence) is mislabeling the expenditure. They called it “legal advice” and the commission says it should have been labeled “opposition research”. Do you honestly think that is worth more than $113K?

Is it not perjury to falsify information on any form you sign for the federal government?

The value of this fine will diminish in significance with the passage of time.

While this isn’t a particularly tough punishment it is important to have it on record, and the FEC provided such a record.

Even when she loses, Hillary’s cronies protect her. To call this fine a slap on the wrist is an insult to slapped wrists. It’s so trivial it’s more of a reward.

Corruption as far as the eye can see.

“Even when she loses…”

The only thing she has lost so far is her ruby slippers. A little girl named Dorthy was last seen wearing them according to latest reports.

“… They also argued that Fusion GPS’s work was protected under attorney-client privilege. …”

And that’s why they didn’t hire Fusion GPS directly. They imagined they could screen it. Knowledge of the misdeed, they knew damned well it was a problem and took steps to hide it. Another nail.

Durham will add this to his case. Another data point and list of who to interiew

113k won’t even result in a cut back in the yearly Christmas party budget. It is little wonder why the election campaigning process is so corrupt, not even a slap on the wrist and no admission of guilt.
That fine probably didn’t even pay the overhead to run the investigation.

Whatever. Doesn’t mean a thing. They didn’t find Hillary guilty of anything. They found the Clinton campaign and the DNC lied about payments and fined them “$8,000 and $105,000” for those lies. (Oh my, what a fine for a campaign that raised a $1 billion (that’s billion with a “b”) dollar operating fund. Paying $113K has gotta hurt.) And even then they aren’t taking responsibility and are just not contesting it any longer hoping that the issue will simply vanish before the 2022 midterm election. (And it will, I dare the liberal MSM to even mention this at anywhere.) But in the end Hillary Clinton once again slips through the cracks and gets away with breaking the law. Disgusting. Simply disgusting.

The FEC fine is another black eye for Hillary and the Democrats.

I guarantee you that the MSM (aka the propaganda arm of the democrat party) will never mention this at any time in their media shows and it will be quickly forgotten. Which is exactly why the Clinton campaign people aren’t contesting it any longer. It’s all just political house cleaning by the democrats as they become increasingly panicked and desperate to clean up their image in the run up to the Nov 2022 midterms.

And just wait. It’ll get even more insane in the democrat brain when they realize that nothing they do can improve their image. What next, are they going to blame the whole “defund the police” movement that democrats championed on Republicans? Oh wait, they’ve already tried to do that. And failed miserably to convince anyone.

So don’t expect any “black eyes”. In fact, don’t expect this to be mentioned anywhere in the MSM any time soon. It just ain’t gonna happen.

Paying a fine with stolen money isn’t really a punishment of any kind. The media will completely ignore this.

They got fined less than 10% of the million plus they laundered. A cost of business I’m certain they are budgeted for.

The only really “good” thing about this fine is that it can materially shore up Trump’s suit.

Not really. They can say, “Fine, so we weren’t specific enough when we reported this expenditure to the FEC. We should have said it was for “oppo research”. So what? How does that mean we defamed Trump? It was a mere clerical error, nothing more.

I mean, suppose the Russia hoax were actually true. Suppose every word of the Steele report were verified by 100 witnesses. The mislabeling would still be the exact same issue, and they would still have been hit with the exact same fine.

The left have attack dogs that go to the extreme to convince the world that every lie is true. We, on the other hand, have Milhouse (“trying is the first step to failure”) forever explaining to us why we can’t win so we shouldn’t even try. You must be a cheerleader for the Jacksonville Jaguars. Or maybe a motivation coach. “First and ten, let’s punt.”

I’m telling you the facts. The fact is that this outcome does not help Trump’s suit in any way. Even if the Russia hoax had been 100% true the fine would have been exactly the same, because they still put the wrong label on it.

It addresses your fundamental problem. You are stuck on a small island all by yourself and you seem to be the only one doesn’t realize it. The reason people don’t listen to you is because you are so convinced that only you are right, that you have it all figured out. You just aren’t listening. It’s okay to evolve, No man is an island AND nobody KNOWS anything. Structures that don’t bend eventually break. We are all trying to figure it out. That is why we have discussions. And it helps to have a sense of humor.