“By allowing men to compete in women’s sports, the NCAA is destroying opportunities for women, making a mockery of its championships, and perpetuating a fraud.” 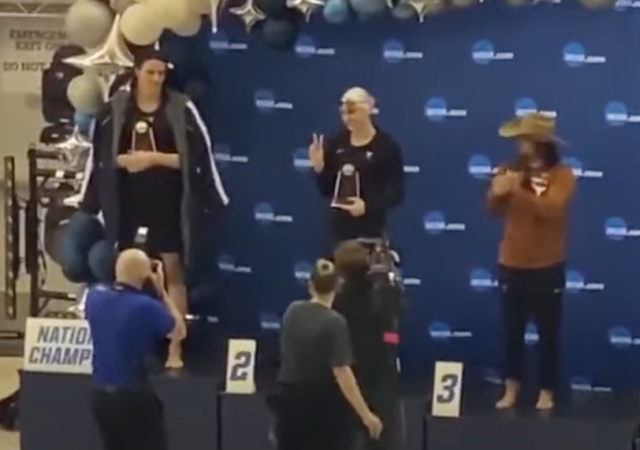 Florida Gov. Ron DeSantis declared Florida native Emma Weyant, a swimmer at the University of Virginia, the winner of the 500y freestyle over Lia Thomas in a proclamation.

DeSantis brings up his Fairness in Women’s Sports Act, which he signed in 2021, that bans transgender women from female sports in his proclamation.

By allowing men to compete in women's sports, the NCAA is destroying opportunities for women, making a mockery of its championships, and perpetuating a fraud.

In Florida, we reject these lies and recognize Sarasota's Emma Weyant as the best women's swimmer in the 500y freestyle. pic.twitter.com/tBmFxFE3q6

The governor also criticizes the NCAA for allowing Thomas to compete against biological females. Instead of taking a stance, the NCAA deferred “to the guidance of each sport’s governing body.” Its decision went into effect this month and started with the swimming championships.

The NCAA also decided not to adopt USA Swimming’s new testosterone policy. We do not know if Thomas is eligible:

The previously approved NCAA testosterone threshold is 10 nmol/L, and it is unknown whether Thomas is eligible based on that number. If she is, she will be able to compete at the NCAA Championships. The CSMAS (the Committee on Competitive Safeguards and Medical Aspects of Sports) reviewed the policy, along with the new USA Swimming policy (5 nmol/L) before making the decision.

“The subcommittee decided implementing additional changes at this time could have unfair and potentially detrimental impacts on schools and student-athletes intending to compete in 2022 NCAA women’s swimming championships,” the NCAA wrote in a press release.

Arm length and torso length are two things that men typically have more of that allow them to swim faster. Physical features such as those will not be changed by any amount of HRT.

Thomas also has bigger feet to kick with and using his longer arms as levers to pull through the water with, he has an unfair advantage over biological females.

Foot size is HUGELY important. If you look at mens’ record holders in swimming, the vast majority of them have unusually/disproportionately gigantic clown feet.

At least he is standing up for a Florida native, but understand this: other then headlines, this has zero meaning.

It’s meaning is that DeSantis is hoping to be the Republican Presidential Nominee in 2024.

Trump and desantis are both FL residents. The constitution requires P/VP be from different states.

It actually says “one of whom, at least, shall not be an inhabitant of the same state” as the elector. So the electors from Florida could only vote for one of them, but electors from other states would not be restricted.

Trump can easily move to an island

No, it doesn’t. What it does require is that if they’re both from the same state that state’s electors can only vote for one of them. Which doesn’t matter if it’s a tiny state with only three electors, and the election isn’t down to the wire. They can afford for those three electors not to vote for the running mate.

But Florida now has 30 electors. If Trump and DeSantis run together and their margin of victory is 15, i.e. they get 285 electors, all is well. 15 FL electors would vote for Trump and not DeSantis, while 15 would vote for DeSantis and not Trump, thereby giving them 270 each. But if they only get 284 electors, 16 of FL’s 30 would have to vote for Trump to get him to 270, and only 14 could vote for DeSantis, leaving him short of a majority and thus throwing the VP election to the senate.

So the only way it could work would be for Trump to move states again. He would have to establish residence in a new state before the electors vote. (Or DeSantis could move instead.)

It would make more senses for Trump to move to New York. He won’t lose any electors if he does that.

Bull Shit! This has plenty of meaning. Here in Florida DeSantis is taking the playbook from Trump and showing other Republicans to show their balls (pardon the pun). It puts DeSantis as the Republican pushing back unlike most elected Republicans. It rallies the base to fight the loony left. The more conservatives break away from this nonsense and say, “Fuck you!” to the left it shows that we as conservatives will not be controlled nor cower.

Sorry, I find it hilarious and meaningful at the same time.
I have no issues with shoving crap back in their face. It’s never done and it needs to be.

I meant to downvote big thumbs

I disagree.
So far, DeSantis is the first significant politician to take a public stance that 2+2=4, regardless of what the woke shitbats say it is.
Ask the ones who represent you why they’re not doing it.

It has plenty of meaning. It’s not legally binding on the CNAA, I’m sure, but it is not nothing when the governor of a populous and wealthy state says “in this state, you are the champion”.

I do wonder how that works over the medium term, though – can she call herself the NCAA champion as long as she’s in and dealing with Florida entities?

What shameless, cheating clown this oaf is. More shameless and clownish, are the other shameless (and mostly malignant) clowns promoting a 6’4″ man in a woman’s sport.

This is very, very sick.

More frightening is the nomination of that leftist freak Jackson to the Supreme Court. And telling: we’ll never be 50 states, and the breakup will happen sooner than you think.

Love the video
Oh the Irony

Glad someone is standing up for women’s, read that real women’s, rights

Trump and DeSantis: the platinum and gold standards.

“The USA now has the worst leadership of a major power in world history. American Democracy itself is going to take a major blow for its responsibility in transporting hungry sewer rats like Biden, Harris, Pelosi and even Obama himself up into the light of world dominance they couldn’t handle.”
https://donsurber.blogspot.com/2022/03/2022-year-globalism-stood-still.html

“Women should be barefoot and in second place.”

The one swimmer at the meet who would – on the record – criticize Thomas’ participation had her Twitter account permanently suspended yesterday.

I have yet to hear any GOP politician comment on it much less explain how they’ll remedy Big Tech censorship.

Merely another example of how the legal communtiy, using legal ‘logic’, tort by tort profitably screws everything up and terrorizes logical response. Everybody hustles to avoid the expense of a legal censure. So now you even have to be careful to get the honorifics (in place for 400 thousand years until now) ‘correct’. And since we’re wheeling out lawyers a dozen a minute and they all have to bring in 5 bucks a minute, things aren’t going to get better/

I believe if all the young women would unilaterally commit to protesting a man competing in women’s sports by refusing to race against him.
They would simply line up at the start of each race as usual but when the race starts REFUSE TO ENTER THE WATER and instead STAND UP TALL TURNING THEIR BACKS ON THE POOL leaving Thompson as the only one swimming. That would not only illustrate the disproportionate rules that allow a man to race in women’s sports but it would show the world that they refuse to be disrespected any longer. They would ALL have to commit to this entirely to make it work.

Even though I agree in sentiment and think this is wrong at just about every level- the bottom line truth is that this is the inevitable full circle conclusion of what many women( feminists and their lawyers) did to themselves. (Law of unintended consequences)

If people were not exhibiting this same level of disdain and disagreement 30+ years ago when little girls wanted to play boy’s sports even up to combat MOS ( with different standards) then a lot of this “outrage” now is very shallow and hollow.

That’s only the first part because those were “girls” as “girls” competing against boys. There was still a distinction with a difference.

The logical next step is a boy “pretending” to be a girl and trying to emulate being a girl competing on the same level as a girl only because of a “belief”.

The fact is that male to female transformation is a myth- it is medically impossible anymore that we can transform into a canine. All we can do is surgically implant silicone parts giving a superficial appearance followed by role play. ( very expensive and high tech game of “dress up”)

Sow into the wind and reap the whirlwind not unlike Frankenstein’s Monster.

That makes me smile!

Let Thomas compete against XX females after he loses body weight until he weighs no more than the heaviest female swimmer in a race.

What would this accomplish? He probably has next to zero body fat, so the difference is bone and muscle. He won’t lose bone mass, so it will be muscle mass that goes. Now let’s see how well he propels his body through water with that much less muscle.

Wrestling goes by weight. Why not swimming?