COVID Relief Program is the ‘Biggest Fraud in a Generation’

COVID Relief Program is the ‘Biggest Fraud in a Generation’

“What didn’t happen was even minimal checks to make sure that the money was getting to the right people at the right time.” 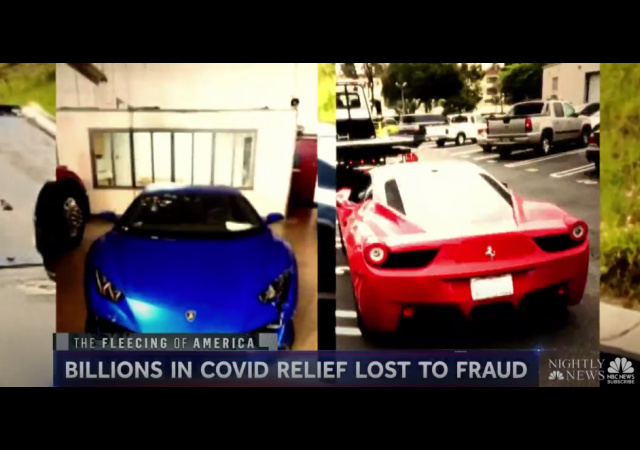 We’ve known about the fraud associated with the COVID relief program known as the Paycheck Protection Program (PPP):

Many who participated in what prosecutors are calling the largest fraud in U.S. history — the theft of hundreds of billions of dollars in taxpayer money intended to help those harmed by the coronavirus pandemic — couldn’t resist purchasing luxury automobiles. Also mansions, private jet flights and swanky vacations.

They came into their riches by participating in what experts say is the theft of as much as $80 billion — or about 10 percent — of the $800 billion handed out in a Covid relief plan known as the Paycheck Protection Program, or PPP. That’s on top of the $90 billion to $400 billion believed to have been stolen from the $900 billion Covid unemployment relief program — at least half taken by international fraudsters — as NBC News reported last year. And another $80 billion potentially pilfered from a separate Covid disaster relief program.

“The Small Business Administration, in sending that money out, basically said to people, ‘Apply and sign and tell us that you’re really entitled to the money,’” said Horowitz, the chair of the Pandemic Response Accountability Committee. “And, of course, for fraudsters, that’s an invitation. … What didn’t happen was even minimal checks to make sure that the money was getting to the right people at the right time.”

The criminal methodology varied depending on the program. The epic swindle of Covid unemployment relief has been carried out by individual criminals or organized crime groups using stolen identities to claim jobless benefits from state workforce agencies disbursing federal funds. Each identity could be worth up to $30,000 in benefits, Horowitz said.

The lenders did not do much to verify the information given to them by the borrowers. That allowed the borrowers to over-exaggerate “their numbers of employees or created companies out of whole cloth.”

Congress told the SBA that “lenders ‘will be held harmless for borrowers’ failure to comply with the program criteria.'”

Haywood Talcove, CEO of Lexis Nexis, which helps the government verify identities, said people could go “on state websites” and use “the names of existing businesses or registered new fake ones.”

Talcove said: “There’s absolutely no security on there. There’s no validation of any information. And voila, you have company ABC with 40 employees and a payroll of $10 million. And you go and apply for a PPP loan. It was a piece of cake.”

Then there’s Danielle Miller. Federal prosecutors claimed she stole from a Massachusetts state website and used the information to get relief money. Miller showed off her lifestyle on social media:

In 40 minutes, she had $100,000 in taxpayer money, court documents say. She soon booked a private jet from Florida to California, where she spent $5,500 at a luxury hotel in West Hollywood, court papers allege.

On her Instagram account, which has 34,000 followers, Miller posted photos from two posh hotel stays paid for with criminal proceeds, prosecutors say. Her bio: “I want that.”

“Miller’s criminal record includes arrests in five different states, many of which were related to larceny and identity-related fraud,” the complaint in the case says.

Miller pleaded not guilty, but court records now say she intends to plead guilty to an unspecified charge.

The significance of this theft will increase with the passage of time.

Looking far too late.
Won’t get much back
The small businesses that really needed it got minimum, so many businesses ruined.

I’m curious, what part of this do you believe is Trump’s fault and why?

Well, something bad happened, so of course it’s Trump’s fault. Just like if something good happens it is Biden’s credit. Get with the program.

That’s ridiculous, a program was set up with no or few checks and balances of billions of our hard earned money
This freaking government steals our money away and then gives it to everyone but the American citizens
And yes Trump was President then

Because the money give away started on his watch?
It appears no one was watching
For God sakes he’s a business man

True but Trump did not write this bill ( the house and senate did) nor was he charged with implementing and managing it.

Don’t get me wrong, I’m all for accountability and responsibility but Trump is but 1 man and he is not a “deity” nor does he have “supernatural instincts”. He also didn’t have “dictatorial” power and authority.

Many times Trump was deliberately lied to, misled and had critical information withheld to convolute many decisions also.

Not to mention, he was fighting the swamp along all 360 degrees of the compass and all geometric axes along the X.Y and Z.

And that’s not making any excuses for him or giving him any out whatsoever ( and understanding full well the doctrine of command responsibility) but many things were beyond his control.

Nor could Trump have shot it down given the national mood at the time unless he chose to commit political suicide and hand the election to Biden on a platter.

He was in a no win position on that one.

Free handouts for no reason comes along every year. They just call it by different names.

Of course, no one’s ever seen this behavior before.

Egregious as these cases may be, they pale in comparison to the rape and plunder that CONgress commits against the taxpayer on a regular basis.

No one cares. It’s not their money (the politicians), so they pull out as much credit as they can for “helping people” and — as always — they don’t really care if they REALLY help people or waste taxpayer money.

I have taken for granted most of Covid payouts was grift, that’s how every big government payout works. Small time operators charging for service they have no business doing to big contracts to supply everything that are way overpaid for.
“Green” programs work exactly the same way as does every government program these days.

COVID was the biggest fraud of all time. There will never be another fraud that will come close.

Oh, they will keep trying, you betcha…

Actually, Covid is a relative newcomer in terms of fraudulent programs.

No, COVID was a scam so vast it got other countries to participate in it. The programs you site above, whatever the outcome of them, weren’t started with the intention of being fraudulent. COVID, through and through, was. Trump should have stuck to his original instinct when he called it a hoax foisted on the country by the Democratic Party.

Every government “relief” program is peppered with fraud and the larger the program, the larger the fraud. The agencies are under enormous pressure to send out the funds, but Congress ALWAYS conveniently fails to fund the personnel needed to properly oversee the program and prosecute people who take advantage of the lax oversight.

I’m told if criminals weren’t poor and out of choices then there’d be no more crime.

So why are the crimes still happening and at higher rates than before if we’ve given away money to criminals??

Funny how lefties always want to make fun of trickle down economics but don’t see the log in their own eye regarding the social fraud economy they create with their craptastic ideas.

Yes, redistributive change is the flood of climate change past, present, and progressive with “benefits”.

At least the people committing the fraud had the decency to spend it frivolously so that it went back into the economy. Those exotic car dealers have to eat, too!

Taxpayers were ripped off big time and you can darn well bet politicians, their families, donors and friends got their share of those funds.

This is another classical example of a well meaning program that became a basis for huge rip offs because it had no rules whatsoever for ;potential beneficiaries