This isn’t engaging. This is propaganda. 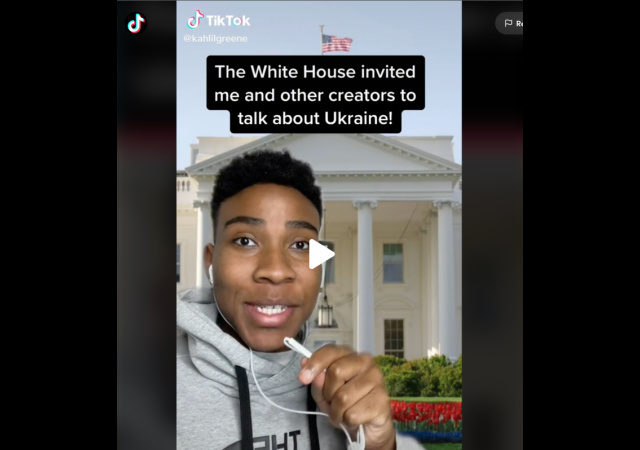 The White House met a bunch of TikTok “stars” on Zoom to tell them how they can sell the Biden administration’s message on the war in Ukraine.

It’s weird. I’ve been watching shows on dictators this week. The shows reminded me how the dictators used media platforms at the time to push their messages to the people.

The administration worked with the nonprofit group Gen Z For Change to determine which “stars” to invite to the Zoom call.

These “stars” received information from National Security Council staffers and Jen Psaki. These employees told the “stars” all “about the United States’ strategic goals in the region and answered questions on distributing aid to Ukrainians, working with NATO and how the United States would react to a Russian use of nuclear weapons.”

TikTok stars have more access to the Biden White House than the American people. https://t.co/8xCY0jxEqe

TikTok “star” Kahlil Greene said those “in my generation get all our information from TikTok.” He explained that the platform is “the first place we’re searching up new topics and learning about things.”

I cannot argue with Greene. Non-leftists have to engage in all platforms. Even though a lot of those targeted in these TikTok videos cannot vote they are still important.

But this is not engaging. This is flat-out propaganda (emphasis mine):

The briefing was led by Matt Miller, a special adviser for communications at the White House National Security Council, and Psaki. The Washington Post obtained a recording of the call, and in it, Biden officials stressed the power these creators had in communicating with their followers. “We recognize this is a critically important avenue in the way the American public is finding out about the latest,” said the White House director of digital strategy, Rob Flaherty, “so we wanted to make sure you had the latest information from an authoritative source.”

Jules Terpak, a Gen Z content creator who makes TikTok essays about digital culture, said the White House’s decision to engage creators such as she was essential in helping to stop the spread of misinformation. “Those who have an audience can ideally set the tone for how others decide to assess and amplify what they see online,” she said.

The “energy” given off during the “call felt like a press briefing for kindergartners,” Suzdaltsev concluded.

Telling these youngins what to say to their followers is not engagement. The officials aren’t answering those hard questions. They are simply using these young people to push out their message and version of events.

It’s disgusting. This is no better than dictators telling those with outreach what they can and cannot relay to their audience.

So as soon as the meeting ended the “stars” flooded TikTok with videos filled with Biden’s message:

Within hours of the briefing’s conclusion, the influencers began blasting out messaging to their millions of followers. A video posted by Marcus DiPaola, a news creator on TikTok, offered key takeaways from the meeting in a video that has been viewed more than 300,000 views. Greene also posted a recap, adding his own critical analysis at the end, calling out the Biden administration for not “acknowledging its role in other occupations and invasions around the world.”

Ellie Zeiler, an 18-year-old TikTok star with more than 10.5 million followers, said she hopes to remain in communication with the White House and continue to press officials there about key issues. She sees herself as a voice for young people and the growing contingent of news consumers getting information primarily through social media platforms.

“I’m here to relay the information in a more digestible manner to my followers,” she said. “I would consider myself a White House correspondent for Gen Z.”

Again, there’s a difference between engaging and propaganda. This is pure propaganda.

This is one of the TikTok stars that the White House invited on a zoom call to get briefed on Ukraine.

Her channel, which is just hundreds of videos of her dancing, is definitely the first place I would go to get Biden approved news on the war 🤡

The adults are back in charge. pic.twitter.com/yzxiPOsZ22

The Obama, Biden, Clinton, McCain, Biden Slavic Spring, another violent coup without borders in the Spring series from Tripoli to Cairo to Damascus to Kiev with “benefits” and a forward-looking cover-up. What difference, at this point, does it make, indeed.

“We have always been at war with Russia. With good reason. Only traitors say otherwise.”

Except when Russia was Communist. Then you were called a crazy right winger for daring to even question the Russian leaders.

When Reagan called them the Evil Empire, the NY Times and the rest of the media went crazy.

But now if you don’t attack Russia because Joe Biden says so, you are a traitor.!!

No more pretending anything other than this: we have left the cliff and are now flying high above the canyon.

You do know his names wasn’t Evel Kniwvel when he was born.

It was Corn Pop

Who the hell names their kid Evel Corn? 🤔

The nation is ours to lose.

Yeah that pretty young lady, I’m pretty sure that when they watch her videos, they can’t hear a word she says.

I wonder if Jackson Mahomes was included.

This seems to put the communications decency act and the social media are “private companies” who can ban who they want into perspective.

Come on, man! These tik tok guys couldn’t find Ukraine on a map (or even spell Ukraine) until the white house told them what to say.

It’s enough of a challenge dealing with all the misinfo coming out through regular channels like the MSM and then battling the constant ban hammers on FB and Twatter… now we have yet another front to fight in the info wars with the ankle biters on TikTok.

I can only pray that their propaganda is so over the top that enough normal people will wake up and smell the $#!+ sandwiches this administration is trying to cram down their throats. Regrettably, there will be a percentage (hopefully miniscule) that will never wake up. We just have to concentrate on those that are not too far gone.

If it’s close to what the msm hacks are reading straight off press releases and choreographed leaks then it’s more of the same propaganda. The message on TickTock will be a very dumbed down version. Putin bad. Russia bad. Ukraine = good guys. No nuance or balance allowed. Certainly no analysis of how we went from winning the cold war thirty years ago to creating a new one this year.

Agreed. The 18 year old “sage” Ellie Zieler stated: “I’m here to relay the information in a more digestible manner to my followers,” she said. “I would consider myself a White House correspondent for Gen Z.”

Well, as a biologist, I can tell you with great authority that predigested food comes out in two forms, vomit and feces.

Which one are you peddling, Ellie?

“TikTok “star” Kahlil Greene said those “in my generation get all our information from TikTok.”

The Chinese propaganda channel. Of course. Duh.
Well, the previous generation got all their information from Stephen Colbert and Jimmy Kimmel, so glass houses, I guess.

Given the number of TikTok videos I’ve been sent where some dancing chick suddenly gets naked like R-rated Bewitched, I’d say Biden went shopping for his whores in the right place.

Kids really do get close to 100% of their news from tiktok. They really do browse the “recommended for you” portion. It is scary and it melts their brains. Every single day I get asked if something thry saw on tiktok is real/true.

Entirely controlled by China, of all obvious scams.

Designed for people with 5 second attention spans – if that.

I know that when I’m looking for serious and sober discussion of important matters, the first place I look is Tiktok.

We live in serious times and are led by unserious people. The White House is ONLY concerned with optics… how they can sell their agenda. They don’t care whether it’s a good one.

The future looks bleak. I fear for my children and grand children.
.

What leftist academia left behind, that is.

Judging by the results so far, the Biden/Harris administration didn’t just brief Tik Tok “stars.” on the Ukraine/Russia conflict. They put them in charge of that area of our foreign policy.