John Kerry on UN Climate report: “We’re in trouble. I hope everyone understands that.” 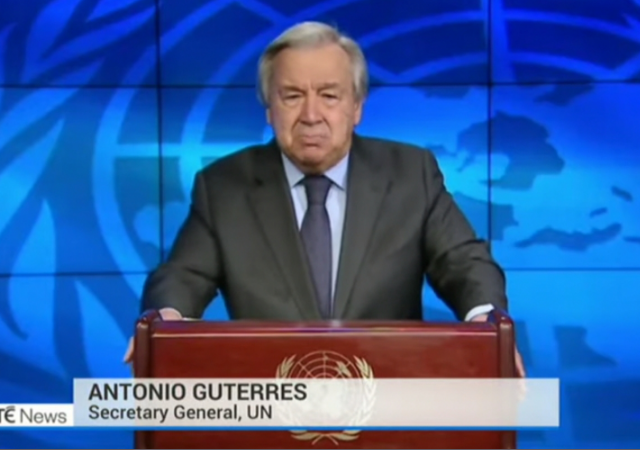 Activists fear that Russia’s invasion of Ukraine is “overshadowing” the latest Climate Change report released by the United Nations.

On Monday, the UN’s Intergovernmental Panel on Climate Change (IPCC) issued a much-publicized report that painted an apocalyptic picture of the future.

The UN “report spelling out why half of humanity is in danger isn’t drawing as much attention as it might while leaders are distracted by Russia’s invasion of Ukraine,” UK TV channel Sky News complained. Politico also noted that the latest UN Climate report “is unlikely to get the attention it warrants” given “the urgency and desperation of the war in Ukraine.”

The alarmist UN report claims that humanity is on the brink of a disaster if no one implements their radical recommendations on a global scale. “Any further delay in concerted global action will miss a brief and rapidly closing window to secure a liveable future,” the several thousand pages-long report warned. “Things are way worse than we thought,” and the “small window is closing fast,” the BBC said in its review of the report.

The IPCC report has the backing of President Joe Biden’s administration. “We’re in trouble. I hope everyone understands that” John Kerry, President Biden’s special envoy on climate change, said at a UN event coinciding with the release of the Climate report.

Reuters reported the growing worries that Russia’s invasion of Ukraine is casting a shadow on the UN’s climate agenda:

As scientists readied for Monday’s release of a sobering United Nations climate report, some worried it would be overshadowed by Russia’s invasion of Ukraine.

The report – described by U.N. Secretary-General António Guterres as “an atlas of suffering” – calls for concerted efforts by governments to prepare for a warmer world. (…)

The invasion rattled participants of the virtual IPCC proceedings on Sunday morning, as political delegates and scientists held a final session after two weeks of negotiating the report’s summary for policymakers. (…)

When the invasion began last week, the Ukrainian delegation told IPCC organizers that they might pull out of the final document review if the internet or electricity went down, Schmidt said. The Ukrainians “expressed how upset they are that this will distract from the importance of our report”.

Railing against the use of fossil fuels, Kerry lamented that the rest of the world isn’t following the policies championed by the Biden White House. “Most countries have the ability to deploy very significant additional amounts of renewables and they’re not choosing to do that,” he lamented.

The comments come days after Kerry begged Russian President Putin to support his globalist Climate goals. “I hope President Putin will help us to stay on track with respect to what we need to do for the climate,” Biden’s Climate czar said on Thursday.

As the invading Russian military hits Ukrainian cities with ballistic missiles and illegal cluster bombs, Kerry worries about the harmful Carbon emissions caused by the Russians in Ukraine. “But it could have a profound negative impact on the climate, obviously. You have a war and obviously you’re going to have massive emissions consequences to the war,” he said.

Putin, busy wiping Ukraine — a European country larger than France — off the map, didn’t respond to Kerry’s desperate plea. It is unclear if the Russian despot shares the U.S. Climate Czar’s worries about global warming impacting the freezing Siberian winter.

I sure hope so!

Beat me by 7 minutes.

When you’re as rich as Kerry and livng so far up on top of the hog you can’t how the rest of the people live, you have nothing better to do than sit around with your pipe in one hand and your wine glass in your hand and lament about not getting your way.

Kerry’s a useless fogey who posts stuff that begins, “I’m so old, I remember when…”

You behave, you young whippersnapper! /gesturing with my Walgreens cane

I’m so old I remember when John Kerry wrecked his bicycle in France and broke his leg. He had to scrap the rest of his trip including a conference on global warming. He’s been an armchair global warmist ever since.

How do you breathe with your head that far up there?

In high school chemistry, we did experiments that everyone could duplicate its results.

It seems as though they have an answer and are only looking for a problem so they can get you to accept their answer.

John Kerry: “We’re in trouble. I hope everyone knows that.”
…recently returned from jetting around the world in the most inefficient travel form on the planet (private flights) to one of his many McMansions

Thanks for the lesson and shining example, dick head!

Some other Kerry goodies

-Near zero US emissions will do little to curb climate change, if anything

He is Al Frankengore and the problem is that both of these scammers are listened to by a pile of cultists that won’t care when he admits the quiet part out loud.

Oh, we’re in trouble…but not for the reasons he thinks!

The “small window is closing fast” sounds an awful lot like “unprecedented opportunity to build back better” – and both have the same ultimate objective in mind.

“Covid” has pretty much lost its effectiveness in scaring the populace (a few Karens here and there notwithstanding), so cue the “OMG we’re all gonna die in 10 years if we don’t do something about ‘climate change'” chorus. Gotta scare people so they’ll accept owning nothing and being “happy.”

I would like to slam the window shut and put in a few nails so they can never open it again.

With Kerry’s and Gore’s fingers jammed in the sash?

Unlike anything since the 1930s, and these fraudsters keep running the hustle like it’s normalcy.

Activists fear that Russia’s invasion of Ukraine is “overshadowing” the latest Climate Change report released by the United Nations.

Oh noes! That dastardly Mr Putin. I wonder if he did this on purpose. Probably Trump asked him to do it, to distract attention.

The UN “report spelling out why half of humanity is in danger isn’t drawing as much attention as it might while leaders are distracted by Russia’s invasion of Ukraine,”

Wait. I’m not getting something. If the report is really that important then surely it should be overshadowing the war, not the other way around. Why isn’t the whole world focused on the report, and ignoring the Ukraine?

Surely that’s what Putin thought would happen. He thought he was clever, timing his invasion to occur just as everyone was busy reading the IPCC report and by the time they were done with that the Ukraine would already be digested and he’d wipe his mouth and say “Ukraine? Oh, that Ukraine! I saw it just a moment ago, I swear it was somewhere around here; can’t think where it’s got to now.” But he didn’t anticipate that the world would be so stupid as to focus on the Ukraine and ignore the real disaster.

Yeah, that must be it.

Railing against the use of fossil fuels, Kerry lamented that the rest of the world isn’t following the policies championed by the Biden White House.

Imagine that. I know, it must be Trump’s fault. Trump brought the USA into disrepute, and they don’t even realize we’ve got a new president who has restored the USA’s dignity and reputation… er … wait, no, that doesn’t work …

Made me smile. Good sense of humor Milhouse.

It should. Unlike this climate change junk science nonsense, wars are actually real.

And this, ladies and gentlemen, is why newspapers have comics sections.

“the “small window is closing fast,” the BBC said in its review of the report.”

As long as Gore, Kerry, and all their asshole colleagues are on the far side when it happens. I’ll bring the nails.

So on one side we have the potential for a nuclear exchange with hundreds of bombs and millions of casualties this year. And on the other side we have the faint possibility of maybe reducing the naturally rising global temperature by a fraction of a degree a century from now.

Guess which one they’re most worried about.

Climate criminals could be summarily hanged and processed in one of Putin’s portable cremation units… along some used tires and old motor oil and maybe even a couple of Maxine Waters wighats.

Planned? Unplanned? Net-zero anomaly is well within the range of Her Choice… uh, choice.

In any kind of sane world, the “United Nations” priority would be to advocate for peace, not like Russians invading neighboring countries. But NOOO, let’s spend way too much money trying something that everyone knows won’t work.

abrams could easily “overshadow” the report–in any case, they’re both comprised of the same material

I remember how 9/11 totally overshadowed Durbin report. What a pity! it took anti-Semites over a decade to regroup and spew their venom with the same strength as they did in 2001…
I have confidence climate experts will find their way to the world stage as well.

I fear that some people will still notice the UN’s climate report and continue trying to institute communism as the solution.

And in furtherance of their certifiably insane, albeit more sinister plot, in Climate Change policy, they cut off all US energy production, all the while PAYING other countries to import their energy, ( including from Russia to this day), cuz they claim if we don’t produce it, imports “don’t count” in our resolve to implement renewables that either don’t work or more to the point, don’t exist!!
If I were a psychiatrist and some patient was espousing this theory (not to mention actually implementing it), I would consider them a grave danger to society.

“Hey UN!
Someone please just SHUT THE Damn WINDOW! You’re letting all the Air conditioning out!”

Somebody please ask the Chinese and the Indians their plans about building coal fired power plants as fast as possible. Brace for the answer.
.

“I can’t be tricky all the time .. I’ve got other things to think about” — Boris Badenov

Germany signalled a U-turn in key energy policies on Sunday, floating the possibility of extending the life-spans of coal and even nuclear plants to cut dependency on Russian gas, part of a broad political rethink following Moscow’s invasion of Ukraine.
..
In a landmark speech on Sunday, Chancellor Olaf Scholz spelled out a more radical path to ensure Germany will be able to meet rising energy supply and diversify away from Russian gas, which accounts for half of Germany’s energy needs.
..
“We must change course to overcome our dependence on imports from individual energy suppliers,” he said.
..
Germany is also weighing whether to extend the life-span of its remaining nuclear power plants as a way to secure the country’s energy supply, the country’s economy minister Robert Habeck, a member of the Greens, said.

Funny how US President Joe Biden didn’t mention any these ideas in his State Of The Union speech last night.

What the activists fear is that people will start thinking about real problems and start ignoring their made-up ones.