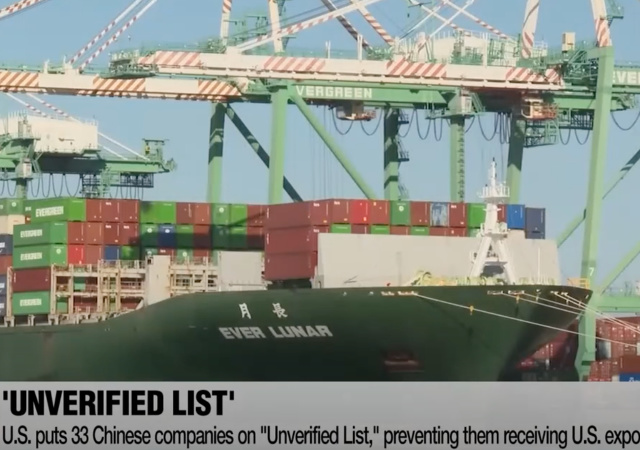 The U.S. Commerce Department has “red-flagged” 33 Chinese hi-tech companies amid growing concerns about the technology theft by Beijing-controlled entities. Adding these companies to the “unverified list” will restrict their ability to access products and technology developed by U.S. private sector players.

The announcement angered the Chinese regime. The county’s Communist Party (CCP) mouthpiece Global Times telling the U.S. to “correct mistake” and “return to the right path of win-win cooperation,” — a much repeated mantra as China’s state-owned companies continue to steal U.S. trade and technology secrets.

The Biden administration is raising red flags about 33 Chinese companies whose legitimacy it cannot verify, imposing new restrictions on their ability to receive shipments from U.S. exporters and requiring extra diligence from American companies that want to do business with them.

The Commerce Department said Monday that it was adding the companies to what is known as the “Unverified List,” a roster of businesses worldwide that are subjected to stricter export control because U.S. officials have been unable to do customary checks.

“The ability to verify the legitimacy and reliability of foreign parties receiving U.S. exports through the timely completion of end-use checks is a core principle of our export control system,” Matthew Axelrod, the department’s assistant secretary for export enforcement, said in a statement.

He added that the addition of 33 parties in the People’s Republic of China to the Unverified List “will assist U.S. exporters in conducting due diligence and assessing transaction risk, and signal to the PRC government the importance of their cooperation in scheduling end-use checks.”

Reuters reported the charges brought against the Chinese telecom giant:

The indictment said Hytera recruited Motorola employees from 2007 through 2020, and that these workers received higher salaries and benefits than what they received at Motorola in exchange for stealing the trade secrets.

Many such shady Chinese companies are not merely stealing commercial secrets to undermine their U.S. competitors. They are instruments of espionage in the Chinese government and the military.

In February 2021, the CCP-run parliament unveiled an economic plan to surpass the U.S. in 15 years. “By the end of that road map, in 2035, China sees itself replacing the U.S. as the world’s largest economy,” the Japanese business daily Nikkei noted.

The Chinese regime wants to build its military power to complement its economic rise. Beijing plans to transform the PLA into a ‘fully modern army’ by 2027. Xi Jinping’s regime is pursuing the Military-Civil Fusion (MCF) policy, which gives the country’s People’s Liberation Army (PLA) sweeping powers to use Chinese investments, companies, and research institutions to get its hands on cutting-edge technology being developed in the United States.

The Communist regime has ambitious plans as it dreams of dominating the world militarily. A 2021 report published by the DC-based National Bureau of Asian Research found that the Military-Civil Fusion (MCF) strategy aims to make the “People’s Liberation Army into a ‘world-class military’ and leading the world in emerging and disruptive technologies by 2049 as core national goals for China.”

I think the expression “locking the barn door after the horses have bolted” applies here.

Gee — the stocks of those companies must have under-performed the rest of Pelosi’s portfolio.

Maybe the companies didn’t offer better preferred options to her.

They didn’t steal any secrets. They bribed Americans to steal for them. Speaking of bribery, it is unpatriotic for congress to take all those foreign bribes instead of domestic ones. It is downright treasonous.

Tell that to all the Chinese nationals that are currently in the “1000 Talents Program” and are actively stealing U.S. technology & innovations and sending it right back to the CCP for exploitation.

Time to simply revoke all Chinese nationals work/education visas or whatever they are one a ship the whole lot of ’em back to Xi Jinping and the CCP with a message that this shit will no longer be tolerated in the United States.

But of course, that will never happen as neither the democrats or Republicans have the backbone or the balls to tell their Chinese masters to eff off and actually do what’s right for the United States.

You know, it’s a great business model — don’t develop anything, just steal it from another country who developed it, make cosmetic improvements, and sell it back to the world.

I understand they’ve even started doing that with female athletes.

Run, run, Joe!
Xi is rolling up a newspaper!

Ha ha. Hillary can run faster than him—with a hangover.

As long as there’s no stairs involved.

Is it possible that this is a misunderstanding? Are we sure those red flags are not China’s national flag?

Could this be the first act China Joe has done against China? Is it really something?

Efforts/investigations begun back in 2000 by Commerce so I wouldn’t credit Slow Creepy Joe. The real operators in the WH likely wanted it stifled but it wouldn’t look this year to be exposed protecting Xi.