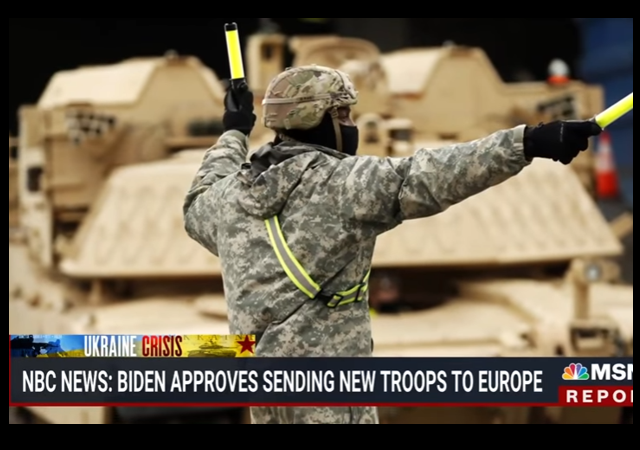 As of now, over 3000 Unites States troops are on their way over to Eastern Europe amid a standoff with Russia over Ukraine.

The deployments to Poland and Romania are above and beyond the 8,500 U.S. troops the Pentagon put on alert last month to be ready to deploy to Europe if needed.

Together, the moves aim to reassure jittery NATO allies in the face of a major Russian military buildup near Ukraine while avoiding new U.S. deployments to Ukraine itself, which is not part of NATO but does receive weapons and training from the United States and its allies.

At the same time, the US Army will begin discharging soldiers who refuse to get a vaccine for a disease that among fit, healthy, and young people is on par with a bad cold.

The Army said Wednesday it will immediately begin discharging soldiers who have refused to get the mandatory COVID-19 vaccine, putting more than 3,300 service members at risk of being thrown out soon.

The Army’s announcement makes it the final military service to lay out its discharge policy for vaccine refusers. The Marine Corps, Air Force and Navy have already discharged active-duty troops or entry-level personnel at boot camps for refusing the shots. So far, the Army has not discharged any.

According to data released by the Army last week, more than 3,300 soldiers have refused to get the vaccine. The Army has said that more than 3,000 soldiers have been issued official written reprimands, which suggests they are already identified in the disciplinary process, and some of them could be among the first to be discharged.

With this decision, the Army is the last branch to enact discharge action against members who refused the vaccine.

The Marine Corps, Air Force and Navy have already discharged active-duty troops or entry-level personnel at boot camps for refusing the shots. So far, the Army hasn’t discharged any.

According to data released by the Army last week, 3,350 soldiers have refused to get the vaccine. Another 3,600 have requested medical or religious exemptions.

Roughly 97 percent of all Army soldiers have gotten at least one shot.

Last week, the Navy announced it had fired 45 sailors for refusing the vaccine. The Marine Corps has discharged 334, the US Naval Institute reported last month.

The Air Force said last month that it had fired 27 service members.

Based on the trajectory, the Biden administration is setting up for another historic failure. God help the men and women of our armed forces.

“Your populate support is catastrophically low, what do you do?”

“I use my years of experience to find a distraction!”

“You start a war with Russia, in the winter.”

“Wait, don’t I get a saving throw? Let’s try diplomacy.”

“Sure” Rolls another crit fail. “The country says they aren’t being invaded so why are you there?”

“Ack! I’ll use our peerless military!”

DM rolls another crit fail: “Before mobilzations start you fire a bunch of them for stupid reasons. Moral plummets. Do you want to surrender? That has a default succeed option.”

Another nail in the coffin of what was formerly the most formidable military in the world. Which is becoming a corpse of its former self. Due to self-destructive self-inflicted policies.

Ironically, this current policy may reduce the relative proportion of blacks in the Army. Given that blacks are statistically the most likely to reject the not-really-a-vaccine ‘vaccine’.

Also, if a long and short term effect of the not-really-a-vaccine ‘vaccine’ is a degraded and compromised immune system the overall effect on the Army will be reduced readiness.

Combine this with widespread diversity and equity promotions, a huge reduction in legacy recruitment, and the ongoing loss of experience due to DIE indoctrination and implementation driven attrition and…

We will to lose the next major war we try to fight.

Germany lost the fighting but off loaded bad ideologies on the West, namely Marxism and post modernism thanks to certain luminaries of the Frankfurt School.. Critical Theory is a breached birth product of these ideologies.

I more had in mind the drain Germany has been on us since. All of Western Europe for that matter.

NATO won.
we lost.
I spent few years over in germany in mid to late 1980’s seeing how germany let US handle its defense.
nothing has changed.

Thousands of soldiers to defend Ukraine, none for our own border. All the illegals can be unvaccinated, as we kick out aforementioned soldiers from the military for the same thing.

I swear to dear God in heaven…..

Biden is search for 8000 American soldiers that don’t have myocarditis to send to Ukraine.

Well, you can’t get a discharge by wearing a dress and high heels anymore..

Those who try, but fail, are bitter Klingers.

The mask, so to speak, is off. These are non-sterilizing “vaccine(s)” with diverse (number, not color) excess adverse events reported and a novel lack of long-term safety data. Their argument is undermined by marginal personal protection and deficient public good with progressive transmission in staged states of “immunity”.

Those removed will eventually be the core of a revitalized military IF… IF….IF we last long enough. For those that pushed the Dem/CCP narrative… gooney runs forever.

I like to think rather that those removed will eventually be the core of a vital resistance force.

perhaps those discharged should consider a career in law enforcement

Normally I’m good at detecting sarcasm. But why go from one potential career where the ungrateful bastards you work for will discharge you for stupid reasons to another where they’ll prosecute you for doing your job to satisfy a bloodthirsty mob?

It’s Really Rather Simple
There is a clear elevation of all-cause mortality in the 25-44 age bracket coinciding with Covid-19 showing up. There is also an elevation in the other age brackets, by the way.

Planned parent/hood aside, this is a progressive condition with or because of transmission of Covax-20, 21, and 22 in the general population. The British data, Denmark, too, matches for the vaccinated cohorts that do not otherwise have a viable risk from or with the virus(es).

Frankly they should offer the option of immediate honorable discharge to all to let them escape lunatic leadership. When we get sane leadership let them re-enlist at heir last held rank. Many things are not worth dying for. It is much more than a job. No job requires organized mortal combat with suicide missions.