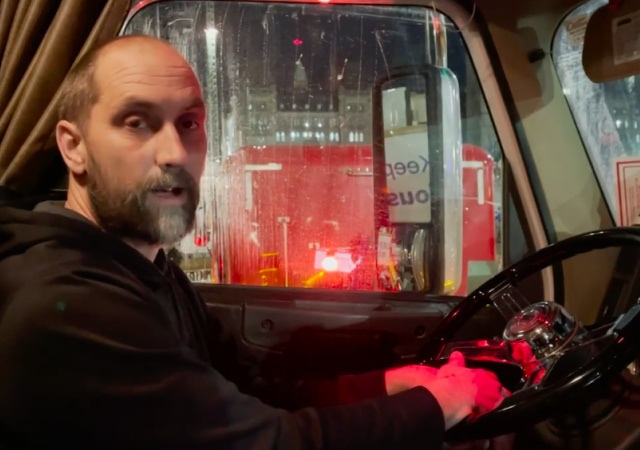 Canadian Prime Minister Justin Trudeau did not make a dent in the Freedom Convoy when he invoked the Emergencies Act, which gives his government the power to deal with those silly terrorist truckers!

You know I’m kidding but it’s disgusting when the government basically treats them as terrorists.

The truckers seemed to laugh off Trudeau’s power grab when they spoke to Fox News. Trucker Jan Goen said they just want to talk to Trudeau about all the COVID mandates.

Csaba Vizi described Trudeau’s move as “wonderful” since it will likely lead to more people joining the protest: “I’ll tell you why: because even more Canadians who have been looking at the whole thing passively from their home, their couch … they might want to wake up and stand up with us.”

Vizi continued: “We are here in large numbers, I’m pretty sure there are going to be some chicken drivers between all of us. But I can tell you for sure, one leaves, 10 others are going to take his place.”

Derek Brouwer thinks Trudeau’s action “makes him look incompetent to do his job.”

Eric Mueller quit his job after his company received a lot of complaints and threats. He also “suspended his contract, registration and insurance.”

Other truckers reminded Trudeau that they are tough people:

The government “doesn’t know blue-collar,” [Jan] Groen said. “We are a very conditioned group of people. We get flipped off on the highway … stuck waiting for hours on end.”

Another trucker, Tyler, who has been rotating in and out of the convoy with a group of truckers, similarly said: “We’re not going anywhere, we’re here until we’re done.”

“I can’t afford to get my truck” and “all my accounts and stuff seized,” trucker Tim Norton, who had been parked in Ottawa since the convoy began, told Fox News.

“I got too much money tied up that I can’t take a chance of losing it all,” the trucker explained. “Some of these guys can, but I can’t.”

A trucker with the Freedom Convoy gives his thoughts on Trudeau invoking the Emergencies Act:

"I'm going to stay here until this is over with. They're going to have to haul me out of here in handcuffs."

A demonstrator in Ottawa:"We're here forever and the cops know we're peaceful. They know there's no crime where truckers are." pic.twitter.com/BpMM5UrKc1

Truckers should go home. And than stay home. No deliveries anywhere in the country.

They can nick you for blocking a street but they can’t go after you for staying home. After all you’ve got to quarantine for a couple weeks. 😉

Gotta flatten that curve, or something

no trucks/truckers NO FOOD OR CLOTHING

Yeah, but why do it prematurely? Plenty of time later to stay home, if that’s what it takes.

Doesn’t matter now. I’m sure the fascists have a list of everyone involved in the protests. So now, whether or not they want it, they’re in it until the end. They can fall together or they can fall separately, but the fascists will get to them one way or another. The only option available now is to finish off the fascists.

There will be a resistance. The question is in what form. If the seizures of assets, cancellations of insurances and licenses, etc. of the truckers and apparently of those who supported them go through; those people will have nothing to lose.

Castreau crossed a line that cannot be uncrossed. If a government can strip an entire country of all their rights and assets at will, then they dare not ever give up power peacefully for fear of the same thing happening to them. The “Emergencies Act” he invoked was renamed. It originally was called “The War Measures Act”. Canada is under martial law. Coming out of a martial law regime is rarely possible without violence.

Not yet, another 30 days… see my comment below. The politicians are fed up with Trudeau and stepping up.

What will the wannabe dictator do if more and more cops start doing the same? Or refuse to execute his orders. Or start slow walking everything he commands them to do.

In the absence of support from his own LEO’s will the banks and financial institutions obey his orders to freeze accounts, suspend insurance coverage, etc? Will they wonder how such actions might affect their relationship with their other customers? Now, or in the future.

A dictator has no power if those he commands refuse to obey. And when he shows weakness his enemies will move in for the kill. Figuratively, of course. Or not.

This will be over very, very soon.

Trudeau is going to find himself hauled out of his office if he doesn’t change soon.

The knives are coming out.

Here is Jordan Peterson video where a senior trucker reads their statement of demands. “End the Passports. End the Mandates.” It’s that simple.

no trucks/truckers NO FOOD OR CLOTHING

“Trudeau’s action “makes him look incompetent to do his job.””

Are people only just now figuring this out?

Trudeau, like Beto here in Texas, has never had a real job I would guess. Trudeau would not last an hour as a trucker.

Before entering politics he was a part-time drama teacher and snowboard instructor.

As much as I dislike him the members of his party who chose such an unqualified leader because he had a famous last name are the one who are really to blame for all the problems we’ve suffered through the last six years.

I’m looking at that top picture. He looks determined.

Trudeau is expendable. He will be blamed and then replaced with a new puppet unless there are fundamental changes in the government and in the behavior — thinking and voting — of the citizens.

I seem to remember some doubt about whether Trudeau was reelected to Parliament from his riding last time. But I guess he was too important for a little thing like that to matter.

The system has layer upon layer of inertia. This will be a tough struggle and they try to smother any reform.

The Village Idiot received more than twice as many votes as the send place finisher.

I had the opposite impression last night. He seemed a world-class dictator. All the party-boy youth stuff is gone. This is Fidel Castro’s son, with the lessons from his father on how to do it better.

In comparison the others on stage seemed more ordinary. But Trudeau was a demonic nightmare.

Why did he get snubbed at confabs of world leaders? The likes of Xi Jinping might be afraid of that level of evil. They know it better than we do, being on the spectrum of evil themselves.

“Trudeau is expendable”, sounds like Biden and his team of crooks.

The truckers seem to gave been a couple of steps ahead of Justin Castro from the beginning.

If they’ve planned well ahead they anticipated the overgrown boy might try to use them to make himself dictator of Canada.

If so, many may have most of their personal assets, to the extent they have any, dispersed and hidden outside of Canada.

Independent Canadian truckers are a tough breed. The boy dictator will have his hands full trying to force them to bend the knee. As Canadian citizens watch on and try to guess if they might be next. And decide maybe that’s not the kind of Canada they want to live in.

This weekend, my cherished wife and I had the honor of hosting a full-blooded native-American in our home. We listened to his life story. It was amazing and humbling. When we parted, I told him that ALL of my good deeds in this long life seemed minutely small compared to his stories. I had thought that my life story had sufficient glory and sacrifice to be at least above average, but this family man’s good deeds made mine, at best, unworthy.

It is clear that these truckers have put themselves above the crowd. I was born in western Canada, and know their struggle and sacrifice is sincere. It’s solid and strikes a needed blow for freedom. My heart is with them. My entire family has been prepared for a nation-wide trucker’s strike here in America for many months. Perhaps it’s time to demonstrate to the lefty, anti-Americans precisely how fragile their existence is. They require our very existence to keep them alive. And yet, they believe we will allow the “Long Train of Abuses” (hat tip to the Declaration of Independence) to be accepted ad-infinitum by a freedom-loving populace. FJB and MAGA!

Prime Minister Trudeau pledges that the Emergency Powers will only be temporary and not abused:

He just needs two weeks to flatten the curve.

And I bet he is selling resort property in Florida’s great swamp.. I would love to see Trudeau hanging upside down from a street light, say for a few weeks, and people bringing rotten fruit for his eduction.

And of course the filthy bastard has never lied to Canadians before , Oh, wait, maybe he has, repeatedly.

If Trudeau actually gains the power to freeze truckers’ bank accounts, he can freeze ANY Canadian’s account. They all need to step forward now and boot Trudeau out of office while they still have a chance.

The truckers aren’t the reason for this move, they’re the pretext. It’s what Trudeau wants to do to the whole country anyway.

Seems about right! Truedingaling is dreaming if he thinks this will break them.

Thinking of the government and the truckers, there seems to be a terrorist entity in there somewhere.

It’s not the truckers.

Troo-doos last real job before going into politics was: a part-time ski instructor? Sounds about right.
He is incredibly light weight and it’s only the good manners of the Canuks that keep him in power. When push comes to shove, and Trudy seems determined to go there, he will be tossed aside. I suspect a judge will strike this effort aside and might save his future, but if he pushes forward Canadians will strike him down ultimately.