Sun Has Been Erupting with Energy, Plasma, and Ionized Gas Flares All Month

Sun Has Been Erupting with Energy, Plasma, and Ionized Gas Flares All Month 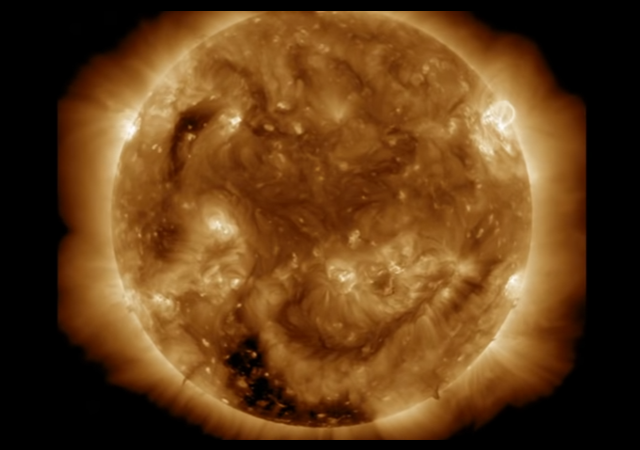 The news has been weird and wild this year, and there doesn’t appear to be any end to the strange.

The crazy even extends beyond planet Earth. The Sun has had an intense month of activity, emitting powerful energy bursts.

On Tuesday, our star fired off two enormous explosions from its farside in what has already been a heavy month of solar activity.

A magnificent coronal mass ejection (CME) was recorded by Nasa’s STEREO-A spacecraft in the early hours of February 15.

CMEs are giant eruptions that send plasma hurtling through space – and the Sun has undergone several of them throughout the month.

If they hit Earth, the plumes of material can trigger geomagnetic storms that knock out satellites and disrupt power grids.

Fortunately, this week’s CME was fired from the side of the Sun that faces away from our planet and so poses no threat, says astronomer Dr Tony Phillips.

Writing on his website spaceweather.com, which tracks the sun’s activity, he said: “This CME will not hit Earth; it is moving away from, not toward our planet.

“However, if such a CME did strike, it could produce a very strong geomagnetic storm. We may have dodged a bullet.”

Coronal mass ejections or CMEs are massive clouds of particles that are pushed out into space from the Sun’s atmosphere. These differ from solar flares, which are giant bursts of X-rays and energy that travel at the speed of light across all directions in the solar system.

It turns out the Sun has also been emitting those quite frequently this month, too.

According to SpaceWeatherLive, which tracks solar activity, the Sun has erupted every day for the month of February, with some days featuring multiple flares. That includes three of the second-most powerful flare category, M-class flares: an M1.4 on February 12; an M1 on February 14; and an M1.3 on February 15. There were also five M-class flares in January.

The mild geomagnetic storm that knocked 40 newly launched Starlink satellites from low-Earth orbit followed an M-class flare that took place on January 29. Ejecta from a solar eruption usually take a few days to reach Earth, depending how fast the material is traveling. The remaining flares that have taken place in February have so far been in the milder C-class category.

Finally, the Sun can also emit solar prominences. Prominences are bright, relatively dense, and relatively cool arched clouds of ionized gas in the chromosphere and corona of the Sun.

The Solar Orbiter, a Sun-observing satellite developed by the European Space Agency, has just captured the first image of a huge solar prominence.

It’s the largest such event ever observed in a single image along with the full solar disk and will add to the joint NASA-European mission to better understand solar activity, mission officials said in a statement.

…The event captured on Tuesday (Feb. 15) saw a prominence jetting out millions of miles out into space, with the coronal mass ejection not directed towards our planet, ESA noted. It was imaged by the Extreme Ultraviolet Imager on Solar Orbiter.

“Other space telescopes such as the ESA/NASA SOHO [Solar and Heliospheric Observatory] satellite frequently see solar activity like this, but either closer to the sun, or further out by means of an occulter, which blocks out the glare of the sun’s disk to enable detailed imagery of the corona itself,” ESA said.

“Thus, the prominence observed by Solar Orbiter is the largest ever event of its kind to be captured in a single field of view together with the solar disk, opening up new possibilities to see how events like these connect to the solar disk for the first time. At the same time, SOHO can provide complementary views to even larger distances,” ESA added.

The National Aeronautics and Space Administration (NASA) recently elected two science missions [the Multi-slit Solar Explorer (MUSE) and HelioSwarm] to help improve our understanding of the dynamics of the Sun. They are set to launch by 2026 . . . perhaps not a moment too soon!

That said, worry about the fascists in our nation and at our border: they’ll do a lot more damage to you than the sun will.

Actually, if one of these events is powerful enough and is headed our way, it can fry the electrical grid and electronic devices facing the sun at the time, a tremendous EM burst essentially.
This happened once in known history in the 1870’s or so when telegraph was wiped out for a period.
It doesn’t happen often enough to necessarily happen in our lifetime, some have said the nation should be hardening the electrical grid for these as well as EM bomb bursts, but afaik the govt.s have spent money on high speed trains and such,
If I am misinformed, please let me know.
They said, I agree there are many things that will be terrible that will happen first.

The Carrington Event of 1859 https://en.wikipedia.org/wiki/Carrington_Event

One in 1921 was almost as strong https://en.wikipedia.org/wiki/May_1921_geomagnetic_storm

We just passed out of a solar minimus period. We are now entering a solar Maximus period. Been happening for ever. Remember the last ice age was triggered by an extended minimus. And the North Pole was a sub tropic due to an extended Maximus.

I’d like to see a graph showing the sun activities (flares or CME’s) that are in our direction vs any changes in temperatures! I would bet that explains how we can have these unseasonably warm days followed by returning to seasonal temps. But then again it might just all be due to cow farts!

If we have another one before the Midterms, that will give the Biden crew a pretext for a suspension of Habeas and imposition of Martial Law. Biden needs an emergency because he knows his party will get creamed in the Midterms. Under martial Law, he can lock up his opponents and use federal troops to manage local elections the way it was done during Reconstruction, to ensure Democrats win.

The science missions set to launch by 2026 are way too late. Didn’t AOC say that we are doomed if we do not take dramatic action by 2030?

The only doom we face is if we don’t get rid of the likes of AOC from high office a lot sooner than 2030.

In line with existing clearly established Climate Change standards of proof I think we can safely attribute this extra solar activity to have been the direct result of human-caused excess carbon dioxide in Earth’s atmosphere.

I demand that the sun be made carbon neutral immediately. Who’s with me?

The Climate Cultists recently admitted that their models do not accurately predict the cooling effect of clouds.

I wonder if they’re accurately accounting for Sun activity?

Another name for a “predictive model” is “educated guess”

And the Earth’s climate is about to change…

Wait, it’s Winter and Spring is just around the corner, of course the climate is about to change.

“The eruptions happened on the dark side of the sun, but coronal mass erections spewing blood plasma into the atmosphere is causing global climate warming change. We now have 5 years and the world will explode into a Brazillion pieces.”

Cortez then said that a Brazillion is a lot of people from that country.

So *that’s* why I’ve been so cranky this month.

“The crazy even extends beyond planet Earth.”

Then “crazy” is the norm, since this and all solar activity is normal.

White Nationalism is obviously the culprit!

Sounds kind of like me when I eat cabbage. Lot of eruptions sending ionized.. or some kind gas out.