“And I want to make one point very clear – I do not believe that silencing Joe is the answer.” 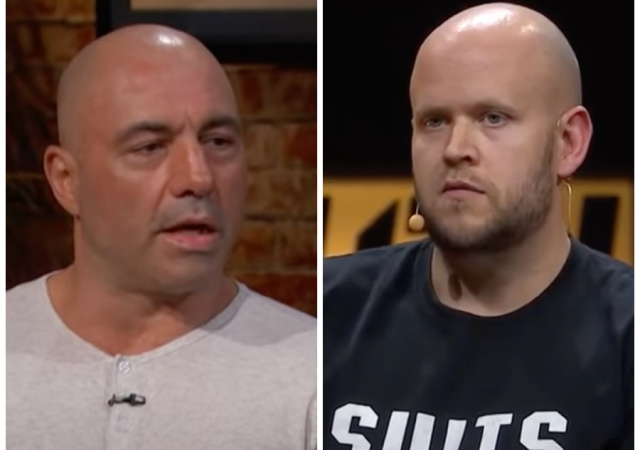 The rabid mob couldn’t cancel Joe Rogan over his COVID comments. They turned their attention to some old podcasts with him saying the n-word.

Spotify CEO Daniel Ek apologized for how the controversy hurt his employees. However, he once ago showed support for the world’s most popular podcast:

“I think it’s important you’re aware that we’ve had conversations with Joe and his team about some of the content in his show, including his history of using some racially insensitive language. Following these discussions and his own reflections, he chose to remove a number of episodes from Spotify. He also issued his own apology over the weekend.

“While I strongly condemn what Joe has said and I agree with his decision to remove past episodes from our platform, I realize some will want more. And I want to make one point very clear – I do not believe that silencing Joe is the answer. We should have clear lines around content and take action when they are crossed, but canceling voices is a slippery slope. Looking at the issue more broadly, it’s critical thinking and open debate that powers real and necessary progress.

It turns out Rogan agreed to remove a bunch of those podcasts from Spotify.

Ek threw his employees a bone by promising to invest $100 million more in artists “from historically marginalized groups.”

But Ek stated his opinion again: “While some might want us to pursue a different path, I believe that more speech on more issues can be highly effective in improving the status quo and enhancing the conversation altogether.”

Rogan posted his apology on Instagram. He said people took a few comments out of context since he quoted someone else.

Rogan agreed to have more balanced discussions about Covid. Now he apologized profusely about old podcasts.

I wonder what the mob will bring up next now that they know he will apologize and change some of his ways.

Maybe the Spotify guy should start firing those who think it’s OK to cancel people for their opinions.
I know I would.

With a growing list of those calling for Joe’s cancellation including the Obamas, Spotify may find itself gutted were the cancel crowd to leave and Joe goes to Rumble. Do they risk ignoring Blackrock, Bezos and the rest of the Masters of the World? What is the bigger risk?

Rogan doesn’t seem to be worried. Whatever happens, he will land on his feet. He is not at risk of losing the support of his audience. In fact, it must now be exploding. He may be a bit naive about apologizing for using the “n” word but he hasn’t backed off of what started this: the Malone and McCullough interviews. It’s BS, he knows it, he says so and it must be scaring Spotify. It’s Spotify that is facing elimination here.

Maybe the Spotify guy knows where the money comes from and there is a second offer for Joe’s podcasts. Time to be nice to Joe.

Rogan should just tell Spotify to go EFF itself, then move over to Rumble.

Never apologize. That was his first mistake. Only apologize if you’ve done something wrong.

Or do a quick non-apology and then change the subject.

Only apologize if you have wronged someone AND they are acting in good faith.

Good for Spotify. I have never been a customer, but I will be now.

Rogan did nothing wrong. Nothing. He’s a comedian: what he joked about is nothing Dave Chappelle hasn’t joked about – and it’s very funny:

Never apologize to these people.

Spotify should tell the mob to FO and go cancel themselves and their safe space.

I’m disappointed in Rogan. Capitulating that “it was not my word to use” is a big mistake. You’re either for free speech or you’re not. Nobody “owns” words. Now there’s a crack in his dam, and they’ll never let up. And he brought it on himself.

I’m also disappointed in Spotify. They’re not in favor of “cancelling voices,” yet they continue to remove Joe’s material from their archives. And I’m not talking about this latest group that Joe asked to be removed, but all the casts they removed bit by bit over the past several months that Joe didn’t ask them to do.

Spotify is trapped. They may very well be in a no-win situation. Rogan has much more support than people realize. Everyone Rogan interviewed has now been labeled a right-wing nut. Other than Alex Jones, which of them would that accurately describe? Heck, anyone who doesn’t toe the leftist line is being labeled right wing or eventually will be. There is a lot of red pilling going on right now and Maher isn’t the only one. Cancel culture is a huge black hole that will gobble up everyone eventually, No one is safe. And many in the left are now aware of it. They are rooting for Joe.

Rogan is no free speech warrior. He is a leftist who weirdly thought he automatically had free speech because of his views. He doesn’t understand that the Communist Party is NEVER wrong, and blasphemers like him are Worse than Hitler (TM).

Nor has Spotify covered itself with glory in this affair. Spotify has apparently removed some 70 episodes of Rogan’s podcast without explanation. This after the CEO bragged about his commitment to free speech.

It seems Spotify and Rogan have decided to appease the Communists by carving off and feeding them their fingers and toes one at a time, hoping that at some point the monsters will be satisfied. What is the likelihood that will work?

I strongly suggest reading this:
https://therightscoop.com/this-is-who-is-behind-the-planned-and-coordinated-leftist-assault-on-joe-rogan-spotify-and-free-speech/

That may be exactly what is happening but I think they miscalculated. Rogan will NOT be taken down and not just because of his market value. He has suddenly become the perfect weapon for cancelling the cancel culture itself. Think about it. Canada’s “Great Honkening” is making everyone across the political spectrum keenly aware of the fascist nature of governments around the globe.

Those truckers have proven to be the perfect political answer since they created a physical and emotional base for uniting a huge majority of citizens. They are not going away.

Now add the Rogan situation into the mix with the “American Honkening” about to get going. Suddenly, US and Canadian governors are dropping their mask mandates. Just masks for now. They are afraid. Does Rogan look afraid to you? No. Nothing has really changed for him. He is sitting pretty. He is not going away. This was not what the “coordinated leftist assault” leftists expected. They too stepped into it deep and that creates a major opportunity for a 3rd big player to swoop in.

I’ve been watching the Parliament hearings on the truckers and the Candice Bergen-led opposition is on the warpath and has the liberals on their heels. Here in the US, Rogan has the left on its heels while the truckers haven’t even got started yet. And today, US governors are announcing ending mask mandates? Nope. I see Rogan as a major political asset right now, one that is clearly not going to be taken down.

I agree. I think it’s also possible that MeidasTouch may have a more difficult time than they thought they would.