“It’s hard to lay your head on a pillow and have a restful night when you know that lies are told about you, a specific lie that was not going to be fixed” 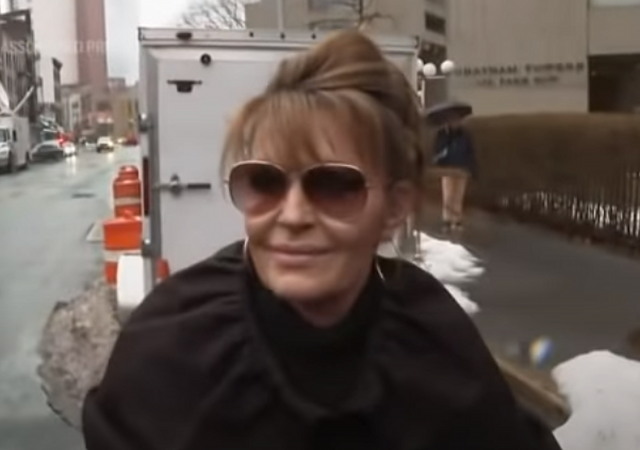 Thursday was likely the last day of testimony in the Sarah Palin libel case against the NY Times. Palin said it was devastating to read the paper’s editorial, linking her to the 2017 shooting of Steve Scalise and other Republicans.

Caroline Vakil reports at The Hill:

Former vice presidential candidate and ex-Alaska Gov. Sarah Palin (R) testified on Thursday during her defamation trial against The New York Times that it was “devastating” to read the 2017 editorial at the center of the case and claimed the newspaper had tried to “politicize horrific violence,” The Associated Press reported.

Palin is suing the newspaper for defamation over an editorial it published on June 14, 2017, titled “America’s Lethal Politics.” The column was published following the shooting at a congressional baseball practice that left Rep. Steve Scalise (R-La.) wounded.

In the editorial, the newspaper also mentioned a 2011 shooting that left six people dead and wounded former Rep. Gabrielle Giffords (D-Ariz.) and appeared to link the incident to an ad that Palin’s political action committee made prior to the shooting.

Sarah Palin said at her defamation trial against the New York Times (NYT.N) on Thursday she felt “powerless” after a 2017 editorial incorrectly linked the prominent Republican to a mass shooting six years earlier, accusing the newspaper of trying to “score political points.”

Before both sides rested their cases, the former Alaska governor and 2008 Republican U.S. vice presidential candidate told jurors in Manhattan federal court that she was “mortified” after the editorial appeared to connect her to inciting murder.

“It’s hard to lay your head on a pillow and have a restful night when you know that lies are told about you, a specific lie that was not going to be fixed,” Palin testified under questioning from her lawyer. “That causes some stress anyone would feel.”

Seth Stevenson of the liberal outlet Slate has decided that Palin has already lost:

When Palin was asked about the accusations that proliferated in the immediate wake of that 2011 shooting—accusations falsely suggesting that she had helped incite the violence—she said they were “mortifying, because I knew what the truth was.” She remembered that she, and her children, had received many death threats around that time.

I admit, at this point in her testimony, I was a little impressed. Palin in no way resembled the caricature I had in my head. She was confident, articulate, and—somewhat to my surprise—quite lucid. I’m not saying she was Stephen Hawking, but she at least evinced a sort of horse sense, paired with grinning charisma, that you could imagine might make her an effective mayor or governor. Then, about a half hour in, the wheels came off.

Palin’s own attorney asked her to shift her focus forward from 2011 to 2017, when a New York Times editorial revived that false connection between Palin’s rhetoric and the Giffords shooting (thereby provoking this lawsuit). Palin responded by saying the Times had “lied” about it “again.” A lawyer for the Times objected, for obvious reasons: No one—including Palin in her filed complaint—has ever alleged that the New York Times got this wrong on any other occasion aside from that one editorial.

The media has the ability, says Palin, to write things that could "result" in hatred or violence.

This is amazing: Turkel asks if Palin's PAC ever "circulated" the cross hairs map. Palin responds, "No. It was put on my website and the media circulated it."

Turkel asking if receiving threats is part of her life. "Every day," says Palin, though she say it "got worse" after the rhetoric following the Loughner shooting.

Axelrod points to the corrected version of the article, and Palin quips, "The one that still has my name in it?"

If you read the so called media reporting on her testimony, she was basically a train wreck. Without actually seeing the trial we’ll ever know for sure.

It’s clear the MSM only hates certain woman, Palin being one of them. Everything they say about the trial – without actually hearing it – is a lie or minimally shaded to protect their own.

We do not need the media blatherer’s and hyperventilator’s to explain to us what went on, we can see for ourselves and make up our own mind. Like weatherman, we can look outside to see what’s up., don’t need weather as entertainment, and it’s wrong half the time ( basically flipping a coin). Time to let the MSM continue marginalizing themselves into oblivion.

We will see if the corrupt NY people has more power. I would love to see the NYT go down, but because this is in NY, my hope is low.

If Palin had presented a brand-new smoking gun during the trial (e.g., in the case of the Loudoun County CRT-wokeism controversy, the rape incident that surfaced just as it was heating up) she’d have half a chance of prevailing on the public shock value. But as this whole case hinges on nothing but boring libel law, and it’s in the defendant’s home state, I don’t hold out much hope.

New York City jury, New York City judge, being asked to rule against the New York Times by a conservative woman admired by the Republican base and hated by the GOPe. She had to sue, because not to would be to admit anything the NYT said about her. But she will not win because those opposing her dare not allow it, to avoid others fighting back.

Whatever happens at this trial, this will be won or lost at the appellate/SCOTUS level. Many want to see the demise of NYT v. Sullivan.

What if she wins; would the NYT appeal it higher, knowing that if they lost it would be setting a much higher precedent? Or would other Leftist media outlets (but I repeat myself) push for them to let it go, to kill any possibility of a precedent-setting ruling at higher levels?

I believe that’s close to the outcome of a recent NY City gun control case that went to SCOTUS. Knowing if they lost there, many similar laws/ordinances would be killed-off in other states, NYC was convinced to withdraw their firearms transport ordinance/law and take the loss, then press SCOTUS to moot the case and not rule on it (which is ultimately what happened, IIRC).