This is the same outlet that refused to cover the Hunter Biden laptop because it wasn’t a “real story.” 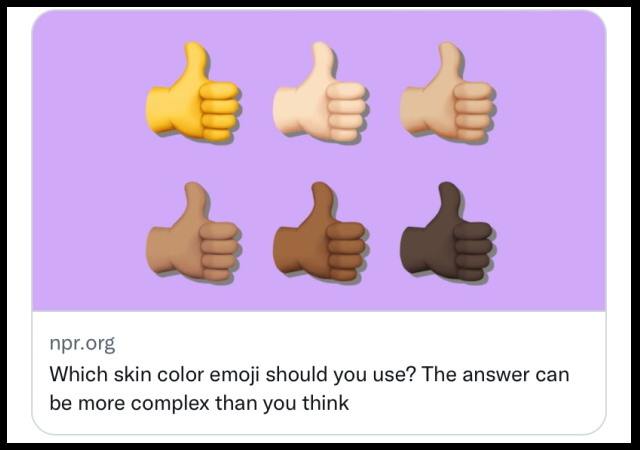 National Public Radio has just published a new report about being careful which skin color you choose when adding an emoji to a social media post.

This is the sort of ‘woke’ nonsense you might expect from Buzzfeed.

Which skin color emoji should you use? The answer can be more complex than you think

Heath Racela identifies as three-quarters white and one-quarter Filipino. When texting, he chooses a yellow emoji instead of a skin tone option, because he feels it doesn’t represent any specific ethnicity or color.

He doesn’t want people to view his texts in a particular way. He wants to go with what he sees as the neutral option and focus on the message.

“I present as very pale, very light skinned. And if I use the white emoji, I feel like I’m betraying the part of myself that’s Filipino,” Racela, of Littleton, Mass., said. “But if I use a darker color emoji, which maybe more closely matches what I see when I look at my whole family, it’s not what the world sees, and people tend to judge that.”

In 2015, five skin tone options became available for hand gesture emojis, in addition to the default Simpsons-like yellow. Choosing one can be a simple texting shortcut for some, but for others it opens a complex conversation about race and identity.

Imagine being one of the THREE journalists who pitched this to an editor or being the editor going, "Yes, riveting take. Write it up."

I can't believe I ever wanted to be a journalist.

A month before the 2020 election, NPR refused to cover the Hunter Biden laptop story from the New York Post, saying “We don’t want to waste our time on stories that are not really stories.”

Why haven't you seen any stories from NPR about the NY Post's Hunter Biden story? Read more in this week's newsletter➡️ https://t.co/CJesPgmGvo pic.twitter.com/jAi7PnpbZf

It gets worse. They repeated the claim that it was Russian disinformation. Yes, really:

The pro-Trump New York Post is owned by Rupert Murdoch, a steady supporter of the president despite recently casting doubt on Trump’s reelection prospects. The lead reporter was a former producer for Sean Hannity, Trump’s best friend on his favorite news network, Fox News, also controlled by the Murdochs. And the story asserted the existence of a meeting absent any documentation that it actually occurred. (The Biden campaign says the tabloid never sought comment on the veracity of the claims.)

The context also screams for caution: U.S. officials say Russian disinformation campaigns have sought to keep Hunter Biden’s business dealings in Ukraine in the public eye. According to The Washington Post, intelligence officials warned the White House last year that Russian operatives had sought to give misinformation to Giuliani to be used against the Bidens. And NBC is now reporting that the FBI is investigating whether the material in the New York Post story originated in a foreign power’s disinformation campaign.

With all these warning signs, other news organizations, including NPR, have held back. Reporters who shared the New York Post story on social media found themselves denounced by Democrats and even many of their peers. Twitter blocked and Facebook restricted the spread of the story, rare moves that gave conservatives a chance for outrage regardless of the merits of the reporting.

The featured image is a screencap of NPR tweet.

What will they do next? A new show, called “All Shades Considered”?

They forgot the Rainbow emoji and the pink emoji…….

That is offensively Binary.

The color used isn’t nearly as important as the finger used.

Exactly. Shouldn’t there be a upright and inverted “V” or “V/” or … well think of the tantric chart and find a “programmer”. … Also, why not all the colors of the “rainbow” ? … For all their liberal professions, NPR is really quite narrow minded.

As a white dude I use only black emojis because (1) I want to honor my beautiful black African wife – Black is indeed beautiful! – and (2) I want to piss off the neo-Nazi black supremacists and their white toadies who get all bent out of shape over this.

This is what happens when your life is meaningless.
Gee, what color is my fake phone hand…this is so important….I feel like this is more important than finding my next meal….

How come they’re not bitching about no rainbow emoji hands?

Have to use all possible means to telegraph intersectionality, ya know.

I identify as green-blue plaid. Where’s my emoji?

My tax dollars, hard at work.

What? No hairy hand emoji?

guess they have to have something to fill the air time

For about three seconds. And always while tuning the presets on a new radio.

How is it WE taxpayers are paying for the sickest people in the nation to be running a radio station?

If you remember, Boehner (yes, that corrupt loser) had the power to privatize it but, of course, did what his swamp masters told him to do.

What are you talking about? NPR is private. It does receive grants from the federal government as well as (indirectly) from various state and local governments and public universities, so it is fair to say that a lot of taxpayer money ends up there, but it is not a government agency, and we taxpayers are not directly paying for it.

How is it WE taxpayers are paying for the sickest people in the nation to be running a radio station?

If you remember, Boehner (yes, that corrupt loser) had the power to privatize it but, of course, did what his swamp masters told him to do.

Shedding the US government of NPR and PBS should be a GOP priority, once we get rid of McConnell and Graham and Romney, etc.

That noise gas been made sine Reagan. Along with ending Amtrak, National Endowment for the Arts, Department of Education, et cetera.

Amen. Republicans have been promising and then punting on such pledges since the Ford administration.

It puts me in mind of the venerable do-nothing office of County Commissioner for Worcester County, Massachusetts. Generations of politicos of both parties campaigned for that office on promises to completely eliminate their own county government. Not a single one of them ever bothered to even try. Many of them actually got re-elected by the brainless local sheep. The issue was finally put to rest by the state, which abolished Worcester County government in 1998 for aggravated mopery, and took over its functions.

Again, it is impossible to “shed” the government of NPR and PBS, because they are not government agencies in the first place. They are private entities. It is possible to stop the federal grants they receive, and that should be done. It isn’t really possible for Congress to stop the funds they receive indirectly from state and local taxpayers, through grants to local entities that then forward some of that money to NPR and PBS; that would have to be for the state and local governments.

Just wait until they see all those crossing signs at corners which indicate that only white men can cross. This was actually used to great effect on “The Detour” when the son told his black neighbor to not cross the street until the white man says he can. We’d need all 57 flavors here in Portland.