North Carolina Father Destroys Critical Race Theory: Racism ‘Only Happening at the Government Level and On the Media’

North Carolina Father Destroys Critical Race Theory: Racism ‘Only Happening at the Government Level and On the Media’

“The policy is going back to the parents because if you think people who love America are willing to fight for it you haven’t met parents yet because I’m telling you parents will go further down any street than anyone who loves their country alone.” 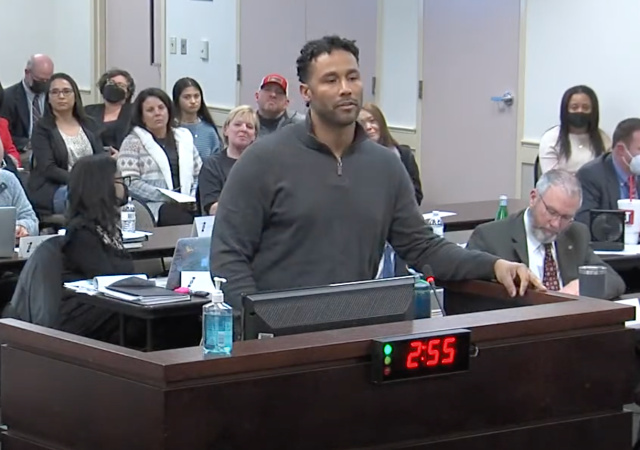 Echevarria took his argument right to the Cabarrus County School Board on Monday. He stated that the mask mandates and pushing Critical Race Theory on students have caused parents “to take back the wheel” when it comes to policy from the federal level down to the most local level:

I’m biracial. I’m bilingual. I’m multicultural. The fact is in America and North Carolina I can do anything I want and I teach that to my children and the person who tells my little pecan-colored kids that they’re somehow oppressed based on the color of their skin would be absolutely wrong and absolutely at war with me and I think that’s the same for every parent.

What the mask showed us is that the parents, the most powerful group of people in our country, that they’re taking back the wheel. Now obviously we had to take the wheel back for the mask but we’re taking the wheel back from Washington all the way to Raleigh and into our local school board because of CRT, all of that. The parents don’t want it. It’s a big fat lie. There’s not one belief there. If you believe in CRT I want to tell you you’re a liar because that means you look at your black neighbor and say that they’re oppressed and you look at your white neighbor and say that they’re evil regardless of the experience that you’ve had with them and we’re not going to do that.

The parents in the United States of America right here in North America and Cabarrus County we know that’s not true because we believe the lives we live. The fact is I’ve been a business owner right here in North Carolina and I deal with white people, black people, Hispanic people. My children deal with everybody. And the racism is only happening at the government level and on the media. The fact is you have races and there’s like you can’t even find them hardly. You just hear stories about them.

Then Echevarria lashed out at schools allowing males to participate in female sports:

I have an eight-year-old daughter who is absolutely dynamic who can do anything athletically, intellectually, spiritually, emotionally, she is a dynamo. And I don’t want a man swimming against her in the pool. The fact is, I don’t want her playing against boys in soccer. I don’t even let my sons rough her up. Do you think I’m going to let your son rough her up?

Echevarria wrapped up his two-minute speech with a reminder that parents are in charge. When push comes to shove parents won’t back down, especially when it comes to their children:

This is what we’re talking about. The policy is going back to the parents because if you think people who love America are willing to fight for it you haven’t met parents yet because I’m telling you parents will go further down any street than anyone who loves their country alone.

Bravo, Mr. Echevarria! You are the new reality in NC and America where we all live and work and play together. It is the self styled power hungry “elites” ,who live pathetic and miserable lives, and are never happy with anything who still seek to divide us along tired old fault lines.
There is a tectonic shift occurring and come November sanity will again prevail!

Gosh, when will the left start calling him a white hispanic?

Rather than engage the man in the arena of ideas, the let will do what it always does and start polemic ad-hominem attacks.

That SOP (std. oper. procedure) for Muslims and the left generally.

We must all be four-square in defending the First Amendment.

Dealing with the current left problem is a warm up exercise for dealing with non-assimilating Muslims who see pushing Mohamad the barbarian’s view on everyone as their highest priority.

I love this. NC got its current lt governor the same way, just a normal dude who loved the 2A and blasted the Greensboro city council one night and people rallied around him.

We need more citizens to do this. It’s the only way out of the mess we’re in.

That would be Mark Robinson who, I hope, will one day be the NC governor. At the moment he’s the Lt. Gov.

Here’s his 2018 remarks to a city council which too often are populated by those who consider themselves our betters,

Thank you for posting the link. Patrick Henry has nothing on the likes of people like messers Robinson and Echevarria seen in links here today.

Let’s get them out in front of voters. The MSM is losing its grip on what can and cannot be seen by the public, it is a leaking dike that is well on its way to full collapse thanks to places like LI and others. Be warned though, a simple change in what they say is not enough. Like cheap politicians, many of them are capable of saying anything and will do so simply to remain in their positions. They must go, disappear – we must be rid of them.

Thanks again for the link.

Post-modern analysis is particularly prone to Motte-And-Bailey arguments. When asked directly, for instance, about the scientific method, a post-modernist will say he’s merely pointing out that perfect objectivity is impossible, that science is created by humans and therefore subject to the social pressures and norms where it’s developed. This seems reasonable enough, but then as soon as you turn away, that same post-modernist blurts out how gravity is a lie to keep the working class down.

CRT is just another branch of the post-modernist tree. As long as you press them, the defenders of CRT can point to eminently reasonable notions, like how race is socially constructed, or how facially race-neutral policies can serve (and even be intended) to reinforce a racist social order. But the minute you’re not looking, they’ll be right back to how everything from math to marriage is racist. There’s some useful content in CRT, insights that expand perspective and deepen understanding, and for that reason I oppose attempts to ban it categorically. But it’s post-modernism at its core, and that means you need to keep that spotlight on it, or else the crazy comes out.

He’s right. When the Left whines about “systemic” racism, they never stop to consider that we all know who’s controlling the system these days, and it ain’t the Right.

Then they’ll argue that systemic racism isn’t an instantaneous thing, it goes back over 200 years. At which point you have to remind them that the same people were responsible for it all that long ago, too.

Lets be honest, the only reason why this is big news is because this is a black man saying it.

Critical Race Theory (CRT) is an ideology of anti-White hatred. While it’s nice when black people speak up for Whites, it’s not necessary. Whites do not have anything to apologize for. The government and all of corporate culture perpetuates anti-White hatred with institutional racism that is far more pervasive and destructive than anything it replaced.

We no longer need to look for magic Negroes to justify what is transparently true & right.

While it’s nice when black people speak up for Whites, it’s not necessary.

In case you didn’t notice, he was speaking up FOR parents, and AGAINST the presuppositions of CRT. He’s gone miles beyond the black vs white dichotomy, and he’s splendidly articulate while he’s at it.

Are you sure that he is not a white hispanic???

Those who view every event through the prism of race and are unable to speak or write without invoking appeals to this or that race or that authentic members of Z race should take x action or refrain from performing y action are themselves practicing racism.

Thankfully most, in fact nearly all, of us have moved beyond such simplistic ideas that seek to assign either +/- to individuals solely based on an immutable characteristic; the color of one’s skin. Of course there are still those who seek to divide us into artificial tribes for their perverse reasons. Some to engage in classic rent seeking, others because they want an ‘other’ to blame their failings upon. We should call them out for what they are; racists and refuse to engage in or respond with the language of tribalism.

There is nothing useful in CRT, it is bald faced black racism, by black supremists.

Anybody else notice the two tooled-up enforcers come in at 1:49; stand there focused in on the speaker from straight aside, and straight behind?