The kid’s father and stepmother are in law enforcement. 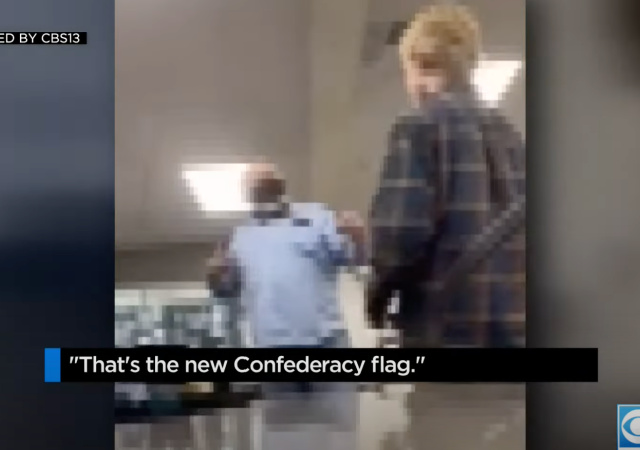 The incident took place at California’s Lyman Gilmore Middle School in Grass Valley. Other students took video of it.

This teacher sat behind Lillar in math class and tried to provoke an argument like a child:

Lillar said he has never had a teacher yell in his face before.

The school told Lillar and his family that the substitute teacher will not teach at the school again.

Superintendent Andrew Withers told CBS13 the district is investigating the matter, but that he can’t make more comments: “The California Education Code §44953 allows for the immediate dismissal of a substitute teacher. Our district expects all educators to perform their duties with utmost respect and professionalism.”

Another shrieking ninny heard from.

Another shrieking ninny black heard from.

He looks pretty white to me in that video.

The district is going to fire her for being dumb enough to let herself be filmed doing this.

Thank God these crazy people are exposing themselves!

Whoa! That’s a whole ‘nother level of teacher issues!
(Sadly, that’s only funny because it has some truth to it.)

Him. I assume. Though nowadays who can tell?

Ooh, the kid, what a playa!
“I’m afraid because somebody like (the teacher) might have a weapon in his car and come after a student.”
Recognize that? “Our saaaaafety is threatened! Cancel him!”
Well, no question, cancel him right away! You’d do it for a Marxist snowflake in a NY minute!

It’s become pretty damn obvious that crazy leftist teachers have not only infested our schools, but they’ve only hired their own for the past 20 years. Now, just EVERY teacher (lower grade schools all the way up to universitie) is either a leftist automaton loon, a transvestite or a pedophile – or all three,

You have to be NUTS to send your kids to public school. Absolutely nuts.

Private schools are catching up. The “elite” ones have been long-infested with leftist BS.

I became a teacher after I retired. I feel that we, as the older generation, have a responsibility to teach the younger generation. I spent 7 years as a high school science teacher. There are plenty of teachers who aren’t leftists. Retired cops and firefighters, retired military, former business owners. Many of them are being chased away.
During my 7 years, I was physically attacked in my classroom, verbally abused and threatened by parents and their children, and regularly accused of racism, favoritism, and personally attacking students.
I watched as my high school students were passed from year to year, even though they were only reading at a third grade level. More than half of my students were at least two years below grade level in reading and math skills. We as teachers were called into the Principal’s office if too many of our students weren’t given good grades. I eventually couldn’t do it any longer. I left last year after my grades were changed, and all of my students were given passing grades, even if they never attended a day of school.

Yikes. I’ve lived that, but my current school doesn’t do it.

Thank you for your time teaching and I hope you can continue to educate. The one warning I will give is that when it came down to my time to leave, I found most of those “normal” folks were just as loony left as the admins, they just hid it better.

I was a School Nurse for almost 9 years and I can say that I have seen all of the same. The sad part is that for teachers who aren’t left wing loons, they are not just being driven off now, they are being actively pursued and set up to be fired so other leftist loons can take their place.

Thank you for taking the time to teach our children. I content myself now by thinking of the students I could reach and the ones I kept safe. Neither of us wasted those years.

My then-wife secured an associate professorship at a respected New England university. She was there for one teaching year. She tried to fail students who didn’t show up to class. The students’ parents complained to the dean. The dean supported the students. She didn’t play dat. We left without warning about two weeks before the next year’s fall semester started. Normally, I wouldn’t have approved of such an action, but the administration earned the disrespect, for the disrespect they showed my wife.
BTW, this was back in 2000, so this is not new. There’s little interest even in higher education to actually educate students.

My wife taught high school home ec. The few times she had to take a day off, she prepared lesson plans for the substitute; topics/pages to cover, questions to facilitate discussion, quizzes, etc.

One substitute was a recently graduated student who ignored the lesson plans, sat on her desk and asked the students “what do you want to know about sex?”

She never subbed there again. Though by all reports, the kids liked her.

You don’t have these kinds of problems when you homeschool.

Well, you might, if your kid is contrarian enough. 😉

I strongly suspect that one of the main reasons people react this way is that the media told them they should. This is exceedingly sad and infuriating at the same time.

Everyone is responsible for their actions. It doesn’t matter what others have told them.

A question related to Twitter links: is anybody else experiencing the following: if I click on a Twitter link like the one above, and I’m using an iPhone with Safari, I can see what is in the link for about 15 seconds and then the Twitter enrollment thing pops up and basically takes over the browser until I close it. Is anyone else seeing this?

Happening on PC as well. if you try to scroll down you get a “Sign In or Sign Up message, you also can’t go past that link, get same message.

Usually I can see the item directly linked to, but if I try to scroll down the page and read more, I get that behavior.

Clearing out all your cookies from Twitter reduces the behavior, as it forgets how many times you’ve been there before. In fact, last time I did it, it eliminated the behavior completely (a first).

Temporarily turning off Javascript and reloading the page sometimes helps, too.

But these are more in the line of desktop tricks that may be more difficult or even impossible on some cell phones.

Too ignorant to be teaching. Except in unionized schooling.

I think I missed the formation of a new confederation.

Be funny if that substitute starts getting lots and lots of speeding tickets.

“Your head light’s out.”

That’s our whole Democratic Party. They are quite explicitly identifying black people with criminality. If you are for law enforcement you are against blacks.

THEY are the new/old Confederacy. First Democrats fought for slavery, then they spent a hundred years building up their network of Jim Crow anti-black laws, then they fought the Civil Rights Acts that ended Jim Crow, and when they lost that they immediately started identifying blacks with their criminal component.

People can’t be judged by their character if it is too dangerous to engage with their race enough to be able to judge individual character. Law enforcement, getting the criminal threat out, is the key to blacks being treated as individuals.

On average, blacks are astoundingly dangerous. The discrimination against blacks that that danger creates is a very real thing and it is 100% the fault of black criminals. Stop blaming non-blacks for the harm that black criminals are doing to all blacks.

Democrats though, they want this. They want black criminals running wild so that blacks as a race will be destroyed so that they can be used as a political weapon. That is Alinsky communism 101, and Obama, now in his third presidential term, is a lifelong Alinsky communist. Hillary was directly mentored by Alinsky himself. That’s the top of the party for the last 20+ years.

The school told Lillar and his family that the substitute teacher will not teach at the school again.

If it were up to me that substitute teacher would not be teaching in any school whatsoever. This shows that he cannot be trusted around children. I would immediately fire him, pull his credentials and make damn sure he never is put in a position of trust with children ever again.

That’s the way we end this lunatic insanity. We impose a zero tolerance and don’t put up with these people that think attacking a student in this manner is appropriate.

(If you have a problem with the “thin blue line” mask that a student is wearing then take it up with the school administrator and let them handle it. And then get the hell out of the classroom since you’re such a delicate snowflake and let someone else be substitute for the day.)

I have a strong distaste for how the reporter covered the meaning of the “thin blue line flag”. It IS a symbol of support for law enforcement. It IS not a symbol of opposition to the social justice movement. Democrats are the only people that believe you need to abolish police to bring about social Justice. Sane people understand that you can both support the police and believe that all people deserve to be treated equally under the law.

The problem is that is a distinction without a difference.

You can’t support the police if you think they are racists hunting down black people who brutalize black people because of their racism.

If you don’t think police treat people equally now (the pro-police position) I don’t see how you could support them and defunding bad government agencies is a perfectly valid move.

Supporting cops means you think they are worth supporting which yes is anti-SJW.

I also do support police and think they do treat people equally. If I thought police were racist I would be with the left shouting defund and replace them government agents are not sacrosanct.

Someone (maybe here) likes to say that the minute you qualify any noun (like justice) with “social,” you’re basically negating the noun. It means you are letting some pressure group define what is right and what is wrong, instead of some codified standard.

The thin blue line flag IS in opposition to the social justice movement, IF you let the “right” people define what “social justice” is. And it’s subject to change at any moment with no warning, same as “virus misinformation” does when it can no longer be denied as truth.

At least it is a win that the school fired her, a lot of principals agree with the rant in question so we should be glad this one didn’t.

Typical Lunatic Leftist reaction. That thing is a Think I don’t like so I am going to screech that it doesn’t mean what it actually means it means…(insert typical leftist tripe here).

shame the kid didn’t have a real stars & bars on him–reminiscent of the crocodile dundee scene: “that’s not a flag…..THIS is a flag!”

Evidence that liberals are never satisfied. Take away the Confederate flag and now they’re after other flags (that they are able to label as surrogates for Confederate flags without any substantiation). Surrendering anything to them never results in less complaining, it always results in more. They want to prevent anyone who has any non-approved thoughts (of any kind) from expressing those thoughts in any way.