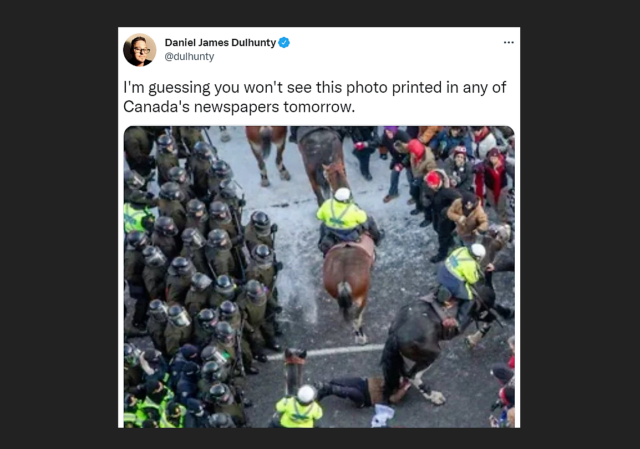 The Ottawa police claimed someone threw a bike at the horses, which made them scared.

Sero announced on Twitter she is moving to Florida with her family.

Here is a picture of the horses stomping on Sero.

Candy Sero, a 51 year old Tyendinaga Mohawk Wolf Clan grandmother was among those injured by a police horse charge in Ottawa yesterday. Sero, who uses a walker, has been on the front lines supporting the protests against vaccine mandates since shortly after they began in Ottawa. pic.twitter.com/KmPwOXYuJ0

Weekend reports said Sero passed away, but her niece posted on Facebook that her aunt is alive. The incident broke her clavicle.

Sero then posted a picture of herself on Twitter.

Care to correct the "no injuries" statement @Ottawapolice?? I was nearly killed by you #BlackFaceHitler. pic.twitter.com/r8X08zruMp

I live in FL and it will be an honor to have her here.

Has anyone set up a GSG account to help her out?

She’d better be careful: Florida isn’tt that far from Georgia, and she just might get trampled by Stacey Abrams.

That’s ridiculous. Stacy is in Ukraine. She just ran over a car /s.

Her name isn’t Abrams for nothing.

As long as she doesn’t do what the rest of the refugees from the north do- endlessly lecture us on how things are better “up north” and then continue to vote for the same policies that made them want to move here in the first place.

I am snapped.. Totally.. Bless and keep her… I saw the video. she was saying that this is a peaceful protest before she was trampled… I hope she loves Florida… TY Mary.

Get well soon, Grandmother Sero! It looks like you and your family will have a warm welcome in Florida.
Florida seems to be the place to go, since all of the democrat governors are heading that way. I “wonder” if the guvs will all be wearing their masks? Parents in their home states probably want to know. The guvs and their aides will certainly be on the lookout for any cameras exposing their phony nonsense. I’ll watch for the footage of their lightning-fast quick draws.
I’m reminded of my army tear-gas training, where my friends and I had our gas mask cases open and our hands on our masks to be ready for the DI’s “surprise” gas attack! Good times.

Florida is getting too crowded. There are tens of thousands of Canadians in florida, so many so, mostly snow birds , but so many that streets are in French because they are from Quebec mostly. Businesses have everything in French.
Something not right about that

Push back, and don’t give an inch. Demanding everything be in French – and eventually only French – is baked into Quebeckers DNA.

Was anyone complaining when the Cubans made Spanish the “official” language of anywhere south of Ft. Lauderdale?

There, I’ve fixed your headline.

A Indigenous person can freely move back and forth, FYI. there is a special treaty in place for Indians that allows they free passage and residence in whatever country is their choice. when she moves she can become just as american as the next American Native.

I still think that Trudeau might learn a thing or two from some time under some horses.

Wishing Mrs Sero and her family well in the free state of Florida. There is an interesting legal irony here. Mrs Sero is a member of the Mohawk Nation , whose ancestors fled New York State in the 1790s and sought refuge in Canada.

While there may well be a good political asylum claim case here , she is also likely entitled to the benefit of the. ‘free movement’ provisions of the Jay Treaty.

As a Native you can live anywhere, the border does not apply to you , there is some special carve out for them.

The Jay Treaty provided free travel, it was later court cases (Diabo V. US) that enshrined the right to live and work in the US.