Yikes. Even Democratic governors admitted they got better service and communication from Trump’s White House. 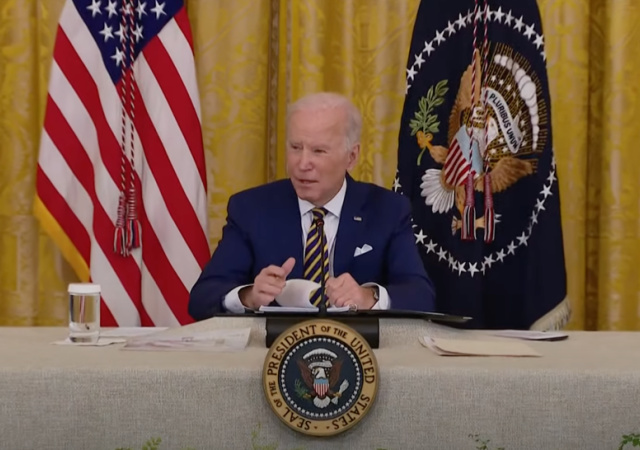 Democratic and Republican governors, like most people, rarely agree on anything.

The governors agree on two things: Biden is failing and we need to enter the endemic stage of Covid.

Republican Arkansas Gov. Asa Hutchinson, chair of the National Governors Association (NGA), told Biden that governors on both sides want the CDC to help them “go from today to more normal.”

Hutchinson said: “We need the CDC to help us to have the right standards to end this pandemic and move to more endemic status.”

Biden admitted the government has “got a way to go on that,” but thinks it’s the way they’re “moving.” He promised they would “try like the devil to keep schools open.”

Yeah, we’re all frustrated and ready to move on. Some of us luckily live in saner states like Oklahoma where we have been living like normal people for a while.

Also, our private schools opened in August 2020 with little to no problems.

So I don’t know why Hutchinson thinks the CDC needs to set the standards. They’ve done an awful job from the beginning. How about each state do what they need to do?

Biden also promised more money…but only if the states use the money to push his agenda while Harris harped on about voting rights:

Biden said he has “made it clear” that some of the funds should be used “to fight violent crime,” and pushed states to hire “additional police officers,” and to invest in community violence interventions.

He also said the country needs to “do more” for essential workers to keep them on the job.

“That can mean, as some of you used, hero retention bonuses, higher pay temporary, paid leave to combat burnout and essential health care workers,” Biden said.

Speaking before Biden, Vice President Kamala Harris renewed her push for voting rights legislation, telling the group that “regardless of who we voted for in the last election, we all as leaders of our nation understand the importance of ensuring that all people who are eligible to vote have an ability and a meaningful ability to vote and access to the ballot.”

“So I would ask that in this coming year, we work together to ensure that all Americans who are eligible to vote actually have meaningful access to the ballot,” Harris said.

Gag me, lady. Everyone can vote in America.

Let’s talk about grades. Biden sucks along with his administration.

Hutchinson did not give Biden a letter grade. He described the administration as “poor” when it comes to border security, the Afghanistan withdrawal, and inflation.

Arizona Republican Gov. Doug Ducey said Biden has a “failing administration” and criticized Biden for going back on his promise to govern as a moderate:

“The failed exit from Afghanistan, the surging inflation that’s a hidden tax on everyone in this country, the highest cost of everyday living that we’ve seen in 40 years, the crisis at the border that’s not only affecting Arizona but every state with fentanyl spilling in, and now this muddled policy in Ukraine, we’ve never projected more weakness on the global stage, and there’s no real sense to his economic policy,” Ducey said.

Idaho Republican Gov. Brad Little reminded everyone that the governors had weekly calls with the previous administration. Little claimed his Democratic colleagues admitted they received “better service form [sic] the Trump White House than they are from the Biden White House.”

The governors now speak to someone lower on the totem pole because Biden wants to use “Congress to get their initiatives done.”

Well, Biden and his minions want big government. They don’t care about the states.

Little is correct. All states are different and “what works in Idaho doesn’t work in Virginia or Maryland.”

“I sure as heck did not vote in support of President Biden when he was running for office, but there was an expectation with a lot of those independents in America that said, ‘well, I’m hoping he will use his relationships, reach across the aisle, build consensus, find some way to get Republicans’ voice in there … not come in with an authoritarian approach … make it a one-size-fits-all,” Sununu continued.

Biden, Harris and Biden’s handlers will likely go down in history as complete failures.

No, only Biden and Harris will go down as complete failures. The ones hidden behind the curtain that are really controlling things will simply walk away when the poop hits the fan with no penalty.

They will get a job as a lobbyist, nothing to see here

I’m suspicious of information I hear from Government officials of both parties. I’ve reached that point.

It’s not about what anyone sane thinks: all the damage Biden is doing is on purpose. The rat is completely compromised. In other words, bribed and extorted.

Just like that… three top universities in the state dropped the mandate..

They do what they want because they aren’t told it is not legal. No warning makes them act
Like they have a green light.

See what happens when they are disavowed of that notice n?

Time for AGs to step up.

I need to start wearing my glasses

Is it just me or is it hard to believe that anyone is really that stupid?

That’s why we have to prevent McCarthy from becoming Speaker if we win the House this years.

Canada conseravtives did just that:

Fuck joe biden* and kamal harris are both lying. It’s all they do. Doubt they give a damn about anything but power and money for themselves.
This other shit they’re spewing is just for public consumption. They want power and money and screw the rest of us.

After you’re done fucking them, then what?

Pass them around. They’re used to it.

“I just cannot believe people would actually believe Biden would be a moderate as president.”

All those people who expected him to be an anvil in a windstorm… I’d love to ask them how they like their new helium balloon in a hurricane.

NEVER underestimate the modern American public: leftist schools and media have corrupted and mangled way too many brains.

This could not have been demonstrated any better than by Whoopi Goldberg and her astounding arrogance and mind-blowing ignorance of the most basic history of World War Two and the reason for the Holocaust.

We can’t trust younger people anymore. And the former collective “genius” of the American people is long gone.

Alexandra Cortez and Cori Bush are more the standards. Even Obama seems smart in comparison.

I’m not surprised that the Uber-RINO Asa Hutchinson would be begging Biden to have the CDC “help get us to the endemic stage.” The CDC has been wrong about EVERYTHING and Ron DeSantis has proved that over and over again. All the states need to do is follow the procedures that Florida has provided, except that monoclonal antibody treatments have been BANNED by our government because they’re “not effective against Omicron.” I have news for them, Delta and many other variants against which the treatment IS effective are still out there!

I assume someone told the press the Omnicron Variant is a dud except in the very old and folks riddled with comorbidities. As it spreads, people get it, recover, and will never have the “COVID” Syndrome.

The virus is SARS-2. If you catch it, recover with anything from nothing but a positive test and zero symptoms or up to like a bad flu but no hospital treatment, you DID NOT have the COVID Syndrome.

The older you are, the more obese the more likely the virus will kill you fast, or if you’re immuno-compromised then you might get the massive inflammation (Usually the lungs.) that kills you slowly.

Once you’ve had Omnicron, and recovered it’s very unlikely you’ll ever have the “COVID” type illnesses when exposed to the MANY future mutations of SARS-2 virus.

There is a very strong theory, but not 95% proven to call “Medical fact” that the Novel Coronavirus causes some people’s body to attack it’s own tissue. Even after the virus is cleared. Since all the variants and the original went deep in the lungs, that’s usually where it strikes, but the heart is next on the list for some much smaller percentage of people (I was one.).

They realize now so many people are catching Omnicron Variants BA-1 and BA-2 very soon it’s going to run out of people to infect and the “Omnicron Wave” will be over by the end of March, middle of April (2022) and there won’t be alarming cases numbers, the hospitals will clear out the ICU’s with death or recovery, and it’ll pop up on and off for the next few decades, mostly hitting the old and sick, and it seems to LOVE the morbidly obese.

So now some are back peddling, trying to get ahead of their idiotic overreach, and vaccine mandate that doesn’t work on the new variants, and people being pissed off they did the wrong thing at the wrong time constantly through the entire Pandemic.

Also they don’t want to admit/take blame for their LOVING lording power over people constantly. Just because they could.

One of my friends (a woman in her late 20s) got the shot so she could travel abroad. Since getting the shot and the ‘boosters’, she’s gotten Covid – TWICE in 3 months! I worry for her when she tries for kids.

This ‘vaccine’ is proving to be a very sinister thing. There are indeed nanoparticles in the shot, despite all the mocking those claiming same:

And the ‘mainstream’ worrying starts:
https://medium.com/microbial-instincts/concerns-of-lipid-nanoparticle-carrying-mrna-vaccine-into-the-brain-what-to-make-of-it-42b1a98dae27

Many TOP scientists and reserach doctors beiung censored are sounding the alarm bells, especially the INVENTOR of the RNA vaccine, Dr. Robert Malone.

And when you have a weirdo narcissist like Bill Gates cackling as he describes people dying of Covid, and boosting Communist China at the same time – and a hack like Fauci has been hiding his multi-million dollar fortune – you know Xi is running the show and Covid has been a weapon in a war against the West.