This is the second time GoFundMe paused the fundraiser. 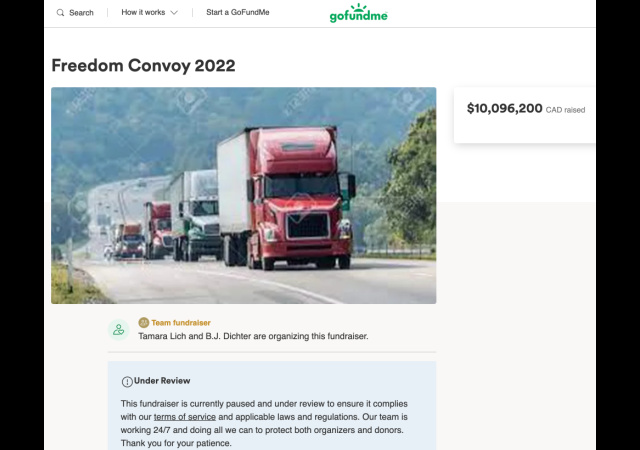 The Canadian Freedom Convoy to Ottawa has faced backlash from Big Tech along with cruel rhetoric from Canadian leaders and the left.

All they want is to stop government overreach and end the COVID vaccine mandates.

GoFundMe Started its war with the convoy last week when it paused its fundraiser on January 27th when it hit $5 million because it requires “fundraisers be transparent about the flow of funds and have a clear plan for how those funds will be spent.”

The company turned the fundraiser back on. GoFundMe only released $1 million of that $6 million later that week even after the organizers provided a detailed plan.

The convoy started its journey to Ottawa on January 29th.

The fundraiser hit $10 million between January 17th and February 2!

GoFundMe paused the fundraiser again for the exact same reason even though the organizers gave them a plan last week:

This fundraiser is currently paused and under review to ensure it complies with our terms of service and applicable laws and regulations. Our team is working 24/7 and doing all we can to protect both organizers and donors. Thank you for your patience. 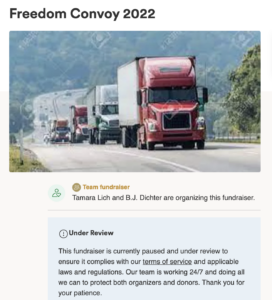 The description of the fundraiser includes: “In order for your generous donations to flow smoothly, the good people at Go Fund Me will be sending donations directly to our bulk fuel supplier and are working out the details now which means your hard earned money is going to straight to who it was meant for and need not flow through anyone else. Any left over donations will be donated to a credible Veterans organization which will be chosen by the donors.”

I mean, WHAT? What is the freaking problem? GoFundMe told Fox News Digital:

“Recent events in Ottawa, Canada, have generated widespread discussion about the Freedom Convoy 2022 fundraiser on GoFundMe. We wanted to provide clarity around the actions that our global Trust & Safety and Customer Care teams take every day, just as they have with the Freedom Convoy fundraiser,” GoFundMe wrote in part.

GoFundMe went on to list the means by which it intend to ensure the integrity and transparency of the organizers of the fundraiser.

“As the activity surrounding the protest evolves, we have been monitoring the fundraiser to ensure the funds are going to the intended recipients and that the fundraiser remains within our Terms of Service. Our monitoring includes maintaining close communication with the organizer as well as collaborating with local law enforcement,” GoFundMe said.

“This process takes time and may slow down the withdrawal process. If the fundraiser does violate our Terms of Service or does not directly benefit the intended beneficiary, we will remove it from the platform,” the site added.

You. Already. Did. This.

I wonder what will happen next. Facebook already targeted America’s “Convoy to D.C. 2022” group by removing it along with the personal pages of the man who formed the group and one of the truckers.

Yet another reason why no intelligent, conservative/populist/libertarian cause should ever, ever use GoFundMe.

It isn’t so much the money as it is the message, and this issue has lots of eyes on it.

I don’t know that they were stupid to stay off. They get far more pub by being banned from facebook than from never being there in the first place.

I think it’s a badge of honor these days.

I think the DC convoy switched to Gab.

How many times does it take for people on our side to get the damn message?

And do not contribute to organizations that do use it.

I wanted to contribute to the Truckers amd when I saw it was gofundme.. nah, throwing the money away..

Such a massive mistake to gather any donations on the left wing crap. Now they will
Hold these funds, no way the Truckers get the money
Much better sites around that don’t do this crap.

You are absolutely right!

Apparently, not all options are on the table, at least has been removed:

No surprise to many of us here, but most of the world didn’t quite ‘get’ it.

Next, is Biden’s downfall. Watch this:

I don’t remember the fascist org like BLM having that issue.

So when the Canadian government contacted GoFundMe, they caved like a wet noodle.

Subscribe Star. Pay Pal with make the money vanish. Whoever is handling the finances is commie jerk and should be gotten rid of.

Meanwhile, BLM is not targeted even though the head is buying mansions with the proceeds.

Would be a good time to remind people that Jacob Blake, a domestic abuser who was shot by police while he was trying to kidnap children, got to keep his GoFundMe money.

As did the convicted Molotov Lawyers and the Sorority Terrorist.

Go Fund Me is run by Leftists, anyone other than Left Wing causes need to look elsewhere

How about a convoy in support of the January 6th prisoners?

I was just listening to a recent TimCast and Julie Kelly stated that there are almost 3 times as many political prisoners being held over the 4 hour January 6th protest than were arrested in all of the BLM/Antifa riots.

Excellent podcast. Two hours long but well worth it.

They definitely deserve something, but I don’t see the nexus with truckers. This convoy is truckers protesting about the way they‘re being treated. So there’s a reason why they’re doing it. Having a convoy for an unrelated cause needs an explanation.

But those prisoners are definitely a worthy cause, and the next president, whoever it is, ought to pardon everyone involved in that day’s events, except those who were with the FBI or Antifa, or who actually assaulted someone.

Why should they do pardoned? They were responsible for attempting to subvert the transfer of power; that’s a serious crime and the fact is Garland is starting with the low level players and working up to the juicy stuff. That’s been noted in some of the statements as the stated aim. You do realize that there is no evidence of antifa and the FBI being there don’t you?

Honestly who cares about the prisoners, its not like conditions in jails hasn’t been highlighted for decades, why care now.

Apparently fat in the head = brainless.

So damn serious that no one was charged with any serious crime until a year later when everyone noticed that no charges of serious crime (sedition, oh my!) had been proffered.

And those recent politically motivated charges are nothing but a joke, just like fathead.

And I would be much more okay with this reasoning if the same standards were held to the rioters and arsonists who attempted to stop President Trump’s inauguration (i.e. the peaceful transfer of power). Or to those who carried out a days-long siege on the White House in an attempt to assassinate a sitting president.

When you condemn those two events and insist the perps be locked up in subhuman conditions and beaten by guards for over a year, we can talk. Until then, sit down. Sit all the way down.

Good idea! Besides, it looks like your brother has everything under control in the honkening:

“I wonder what will happen next.”

Leaders of the convoy have been demanding to speak to the Canadian Parliament since at least 1/31. Here is the very heated debate between conservative and liberal party speakers that captures the tone deaf establishment liberal government.

Obviously, the liberal party is adamant in their deafness and is getting away with their lies thanks to the Speaker who is clearly allied with the Trudeau establishment.

1) Go Fund Me is totally subordinate to the Democrats and their allies around the world farther to the Left. Any money given to them is the same as giving it to BLM/Antifa.
2) Canada does have a history of using its military against its civilians. The military and their equivalent of our Three-Letter-Agencies were at literal war with the FLQ in Quebec. In theory, they’ve since amended their “War Measures Act” that governs what their military can do to ban military attacks on civilians. Note that the RCMP and those Agencies were not limited.
3) Even if the law was in fact changed, military high commands are intensely political in their nature. And things can be done covertly. And the flags flown easily can be false. For those who disagree with the government to keep their disagreement within “the system”, it requires that the Social Contract be accepted and obeyed by all sides. And that all sides can trust their opponents to obey that Contract.

Days after banned fundraisers for Kyle Rittenhouse :: GoFvndMe allowed a fundraiser for a black moslem terrorist who attacked ( Jihad ) on Christians in a Christmas parade massacre – killing many white women and children.

I suspect it has something to do with a member of the Ottowa City Council floating a proposal to seize the account to “cover extra policing costs”.

“Ottawa’s local government has slammed the Freedom Convoy protestors, with Ottawa city councillor Mathieu Fleury posted a note on Twitter on Monday that he would be launching court actions to seize cash from the GoFundMe fundraiser for the protests, which has amassed over ten million Canadian dollars as of Wednesday.

“This morning I have asked the city manager and city solicitor to immediately launch court proceedings targeting the millions of dollars in funds frozen by GoFundMe so Ottawa taxpayers are not left holding the bag for these protests,” Fleury said before locking his account and making his Tweets private, which they remain as of Wednesday. Following the comments, GoFundMe actually froze the Trucker fundraiser, publishing a statement saying they were reviewing the account.”

“How dare they have money that we can’t grab! Don’t you know we’re the government? It’s ours! Now gimmie!”

https://www.givesendgo.com/
Christian fundraising operation. Use it instead of the pinko gofundme leftists.

I’ve read reports that the first reported “holdup” of trucker funds was nothing but total MSM disinformation, and the funds were never held up at all. It’s hard to know who to believe. Nevertheless, using GoFundMe was a stupid mistake from day one.

GoFundMe is admitting that they have seized the money, claiming basically that the Truckers’ presence in Ottawa constitutes threats, If you want your money back you have two weeks to file for it, and they probably will stall you till the deadline is past. The $9 million will then go to outside charities. I’m guessing the Canadian Liberal Party, the US Democrat Party, Antifa, and BLM.

The questions are a) how many boxes did they start with in Canada and how many, if any, are left? b) How long before the Democrats try the same thing here?

Republican state AGs have started an onslaught against GoFundMe for this.

GoFundMe a private company making a private decision to act against a political movement in Canada is being attacked by State Attorney Generals using the iron force of law.

I love it, I have no use for Laissez Faire. Just as Republican AGs who have forced GoFundMe to back down from redirecting the money instead of refunding are not stopping and will be taking their pound of flesh from GoFundMe…Wonderful.

The “Corporate heaven, government hell” slogan needs to die if we are to have any success. Thank you government for cracking down on private American Company that acted against Canadian political movement.