“The chilling effect of self-censorship is real — and can have an alarming effect on how Americans communicate.” 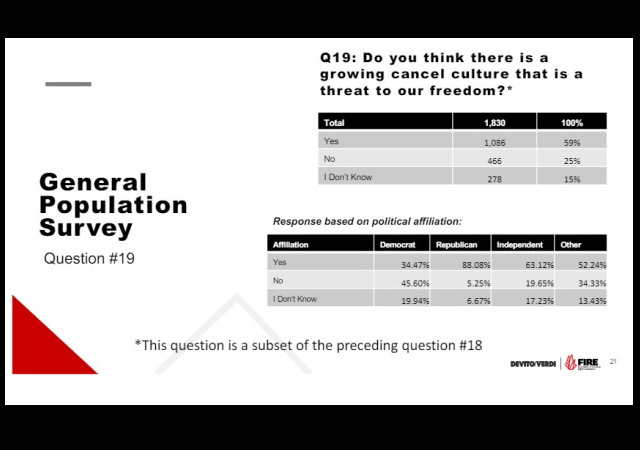 The Foundation for Individual Rights in Education (FIRE) has released a new survey that finds that most people see Cancel Culture as a real threat to democracy and freedom.

The only people likely to be surprised by this are progressives who insist that Cancel Culture doesn’t exist.

Nearly 6 in 10 Americans feel that our nation’s democracy is threatened because people are afraid to voice their opinions, according to a new survey from the Foundation for Individual Rights in Education.

The nationally representative survey of 2,500 adults examines Americans’ attitudes toward various issues related to free expression, including cancel culture, self-censorship, and the constitutional limits to speech.

“A lot of ink has been spilled debating cancel culture,” said FIRE Vice President of Communications Nico Perrino. “Do Americans see it as a serious cultural phenomenon? What’s its effect on free speech? We aimed to answer some of those questions with actual data. The verdict is in: Americans do see cancel culture as a significant cultural trend that has a real effect on the country’s free speech climate.”

The concept of “cancel culture” has become increasingly prevalent — 73% of respondents have heard the phrase — as people, brands, and cultural works face public repudiation by those who consider them offensive or otherwise problematic. Of those familiar with the concept, almost 60% of respondents said that there is “a growing cancel culture that is a threat to our freedom.” 25% said there is not.

One point that gets emphasized is that Cancel Culture inspires fear, causing people to self-censor:

One especially significant finding from the survey reveals that nearly three-quarters of respondents agreed that people can experience significant stress — even to the point of engaging in self-harm — because of the public backlash against something they said.

“Cancel culture isn’t just about what gets said and then punished,” said Perrino. “It’s also about what never gets said for fear of punishment. The chilling effect of self-censorship is real — and can have an alarming effect on how Americans communicate.”

This has become a pervasive part of our actual culture. Last week, Neil Young tried to get Joe Rogan canceled, and it backfired on him. Now the mob is coming after Rogan on Neil’s behalf.

Conservative legal scholar Ilya Shapiro said some things about Joe Biden and SCOTUS that the left didn’t like. Now the left wing mob has jeopardized Shapiro’s teaching job at Georgetown, which he just started.

There is a new high-profile case almost every week, and it won’t stop until the people at the top stop capitulating to the mob.

[Featured image is a slide from the FIRE report.]

We have to make those that wish to “cancel” us very uncomfortable.

It’s pretty uncomfortable when you get your ass kicked.

Or rather, a reinforcement of totalitarianism and enslavement

It’s what Communists do.

And you note that it is only the self-identified democrats in the survey who are less than 50% yes, this is a threat. That’s because they are the extremists doing the cancelling, or their particular flavor of democratitis hasn’t yet been targeted for cancellation (it will happen, once the pesky republicans have been silenced, but they can’t see the writing on the wall yet).

Some of the responses are odd. A large percentage says they think hate speech isn’t protected ( question 8) but do not worry about what they say impacting their life ( question 12). Ok, Einsteins who decided what hate speech is?

“The only people likely to be surprised by this are progressives who insist that Cancel Culture doesn’t exist.”

The standard defense against this gambit should always be to respond;
“Terrific, then you won’t mind us criminalizing it.”

What if, instead, the survey gave concrete examples of the kind of statements or actions which get some people cancelled and then ask whether such things should be tolerated or punished? If punished, what punishment does the respondent think would be appropriate?

No age or any other demographic breakdowns in the survey, there isn’t any age breakdown…..there is reason to be skeptical of the poll.

Well, to be technical, she said that the holocaust was no about race. However, historical record shows that to the nazis that it very much WAS about race and they identified their “aryan” race as the superior.

Very true, and actually Jews can be considered a race in the sense that its inclusive of many who are culturally Jewish and no longer practise the religious element. From a legal sense i’m not sure the law differentiates between anti semitism and racism; from a practical point of view they function in a very similar way.