56% of Americans do not approve of anything Biden has done. 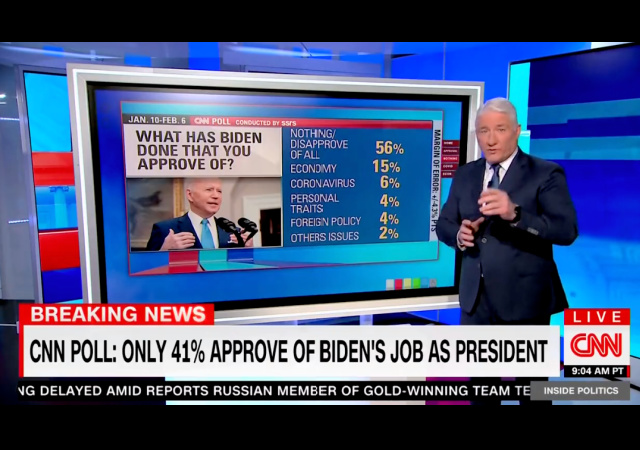 A CNN poll conducted by SSRS in January and February found that America doesn’t like Biden.

The articles about the CNN poll concentrate on the 56% who do not approve of anything Biden has done during his presidency.

The buried lede: 57% of Americans consider Biden’s first year in office a failure.

It doesn’t surprise me because the “disapprove” column came out on top for every question: 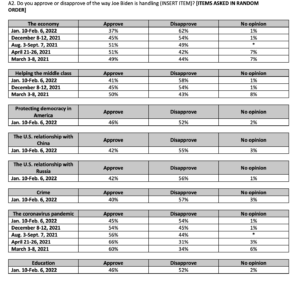 Inflation has been above 5% in the past 8 months. We see record inflation stats every single month. Therefore, inflation is a top priority:

Beyond the coronavirus, there’s little public consensus over a single top issue for the US government to tackle this year. Given a list of options relating to domestic policy, 24% called reducing inflation the most important priority, followed by voting rights (16%) and border security (15%). Fewer than 1 in 10 chose reducing violent crime, slowing climate change, addressing racial inequality, solving the labor shortage, dealing with opioid addiction or expanding access to affordable child care. Republicans’ focus coalesced around two main issues: border security (31%) and inflation (29%). Democrats were most likely to cite voting rights (28%), with 15% or fewer agreeing that any other issue was a top priority.

In other words, the social issues the progressives love so much are the least of America’s problems.

No wonder people have lost faith in the government. Then again, I wonder who had any faith in it:

But the poll suggests few have much faith in anything Washington or Biden may do this year. The share who say they felt even somewhat well represented by the federal government remained low at 32%, and only 21% of Americans said they currently had a lot of confidence in Biden’s ability to provide real leadership for the country. The share who said they had a lot of confidence in the President’s ability to work effectively with Congress has dropped by half since last March, from 32% to 15%, including a 28 percentage point drop among Democrats over that time.

Democratic governors and others at the state level have left Biden and his people in the dust by dropping mask mandates. I think some dropped the vaccine mandate, too.

Americans, in general, are sick and tired of the government forcing them to live in fear of a virus.

This is a very troubling poll. Who are the 43%?

Drunks, other substance abusers, the mentally impaired, Marxists and those on public assistance. There is some overlap.

It’s a troubling poll because the numbers are fudged.

People who cannot admit they were wrong

Which is why in 1980, it was very difficult to find anyone willing to admit they voted for Carter 4-years earlier.

COVID had a <1% fatality rate and the CDC went apeshit.
What are they doing about our 43% epidemic of brain death?

Bulldoze DC – trust me, We the People won’t miss it.

Given these numbers, somebody want to explain how Biden – or his controllers – allegedly “won” the election?

It all started when George Soros called his aide to his beside and handed him a blank check and said, “Do it.”

The thing I find REALLY suspicious was that while Trump had overflow crowds at his rallies, Biden struggled to fill up a high school gym.

That number is misleading because it includes people who believe unvaccinated should be locked in their houses at all time or put into special camps who are very obviously going to be voting straight ticket Dems.

Biden is in much better shape than his abysmal polling indicates.

“No wonder people have lost faith in the government. Then again, I wonder who had any faith in it: . . . ”

I had faith in the US government – back during the Eisenhower administration.

Yes, I am old enough – barely – to remember Ike.

The problem with (it looks like) 43% of the people is that they fail to transfer the parent lesson to government until much later or not at all. After all, in most families, at least your parents personally love you, which your government never has and never will.