“The Second Amendment is not about hunting.” 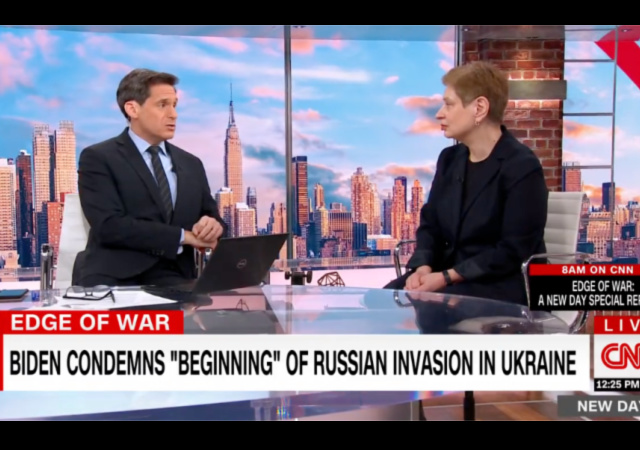 CNN guest Nina Khrushcheva, a professor of International Affairs at The New School in New York, taught CNN why we need the 2nd Amendment.

JUST NOW: "The Ukrainians will fight like hell…if every Ukrainian takes a gun, Russians don't have a prayer. I mean the military can fight, but… Ukrainians
are really ready today."@ninakhrushcheva on the Ukrainian resolve. pic.twitter.com/LacArmwNVE

It’s so weird. In the face of fascism, it’s important for civilians to have guns.

So now CNN analysts believe that the Second Amendment is necessary and that citizens should be armed. 🤔

Who would have thought? https://t.co/gYU9MuUU7J

The Ukrainian government handed out 10, 000 automatic rifles to Kyiv civilians in the past few hours.

#BREAKING: 10,000 automatic riffles have been handed out to civilians in Kyiv in the last hours- Ukrainian Interior Minister

This is one reason why we must never weaken American 2A rights. The other reason is CANADA. https://t.co/LE7uH0L7Ds

The Second Amendment is not about hunting. https://t.co/Ot4PAgKA6O

Dang, this is going to another Afghanistan Russian style…

It’s not that hard for a modern, well equipped army to defeat armed civilians. They just have to kill ALL of them.

Something no modern army has been willing to do.

Red Dawn. Worth a rewatch…

Actually, unless the rooskis level Kyiv, fighting them guerilla style can take out a lot of soldiers. Shoot and scoot, shoot and scoot. Think of the rooskis in Afghanistan or the US in Vietnam and the Middle East.

Well, per the Pareto principle getting from 80 to 90 percent will cost the ruskies dearly. There’s a learning curve, and then there’s an increasingly painful price to pay. They go together.

Never underestimate the propaganda value of providing your enemy with a famous last stand. Thermopylae? The Alamo? Pearl Harbor? Any of those ring any bells?

But then I didn’t think Putin would invade. So much for me and my crystal ball. Now, having learned from the Molotov-Ribbentrop pact I would have been prepared for Putin’s move had I been large and in charge of Ukraine. Still, I was paying too much attention to Sun Tzu and not Alfred Hitchcock.

Eventually they have to get out of those tanks and then they are vulnerable. Nobody is stupid enough to take on a standing fight against a tank when they are so easily disabled.

“Nobody is stupid enough to take on a standing fight against a tank when they are so easily disabled.”

The following is an overview of the current Combined Arms Battalion (CAB) of the U.S. Army Armored Brigade Combat Team (ABCT) as of 2016. These are the core maneuver battalions of the ABCT and are the U.S. Army’s primary mechanized infantry and armor battalions…”

One of the pitfalls, if you want it to be, is us Sailors know a little bit about how a Marine Expeditionary Brigade works. We were integrated.

One of the pitfalls of going joint after Desert Storm.

Not so sure about that. The Muj had training and the ability to practice and put rounds down range before they had to engage the Russians. Here, civilians have been only given a few hours of training before they have to fight for their lives. Have you ever trained a new shooter? The recoil and blast of even a mild 9mm pistol scares new shooters, and Ukrainian civilians are being given larger caliber rifles. Civilians need to put a couple thousand rounds down range before they are comfortable and effective.

Not only that they need to learn how to fight in groups and many other tactics. They need a huge communication system also to coordinate operations. They have had years to prepare and wasted time and money.

Its not the tanks, its the support troops, the guys in the trucks. You want to raise the costs, have them lose half their gas trucks, truck drivers. Have them have to pull into bases. Hit their enablers. Fire sniper rounds into jet engines, canopies.

cannot say for certain but would think that the ukranians are not handing-out any belt-fed weapons, rpgs, anti-tank stuff, etc. to the civilians UNLESS said civilian has had experience with same–otherwise, would expect aks, etc. being widely distributed–simple weapons to operate, load, deploy, maintain–re: recoil and blast–perhaps on the range but in the moment, at least in my experience, rarely hear/feel them at all and(especially for civilians)with each successful use, confidence/comfort grows

That’s the temptation, to compare AR rifles and tanks. But there are a lot more people than there are tanks. And the gun can be used in many more situations than a tank, in places where you can’t fit a tank.

We know from US statistics that many of the 1-2 million lives saved by citizen firearms every year are saved by just brandishing a gun. I imagine this would occur for Ukrainians as well.

Handing out the guns — Brilliant move! Done by people who had experienced both being disarmed and being under the boot of Soviet autocracy.

Do you know how to stop a tank with a rifle? You shoot up the fuel tanker following a few miles behind it.

Side lesson: borders matter. Just not our borders. But all other borders? OMG they are so important.

Brandon does not give a hoot about borders. Trump would have said something like, “One foot into Ukraine and immediate Russian removal from SWIFT banking system and Putin won’t be able to find his assets ever again.” Brandon did neither. Trump would also have told Germany, “Frau Merkel chose poorly in shutting down nuclear, like both Mario and Andrew Cuomo did in NY state.”

Yep, all that Foggy Bottom nonsense you learned at your Ivy League school is patooie, and history is once again going to teach everyone that.

Guadalcanal. I have never forgotten it. This doesn’t make me special.

You know how many times I listened to WWII vets talking about how the sh*t they put up with didn’t do them any good?

What is scary is that these civilians are only given a few hours of training and practice before they have to use the weapons in earnest against a highly trained military, likely only a few days later. Talk about setting someone up for failure. Civilians are likely going into a situation that is a losing proposition no matter how motivated the person may be. And this is not the same as guerilla warfare in other countries. Those fighters had at least more than a couple hours of training, and have actually put live rounds down range before needing to use the weapon. If you’ve ever had to teach a new shooter, you’ll know how bad this could be.

while agree in principle, sometimes you have to go with what you’ve got– as we have learned for ourselves in a few places in this world, even poorly trained civilians, in numbers, with automatic weapons and fighting for their homes/families can pose a formidable threat indeed

if they indeed mean to take the fight to the russians, then sincerely wish them well

Meh, it’s doable, not ideal. Fight defensively. Set ambush positions with aiming stakes and interlocking field of fire. Initiate the ambush with cmd detonated munitions, fire a single mag, fall back to rally point. Not ideal but doable. Sometimes making the most of what you have is the least worst option.

No matter how well trained or not, the Russian army would still have to respect the threat and tie up resources for those armed civilians. We don’t know how many of those civilians have had military training or are hunters. Having the thought that any civilian might have a weapon is going to be draining mentally on the Russian military, especially if they have specific ROEs for “unarmed” civilians.

The end of a poem by Rudyard Kipling:
…
As it will be in the future, it was at the birth of Man
There are only four things certain since Social Progress began.
That the Dog returns to his Vomit and the Sow returns to her Mire,
And the burnt Fool’s bandaged finger goes wabbling back to the Fire;

And that after this is accomplished, and the brave new world begins
When all men are paid for existing and no man must pay for his sins,
As surely as Water will wet us, as surely as Fire will burn,
The Gods of the Copybook Headings with terror and slaughter return!

Their president is leaving the country in the middle of a war to attend a conference but he will be right back.

Diplomacy to convince other countries to help Ukraine and shows confidence in war.

Age 20-27 years of age include 12-24 months of conscription with some options.
https://www.reuters.com/world/europe/ukraine-starts-drafting-reservists-aged-18-60-after-presidents-order-2022-02-23/

The citizens of Ukraine are far better trained, and will fight for their national defense, than the western libtards.

Not necessarily. Just because they have national conscription doesn’t mean they’re better trained.

Remember, the purpose of gun control is to weaken your ability to fight the government of any kind, not to protect you from criminals. Any politician who even supports gun control should immediately be kicked out of office.

Someone once said, “When you are unarmed you’re a subject.”

In Germanic societies and indeed several the ability to bear arms was symbolic of citizenship. Not being able to bear arms meant you were a slave.

The US has the worlds largest reserve Army, self-equipped and trained for combat by hunting for deer, antelope, wild boar, elk, moose and many other sporting animals. After watching the Ukraine this week even CNN should be able to figure out why we need it.

To ensure that the next Democrat in power obeys the constitution,