The school is in the Los Alamitos Unified School District, which has felt the wrath of parents in the past year due to its leftist and woke agenda. 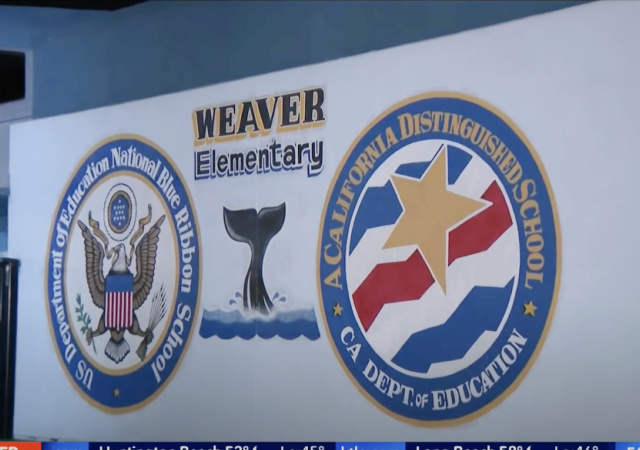 Some parents of students at Jack L. Weaver Elementary School in California are furious because biological males slept in the same room as fifth-grade girls for three nights at a science camp organized by the school.

The school is located in Los Alamitos in San Bernardino County, which is about 15 miles from Long Beach, CA. It belongs to the Los Alamitos Unified School District.

The males are non-binary and use they/them pronouns. From KTLA:

“No parent should feel the way I feel after knowing what could have happened to my daughter,” said parent Suzy Johnson.

The parents say their fifth-grade girls told them some of the biologically male counselors at Camp Pali in San Bernardino who use they/them pronouns spent three nights sleeping in cabins with the young girls.

According to California law, Camp Pali can “place staff in cabins they identify with.”

The parents cannot believe the school did not tell them about the sleeping arrangements before the girls went to the science camp.

Johnson said she “would have kept my children home.”

It turns out parents have had many problems with the Los Alamitos Unified School District’s woke agenda concerning gender identity.

In September, parents wanted to recall the Los Alamitos school board after a teacher asked Oak Middle School their preferred pronouns. From Spectrum News:

Robert Aguilar, an organizer of a parent committee to recall Los Alamitos School Board members, served three board members with “notice of intention to circulate recall petition” Tuesday night.

“[The teacher] had been asking students to share their gender identification and gender preference and not be scared to do that, but you could see it as a certain way of communicating with children,” said Aguilar to Spectrum News outside the school board meeting. “However, there are parents that believe that is not the place for a science teacher. There was some concern, ‘Why would an adult man be asking minor children under the age of 14 about their sexuality?'”

“The parents are here to regain control over what is being enforced on and taught to their children,” he added.

The parents protested the school district in 2020 “when the board considered and later approved an optional ethnic studies curriculum for the high school and social justice teaching standards for district teachers.”

Staci Muller brought up the curriculum at the September 2021 school board meeting. She later told Spectrum News, “The CRT (critical race theory), everything has gone so woke and so left that I can’t take it anymore.”

Muller pulled her two children from the school district.

She added: “I am concerned about what they are teaching, about what’s being dripped in the classroom with the racism, the CRT, the sexual stuff, everything. There’s so many things. Even a tiny comment could twist a kid’s brain.”

Adult male counselors slept in the same room with young elementary girls while at science camp.

Well, golly! This falls into the category of stuff the parents aren’t supposed to know.

science camp? I am guessing basic biology was NOT included?

Actually, I suspect that basic biology was the subject of intense study in those rooms.

Science SEZZZ! I’m having sex with your daughter.

Seriously, when are people going to wake up to the fact that this whole LGBTQ+ blah blah blah Trans blah blah crap is just a cover for deviants to get away with their deviancy.

Pedophilia is now a gender, protected in the same class as all the other LGBTQ=== invented genders. You’re the outlier now, you sick f***, who thinks there’s something normal about an adult man and adult woman being attracted to each other.

This message brought to you by your local Gay Pride Parade and the New Normal.

This sounds like a Yakov Smirnoff routine.
In Russia, you follow the science. In America, the science follows you!

Having a tough time feeling sorry for the parents.

They not only allowed this to happen, they supported it by allowing the conditions that made the deviants think it was acceptable. You can bet the parents signed permission slips for this fiasco without asking key questions.

Minors are supposed to have guardians because they are not mature or experienced enough to make their own decisions. These guardians failed miserably, quite possibly because they put their politics before their common sense.

Los Alamitos and Weaver Elementary are in Orange County. Camp Pali is in San Bernadino County.

he thinks maybe he wants to amputate his penis?

Not this bunch, they don’t “identify” as female, but as “non-binary”, which means… Well, nothing particularly concrete, except that they want a hip title and deferential treatment.

Amputate? Well, why not grant his wish?

I’m waiting to hear that gender is just a social construct and that night the biological male teachers were identifying as women.

Sex is genetic: male and female. Gender is sex-correlated attributes (e.g. sexual orientation): masculine and feminine, respectively. Dress, hairstyle, etc. are social convention, typically to normalize a favorable juxtaposition of the sexes. Women and men are equal in rights and complementary in Nature/nature. Trans is a state or process of divergence from normal.

That said, once you sacrifice [virginal] human life for social, redistributive, clinical, and fair weather causes, can you go back?

Roe, Roe, Roe your baby, granny, self… down the river Styx.

That is bull hockey pucks. This deliberate twisting of sex/gender is nothing more than a way for predators to confuse people into not recognizing them for what they are: sexual predators.

So? A little dirty talk, a little fondling, a little sodomy – and maybe and changes of emails. Hell, even a pregnancy and an abortion or two.

Liberalism is a mental disorder. Get crazy and stupid people out of high office.

Note to Putin: if you nuke D.C., we’ll forgive you for the Ukraine.

Follow the science you deplorable rubes; just not outdated concepts of biology….and get back outside where you belong driving trucks, drilling oil, building roads, military service…..how dare you question your betters.

Fauci said he tried following the science but it didn’t take him where he wanted to go. So he just made shit up as he went along and everybody believed him.

Not quite everybody, many of us still have unanswered questions and very basic questions at that such as the distribution of severity by demographic, age and health factors …which the CDC has the data on but is withholding, presumably for our own good as our betters surely know what’s good for us.

Fauci is a criminal. It’s that simple.

According to what I’ve heard since BSA has adopted their Youth Protection Program- accusations of any kind of abuse have dropped to near zero. You’ll never get to zero. But his violates all aspects of the training- which anyone can take, regardless of Scouting affiliation. If you have a child and they’re in public school or ANY youth organization- you should take it. If the school or youth organization violates any of the principles in the training – you should call them on it. The biggest change from when I was a Scout in the 1960s- two deep leadership. No child should ever be alone with an adult in Scouting who is not their parent. Period. Not even if they’re some other relation like uncle or cousin. And there should always be two registered adult leaders at any Scout gathering. One on one training with adult leaders was common in the 1960.

In order to really criticize their actions, you have to have some actual guidelines they’ve strayed from. As much as it should count, “They should have used some common sense and not done that!” doesn’t count.

Those complaining parents can expect an investigation by Merrick Garland.

‘The parents cannot believe the school did not tell them … Johnson said she “would have kept my children home.”’

That is why you didn’t know.

They are more concerned with not hurting the feelings of adults than the physical safety of children.
That tells you what they are.

after knowing what could have happened to my daughter

Could have happened, yet unsurprisingly didn’t.

All men must be suspected of being rapists and pedophiles, and treated as the disgusting lepers they are.

All men? For raving post modern ‘independent’ feminism first, you go girl, women can do anything a man can do and probably better, types of people sure; that’s their attitude which they won’t shut up about.

In this case we have parents rationally reacting to info that they were given after the fact. Adult males who have decided that, for now at least, they identify as female and sharing a camp style cabin with their elementary school age daughters. Ten years ago someone who announced that they were another gender or more recently another species would have been properly classified as mentally ill. Today the proponents are shocked anyone notices.

So the girls got a little more “education” in biology and biological bodily processes, i.e., stimuli, etc. Call it “sextracurricular”.

The last time I checked Los Alamitos was in Orange County. Perhaps you should hire some real fact checkers for your articles.

Los Alamitos is in Orange County.
The school board president told parents “F- Off” into a live mike at a school board meeting