The Asheville scholarship program no longer will be able to discriminate on the basis of race or other protected categories. 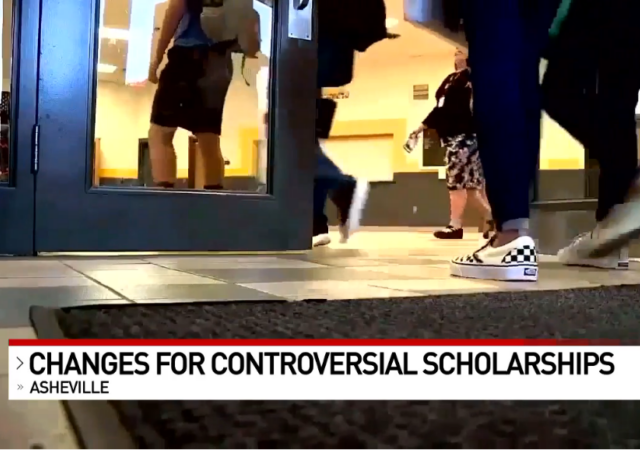 On October 20, 2021, we reported on a lawsuit filed by Judicial Watch and Legal Insurrection Foundation challenging a public school scholarship program in Asheville, NC, that discriminated on the basis of race, as only black students were eligible.

A lawsuit now has been filed in federal court in North Carolina challenging a racially discriminatory government scholarship fund in Asheville, NC. Lead attorneys in the case are James Peterson, Esq. of Judicial Watch, and Asheville, NC, Attorney Ruth C. Smith, Esq. Ameer Benno, Esq. of Legal Insurrection Foundation is serving as Of Counsel in the case, lending his experience as a civil rights lawyer to the effort.

14. Plaintiff’s Student Members are Asheville High School students and, if eligible, would apply for the City of Asheville Scholarship.

15. Plaintiff’s Student Members are ineligible because they are not Black.

The case has now settled, with Asheville agreeing to end its racially discriminatory practices. Judicial Watch issued a press release, which reads in part:

Judicial Watch announced today that the City of Asheville, North Carolina settled a Judicial Watch federal civil rights lawsuit, after agreeing to remove all racially discriminatory provisions in a City-funded scholarship program. Additionally, the city also agreed to remove racially discriminatory eligibility provisions in a related program that provides grants to educators. The City Council approved the settlement on January 11….

To settle the civil rights lawsuit, on January 11, 2022, Asheville’s City Council approved a resolution that removes the racial criteria for the scholarship:

[T]he scholarship will give preference to applicants whose household members, including parents and/or guardians have a high school education or less, these applicants representing “first generation” college students.

The City Council also removed racially discriminatory language for a scholarship program for educators and staff of Asheville City Schools.

The scholarship agreements were also amended to prohibit discrimination based on race and other categories.

“Our clients, a group of Asheville residents, including high school students, courageously challenged this blatantly discriminatory and illegal scholarship program in federal court. Thankfully, the City of Asheville did the right thing in quickly ending these indefensible race-based scholarship programs,” said Judicial Watch President Tom Fitton. “This federal lawsuit and the resulting remarkable settlement should serve as a wakeup call to those activists and allied politicians pushing the extremist leftist agenda to segregate and discriminate based on race.”

The Legal Insurrection Foundation partnered with Judicial Watch in the lawsuit.

Here is some key wording from the Settlement Agreement:

1. Amendment of Donation Agreements Paragraph 1. The City and ACSF agree that within five (5) days of the execution of this Agreement, they will amend the Donation Agreements (“Agreement Amendments”), such amendments to be effective as of the date of this Settlement Agreement, to amend Paragraph 1 of each of the Donation Agreements as follows: Paragraph 1 shall be amended to replace the second and third sentences of Paragraph 1 with the following sentences: “The first is for a scholarship to be awarded in perpetuity to high school students within Asheville City Schools, based on the following criteria: In addition to the criteria set forth for all ACSF scholarships, the scholarship will give preference to applicants whose household members, including parents and/or guardians have a high school education or less, these applicants representing “first generation” college students. Additionally preference will be given to applicants who are committed to pursuing a career in education. The second is for a scholarship fund for educators and staff of Asheville City Schools who are pursuing their next level of education and/or certification, with a preference for applicants who are or were “first generation” college students.”

2. Amendment of Donation Agreements Paragraph 10. Additionally, the City and ACSF agree that the Agreement Amendments will amend Paragraph 10 of the Donation Agreements add the following text: “ACSF shall be prohibited from discriminating based on any of the following characteristics of any applicant for award of the scholarships that are the subject of this Donation Agreement, whether the scholarship be for students of Asheville High School or employees of Asheville City Schools: race, natural hair or hairstyles, ethnicity, creed, color, sex, sexual orientation, gender identity or expression, national origin or ancestry, marital or familiar status, pregnancy, veteran status, religious belief or non-belief, age or disability.”

Good! Now, what are the odds that they’ll actually obey the new rules?

Maybe Judicial Watch should institute the “sanctioned” progressive quota measure. Each year they could evaluate the scholarships and calculate whether the “race equity” matches the “appropriate” value for the locale. That is, are they giving a proportionate or disproportionate number of scholarships based the % of that race within the “community”? Is it therefore “fair?” I think I captured some of the key, sanctioned language…..

Did we get our legal costs from them? Their hand should be slapped so others don’t feel free to try such things. But either way, a good success!

So is there any inkling of personal liability for the public officials who sought to use their official positions to institute a blatantly unconstitutional scheme to actively discriminate on the basis of race? Until there are personal consequences this sort of thing will be whack a mole.

“The City Council stated that it expected the funds would be used “in such a way as to provide the public benefit of advancing racial equity within the community.”

When you state the issue with weasel-words like “equity,” it’s so easy to cloud men’s minds.
Mass hypnosis? Without a doubt.
Don’t think about the big picture. It says “equity” right here. Just sign.

I agree. They know not what they do. (At least some of them.)

“a public school scholarship program in Asheville, NC, that discriminated on the basis of race, as only black students were eligible.”

80 years of Americans nattering, “How could the German public be so blind as not to see what a monster Hitler was?”

40 years of American liberals willfully not seeing that racist programs are obviously racist… and getting hostile with you when you point it out.

Another way to look at this is that the government schools have failed black children so badly that people try to help the children by doing foolish things like this instead of addressing the cause of the problem.

Black parents have failed their children so bad that there is little anyone can do to salvage them. Schools can only build upon a foundation which parents should have built. I wish I could see a path to fix this.

The parents failing their kids, as far as education is concerned, is not caused by too much melanin. To suggest that, even if tangentially, is to be a Kendi-acolyte

Ha! Ha! More people, perhaps boys, perhaps girls, full stop, and there’s nothing they can do about it, short of ending Every Child Left Behind policies, and the government ending its progressive prices policies.

Too many People of Yellow. Add some Orange, bad. Perhaps Red? Brown? With a masculine and feminine [gender] twist. And don’t forget to get an equitable social class spread for the inevitable opinion… fact check.

It’s insane that the vile Dhimmi-crats believe they can get away with promulgating such brazen and overt race discrimination, in the name of their so-called “social justice” and “equity” agendas. Until I recall that the road was paved for this idiocy and inequity when SCOTUS indefensibly blessed the use of race preferences in university/law school admissions (naively, with the supposed constraint that race was to be only one of an alleged multitude of admissions factors considered during a candidate evaluation — a manifestly unenforceable framework that predictably has been totally dispensed with by university admissions offices); and, when federal and local governments began awarding preferences in contracting to “minority” and women-owned businesses, etc.

The current, brazen race discrimination in aid programs that we’re seeing at the federal and state levels is the predictable and direct result of decades of this “affirmative action” idiocy.

Congratulations … punch back twice as hard. It’s a nice win.

Discrimination will shift to subtler forms, but still it puts them on notice they can’t be so overt. And gets the case and win on the case record and puts others on notice.

How can an educational deficiency problem be fixed when the native IQ is less than 80? These children require assistance to enter occupations they are capable of performing.

Is an applicant whose divorced parents have joint custody but live apart, residing primarily with her high school dropout mother but spending alternate weekends and school vacations in the home of her father who earned his JD at Cornell eligible for the scholarship? What about if an older sibling has moved back into the mother’s home following college graduation?

Should an orphaned high school senior raised by and living in the home of two parents with doctoral degrees until midway through his junior year when his parents were both killed in a car crash, and now living with his grandmother who never attended college, bother to apply for this scholarship?

I could continue, but the point is clear.

We have seen “equity” under the law in Minnesota courts.

Professor Jacobson and Legal Insurrection won praise on the January 13 Commentary Magazine podcast. This legal action and its theme served as the subject of much of the podcast. I recommend it.

After 11 years there, I fled Asheville in 2018. It’s filled with crazy leftists.

Last I saw the Asheville City Council is all female. (I am longer in that county so have no need to follow … but how can that be ” equitable?”)

And not so long ago ( last year?) the City Council council voted to pay reparations to blacks. Now, we have some black (dare I say it?) friends … and a relative … from Asheville. I was wondering how they are going to do this..
Does one have to be born in Asheville? Lived the re altogether — how long? What if they moved?

Asheville is a large blue dot in the middle of the mountains. Unfortunately getting Callifornicated.