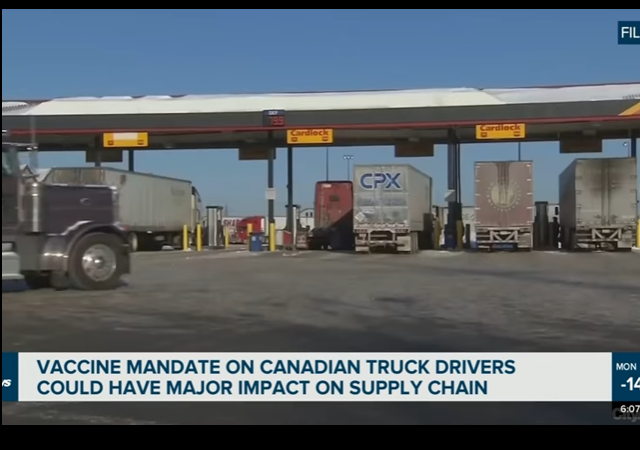 The Department of Homeland Security is now implementing rules that prevent noncitizen essential travelers crossing the border unless they are fully vaccinated.

The rules include truckers from Canada and Mexico.

Starting Jan. 22, travelers entering the United States at land ports of entry — notably along the Canadian and Mexican borders — and ferry points who are not U.S. citizens must be fully vaccinated against COVID-19, the Department of Homeland Security announced.

The requirement, which takes effect at 12 a.m. ET that day, does not apply to U.S. drivers. However, Canada and Mexico have similar regulations in place that do impact U.S. drivers — including truck drivers — who make cross-border runs.

The DHS announcement was released late on Jan. 20, and was one that the trucking industry had been anticipating, noted American Trucking Associations Chief Economist Bob Costello.

If the vaccines worked on a more permanent basis, perhaps there may be a case for the rule. However, their efficacy wanes over time and many double-vaccinated and boosted individuals have contracted covid.

Furthermore, the risk of adding another complication to an already over-strained supply chain cannot be over-stated.

Antonio Cachazo, Regional Director for International Transportation Services, indicates the potential severity of the situation that may impact supplies of many important items, such as medical supplies.

Cachazo said 100 percent of the Mexican drivers they work with are following the new requirements, but he says companies in Canada could possibly report issues.

“I have heard that Canadian drivers there’s some reluctancy and I heard a number something like 20% are resistant,” added Cachazo.

Cachazo said if many drivers leave because of the new requirements, it will continue to rattle the already struggling supply chain issues.

He says it could possibly interrupt the transportation of electronics, car parts medical supplies.

According to the U.S. Trade Representative, some of those items are the country’s top imports.

“From the point of view of the supply chain– we’re very sensitive to any regulation that impede, or be an obstacle to the free flow of goods, which is heavily taxed by not having enough capacity already,” said Cachazo.

Meanwhile, in British Columbia, Canada, hundreds of truckers are set to roll out of Metro Vancouver Sunday on a cross-country convoy to the nation’s capital of Ottawa to protest the nation’s vaccine mandate for truck drivers.

Whoa! A Canadian trucker part of the freedom convoy en-route to protest vaccine mandates shares a video of supporters cheering him and others on in Langley, British Columbia. pic.twitter.com/we6cyzauHB

Big rigs have departed northern B.C. for the drive south, where they will gather at the Nordel weigh scale in Delta early Sunday before the trek to Ottawa, the destination for the so-called Convoy for Freedom 2022.

“We’ll all be in radio contact — trucks leave first, everyone else second,” said Sean Tiessen, a truck driver from Grand Forks. “There’ll be lots of honking, lots of garnering support and making noise and spreading the love.”

Tiessen, who has been driving rigs for 23 years, will be behind the wheel of his own vehicle because he was unable to start his winter job hauling lumber across the border due to the vaccine requirement.

“I can work elsewhere in the industry that doesn’t involve crossing the border, but I’m not taking it anymore,” he said.

Freedom trucker convoy making its way through Smithers, BC, Canada on its way to Ottawa to protest mandates next weekend. pic.twitter.com/HRbICfTYjV

The situation is so serious that the premier of Canada’s Alberta province called on the Canadian government to pause a COVID-19 vaccine mandate for cross-border truckers.

The mandate, imposed by Ottawa to help curb the spread of the coronavirus, has cost Canadian trucking companies about 10% of their international drivers, six top executives said this week. They said they are hiking wages to lure new operators during the worst labor shortage they have experienced.

Alberta Premier Jason Kenney, at a news conference in Calgary, urged the government to extend an exemption that had been in place for truckers since the start of the pandemic.

One must now ask, are the consequences of these choices unintentional, or are they anticipated and welcomed by the politicians and bureaucrats who made them?

They mandate the vaccine for healthcare workers.

They mandate the vaccine for truckers.

And it’s all by design.

May God bless them and those who stand for freedom!
There is a gofundme somewhere for these guys (or was).

Of course it’s intentional. It’s been done before. They need you all poor and government dependent.
Look at Venezuela. Same playbook.

Fire nurses during a Pandemic.

I am putting this here just for information..

Here, the amount is amazing.. truly…

Just for comparison, no Canadian political party has ever raised $1.8M in private donations in a single week.

Our media is full-on Pravda 24/7 and refuses to cover this. Or they lie. CBC is reporting that the convoy is protesting road conditions in BC.

Sure, until GoFundMe cancels their campaign.

Biden couldn’t inflicit more damage to the free world if he was letting Obama call the shots.

Well, Obama IS calling the shots. And being Obama is on Soros’ knee, George Soros is running the US government.

I’d venture the hypothesis that Obama is on more than Soros’ ‘knee’. 😀 😀 😀

Let’s go Brandon. Anyone who thinks the current president is doing a good job is a brain-dead moron.

When the admin is already facing accusations and various theories (maybe correct/maybe not) to explain their behavior it would be a good idea for them not to feed into that by creating more fodder. If the supply chain already has problems does it make sense to reduce the number of drivers via a vax mandate? This is either stunning stupidity or next level conspiracy.

This is either stunning stupidity or next level conspiracy.

Conspiracy? Hardly, it’s out in full view of the public. They no longer care to hide what they’re doing, any more than they cared if you knew they stole the election.

Perhaps it’s as simple as hiding in plain sight. Ports clogged up? Biden admin announces 24/7 operations, pushes ships awaiting to dock further off shore and declares it a success. Mandates and shutdowns had lingering effects on supply chain?
Rising fuel costs because they tossed over energy independence to the point of begging the Saudis and Russians to pump and deliver more oil? Simple forge ahead with vax mandate for truckers then blame them for current inflation and scarcity.

That’s just one possible interpretation of this as something other than abject stupidity.

If you ever wondered what it would be like to live during a communist takeover,…..

You only need to look at Australia. They’re way ahead of us.

Thank God we can trust Transportation Secretary Butt Edge Edge to clear this up. He did such a great job clearing up the LA Port log jam to save Christmas, maybe he can perform his magic again.

It’s a lot harder to park a truck over the horizon.

oh this will be fabulous.

Magically the Mexicans have all the right paperwork. I’m sure it’s all legit.

Yeah- I’ve seen those south of the border truct drivers rolling through I-5..in the far north. sure my name is “Juan” and sure this is my license and sure I’ve got my CDL which is why I drive it like a 13 year old girl whose never been behind the wheel of anything before.

How about applying rules to undocumented people coming over the sourhern border? Brandon has certainly outperformed every president before in the amount of damage he has inflicted on the US.

One of my good friends, her husband is a trucker. He drives a fairly short route, Ogden Utah to somewhere in Wyoming, is home every weekend and sometimes a weeknight in Ogden when they go to dinner (they live an hour or so north of that). He works for a small outfit, him, the boss, and the boss’s son or brother all driving. He does have, however, a hazardous materials certificate, which in my understanding, makes him a rare trucker indeed.
There is NO WAY he will ever get the vax. They would not even mask, even going out of their way to find stores that did not require it. They have plans to bug-out if it comes to forcing anything.
This is an anecdotal story, one man, but if there are more like him – this country will be brought to its knees if the truckers quit. And funny thing – guys aren’t truckers cuz they can’t do anything else – the truckers I have known have MANY skills that would permit them to drop out of the system and still survive.

also there is this: https://www.bloomberg.com/news/articles/2022-01-19/fruit-and-veggie-outages-in-canada-get-worse-with-trucker-shortages

Truckers should just declare they’re illegal aliens. No need for papers or vax. Just drive on through.

It just occurred to me that the internet and lots of critical infrastructure will curiously go down in the same hour Putin invades Ukraine.