Media promptly smears it as a panel of “vaccine skeptics and promoters of unproven early treatments.” 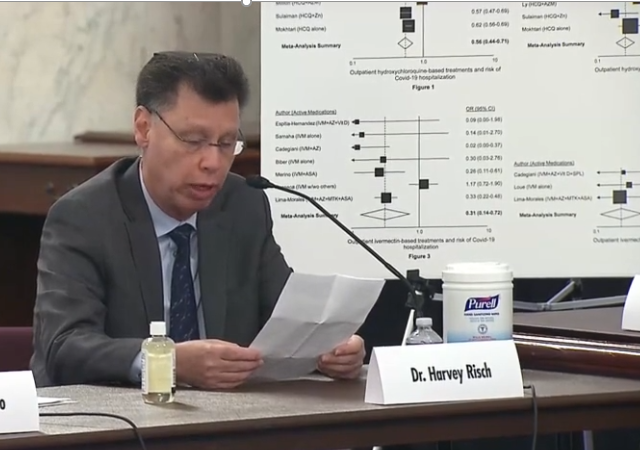 This discussion on the special “Second Opinion” panel that Senator Ron Johnson (R-WI) hosted is a perfect example of one of the root problems in the American response to the covid pandemic: The press.

Johnson organized world-renowned doctors and medical experts to offer a different perspective on the pandemic: global pandemic response, the current state of knowledge of early and hospital treatment, vaccine efficacy and safety, what went right, what went wrong, what should be done now, and what needs to be addressed long term. The panel discussion was held this Monday, and the 5-hour discussion is via the link HERE.

I strongly encourage anyone interested in the scientific challenges to the pandemic response that have been suppressed under the guise of “misinformation” to watch as much as they can, if not all, of qualified medical experts who are disturbed by the approaches developed by Dr. Anthony Fauci and the rest of the federal health bureaucracy.

McCullough created the 4 Pillars of Pandemic Response, which are:

One of the most disturbing aspects of this panel discussion is hearing about how one panelist, Dr. Ryan Cole, was hearing about how he guided an obese patient suffering from severe covid away from the emergency room to the pharmacist and an array of drugs to reduce viral replication and ease inflammation.  For his efforts of trying to make the public aware of treatment options, he was hounded by the media and described as controversial.

Essentially, the federal bureaucratic pandemic response skipped Pillar 2, briefly focused on Pillar 3, and went all in and Pillar 4.

Dr. Harvey Rich reviewed all the problems and flaws associated with the studies that “proved” hydroxychloroquine was an ineffective early treatment and noted that the press failed to mention the retraction used to deem support for the treatment as “misinformation”. The media hid 10 other studies that show there is a 50% risk reduction in hospitalization and a 75% risk reduction in death when hydroxychloroquine is used in early treatment.

Upon learning of this panel, I wanted to see news reports on this panel.  The only one I found described that the panel consisted of “vaccine skeptics and promoters of unproven early treatments”. The analysis included this chestnut:

Among those scheduled to speak at both events is Robert Malone, an infectious disease researcher who has claimed to be an “inventor” of mRNA vaccines and has been accused of spreading misinformation about the vaccines that got him booted off Twitter.

Also expected to speak at both events is Texas cardiologist Peter McCullough, who has asserted COVID-19 vaccines are unsafe; Aaron Kheriaty, a University of California-Irvine School of Medicine physician who was fired for refusing to get the COVID-19 vaccine; and Wisconsin physician Pierre Kory, who has promoted the use of ivermectin as an early treatment for COVID-19.

Dr. Pierre Kory is the former Chief of the Critical Care Service and Medical Director of the Trauma and Life Support Center at the University of Wisconsin and an expert in the use of “horse dewormer” ivermectin. He details the studies across the globe, including the success of its use in a Brazilian city and Uttar Pradesh, India (news of which has been hidden or dismissed by the press).

In a nutshell, Fauci, Big Bureaucracy, and Big Pharma have declared war on repurposed drugs. The “misinformation” weapon the press has used so effectively is likely responsible for the deaths of thousands.

There is evidence that the “misinformation” campaign is not as working as it once did. For example, New Hampshire residents may soon be able to receive ivermectin from pharmacies without first getting a prescription or approval from a doctor.

Proposed legislation titled House Bill 1022 would allow pharmacists to dispense the drug, which some believe can treat COVID-19 even though it lacks approval for such use from the U.S. Food and Drug Administration (FDA), by means of standing orders.

Under the law, pharmacists would be able to “dispense ivermectin under the delegated prescriptive authority of the physician or APRN (Advanced Practice Registered Nurses), specify a mechanism to document screening performed and the prescription in the patient’s medical record, and include a plan for evaluating and treating adverse events,” according to the bill.

I would like to note that Johnson invited Fauci, Centers for Disease Control and Prevention Director Rochelle P. Walensky, Dr. Albert Bourla, Chairman and Chief Executive Officer of Pfizer, and other bureaucrats and pharma executives to the panel. None elected to come.

Please watch as much as you can, and encourage others to do so as well.

The summary will conclude that having proceeded with the normal pandemic protocols would have been much more effective that flipping them on their head and doing the opposite. It was just a bad flu season hijacked by the globalists to strip us of our constitutional freedoms. Maybe this will persuade them to give it up. Our science is better than their “science”.

We ain’t seen nothing yet. Now that they’ve worked the kinks out of the plan, they’re going to tackle ‘climate crisis’ next.

I’m rather amazed mainstream doesn’t have an actual pillar to literally burn heretics. It’s early yet. The bottom is a long way down.

Aside from planned parent/hood in several Democrat districts, “healthy at any weight” and other comorbidities, Covid-18, 19, 20, 21, and 22 are seasonal illnesses with nutritional supplements and maybe early, effective, safe treatments in 99%+ of people… persons. That said, given the diversity of viruses in color and number, people who cling to masks, distancing, therapeutic “vaccines” and other measures are playing with a double-edged scalpel that they will never legitimately be able to relinquish… their new normal.

Thank you to @leslieeastman. I was looking for this link and couldn’t find it on Rumble. All good now and been watching for 2 hours already.

They are only “unproven” in the sense that a full-scale double-blind trial hasn’t been done. That isn’t a reasonable definition of “unproven”. More to the point, the way to prove them is to use them, but that isn’t being permitted. It’s absurd to claim something doesn’t work while simultaneously forbidding the testing required to prove it does.

Henry, if you are reading this, I do think your tl;dr summary of my long winded data post was essentially correct. Sorry I did not respond sooner but I got really busy and that thread has since died (if you don’t remember what I’m talking about, my bad).

The way I see it the older population has a strong conservative base. Also, several U.S. studies have indicated that whites who vote Republican tend have higher rates of obesity than whites who vote Democrat (not necessarily true for other races). There are possible reasons other than political affiliation, including geographic/cultural background, but that’s the trend seen repeatedly.

So, I think it is prudent to advocate for SOME measures because I think that the vulnerable are bound to vote 100% Democrat if they die for any reason, COVID or otherwise. However, I am strongly against forcing those measures.

I honestly think conservatives would be much more electively vaccinated by choice if Biden and his loyal media minions weren’t so flip floppy, being first against and strongly in favor now that they are in power (when they weren’t while Trump was still in office).

So what name will they call the version of Wuhan Flu that will suddenly appear in October, so severe that slow creepy Joe will be “forced” to cancel all in person voting and mandate all federal elections to take place via “mail-in” ballots. And amazingly they will have them all counted and the DemonRat winners announced in record time?

As Joe Stalin famously said (paraphrased) : “it’s not about who votes, it’s about who counts the votes.”

My Husband and I are both 78 and UNVACCINATED! We decided not to get the mRNA GeneAltering Vaccine right away. Being a Lab Animal for an Experimental Drug is something we refuse to do. We watched Senator Jordon’s round table with Real Scientists, Virologists, Epidemiologist and Nurses we were flabbergasted….and very happy we made the correct decision and Declined the Jab!