Palestinian Media Watch: “After turning Jesus into a Palestinian, the PA wanted to honor him the only way they know how: They declared him … an Islamic Martyr.” 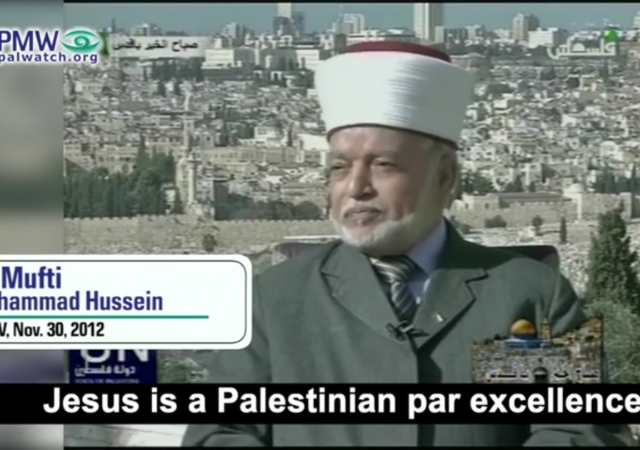 Not satisfied merely with laying false claim on the legacy of Jesus, Palestinian propaganda is now portraying Christ as an Islamic terrorist, a recent report published by a media watchdog shows.

“After turning Jesus into a Palestinian, the PA [PLO-run Palestinian Authority] wanted to honor him the only way they know how: They declared him fighter (i.e., a terrorist) and an Islamic Martyr – the people who Palestinians see as the “most honorable”,” the Palestinian Media Watch report published on Friday noted.

The Palestinian Media Watch detailed of the latest Palestinian attempt to defile the legacy of Jesus for their jihad propaganda:

The PA uses many euphemisms and terms to refer to terrorists, and they are applying two of them to Jesus. The first is Fida’i, literally “self-sacrificing fighter.” For example, terrorist Ashraf Na’alwa, who brought a rifle to work, tied up a young mother of a 15-month-old, and then murdered her and another coworker, was called by Fatah: “The heroic Fida’i.” Fatah official Rawhi Fattouh applied this status to Jesus: “Jesus the first Palestinian Fida’i.”

The second term is Shahid – Islamic “Martyr” – the word the PA uses for every terrorist killed during his/her attack, including suicide bombers. Senior Fatah leader Tawfiq Tirawi applied both terms to Jesus: “The first Fida’i and the first Martyr, the messiah Jesus.”

Ironically, the PA and Fatah do not intend to insult Jesus’ memory or Christian tradition by turning Jesus into a terrorist. Palestinian leaders actually believe that terrorists, murderers of Israelis, and Islamic “Martyrs”, are the “most honorable.” PA Chairman Mahmoud Abbas praises them regularly and puts them on the highest pedestal: “We view the Martyrs and prisoners (i.e., terrorists) as stars in the sky of the Palestinian people and they have priority in everything.” [Official PA TV, July 24, 2018]

So by calling Jesus a Palestinian terrorist the PA/Fatah actually intend to honor him.

Palestinian activists and terrorist groups have long pursued the strategy of misappropriating Jesus for their antisemitic propaganda. Linda Sarsour, who is among the leading Muslim activists peddling this falsehood in the U.S., uses this narrative to build an alliance between the extremist BLM movement and her anti-Israel campaign. “Jesus was Palestinian of Nazareth and is described in the Quran as being brown copper skinned with wooly hair,” Sarsour tweeted in 2019.

The activists, like Sarsour, who peddle the ‘Jesus-was-a-Palestinian’ narrative also appear to have a great admiration for Palestinian terrorists. As the New York Post noted, Sarsour “has also heaped praise on Rasmea Odeh, a convicted Palestinian terrorist who helped blow up a Jerusalem supermarket in 1970, killing two people.”

While the Palestinian terrorist groups misappropriate the name of Christ, Palestinian Christians have been persecuted, threatened, and forced to flee. “When the Ottoman era ended in 1922, Christians were 11 percent of the population of Palestine—about 70,000 people. According to the 2017 census by the Palestinian Authority (PA), they now number 47,000—barely 1 percent,” the U.S. magazine Christianity Today noted in its August 2020 issue.

During Hamas’s 14-year reign of terror, the Christian population in Gaza dropped by more than 75 percent; from 4,200 in 2007 to the current figure of nearly 1,000. The remaining Christian minority in Gaza faces repeated terrorist attacks on its members and institutions.

Not surprised, in couple books I have on Islam history Mo it’s explained tried to take people and events from previous religions.

Right, because the message He preached was all about hating Jews and enslaving women.

Is there nothing Arabs can’t hijack? I’m f*** all out of airplanes.

I actually got downvoted for not liking an Arab terrorist. Twice. AOC must not visit this site because Ilhan Omar and Rashida Tlaib sure as hell do.

Maybe this goes here. My review of the Imantel RT90 flashlight.

It was advertised as something of a weapon. I wasn’t at first impressed because I couldn’t turn it on. Then I did and, OK, it’s a flashlight. Then I held down the “on:” button for more than 2 seconds and holy hades, it’s a weapon. Maybe in 24 hours I’ll get my vision back.

You know when you look into a flashbulb? I’m only doing this because learned braille.

Obviously I’m full of entire s*** but maybe not entirely. Holy **** if I squint out of one I can still kind of see.

I didn’t do exactly the Allen Baldwin, let me look down the barrel…

You know how you shut both eyes and you still see the flashbulb?

They can call him “self-sacrificing “ and “martyr” all they want.

Ask them to call him Son of God and that’s a different story.

They definitely don’t believe He was crucified (let alone resurrected).

The way I understand it is that islam acknowledges the existence of Jesus Christ but he isn’t anything special. Just another “prophet” in a long line of prophets leading to Mohammad and the “perfected” religion known as islam that the pedophile invented.

Just tell them Jesus > Mohammed and they will get triggered all over again.

PLO claiming that someone who lived hundreds of years before before islam was invented is an islamic martyr is like Kalashnikov claiming David killed Goliath with an AK47.

It was just a common AR (Arabian Rock).

I would have thought they would frame Goliath as a humber person deceived , murdered and then mutilated by a Jew.

It’s no mere strategy, it’s bog-standard Islamic teaching. Jesus, called Issa in the Quran, was in fact Muslim, not Christian. Islam preceded Christianity, don’t you know. The “People of the Book” (Jews and Christians) corrupted Islam. In the End Times Issa will be resurrected and call the Christians to Islam. Any who refuse will be slain by him (“break the cross”).

It’s the same hat style worn by Hitler’s imam. You can see it in this famous photo,

btw that Muzzie dude was the uncle of Yasser Arafat.

inri?–even the romans, who predate mohammed by a few years, referred to christ as “the king of the jews”–how could He possibly be considered a muslim anything?–pretentious fools

Islam has long had Jesus as one of their so-called prophets. This isn’t new, and it’s been generally accepted for centuries that the alleged god of the Jewish faith is the same one as the Christian and Islamic faiths, so why wouldn’t they all recognise the same chap that claimed to represent that god?

Their claim of martyrdom matches exactly that of Christian teachings. “He died for us” and all that blarney.

Sorry but I can’t get terribly exercised about Palestine echoing centuries of Christian dogma.

It’s a common misconception that Almighty God YHWH, The Creator as described in the Bible, is the same as Allah, the Arab moon god. They are not the same person. The Muslims want us to think they are, simply because they know their god is just a demigod – if he even exists.
.

Sure. Your god is special. Unlike theirs.

By the account of the Quran and Muhammad, it’s impossible that Allah is the God of the Old Testament. Or that Muhammad is a prophet.

Who spoke to Moses? According to the Quran,

Calling Jesus the ‘first self-sacrificing fighter’ and ‘first [Islamic] Martyr,” is of course, blasphemy in denying that Jesus, was God in the flesh, who willingly died for our sins and rose again.