The BBC tried to smear young Jewish victims as ‘Islamophobes’ who were attacked by a gang in London’s Oxford Street during Hannukah celebrations. 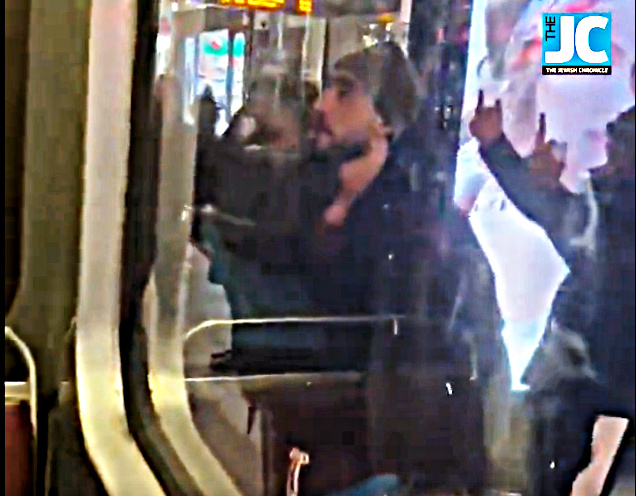 Newly-emerged evidence seems to have debunked the British broadcaster BBC’s claim that a group of Jewish teenagers uttered an “anti-Muslim slur” as they were being attacked by a gang in an antisemitic incident near central London in November of last year.

An independent investigation conducted by eminent forensic experts and linguists “appears to undermine the BBC’s claim that an anti-Muslim slur was uttered by a victim of the antisemitic … bus attack on Oxford Street,” British weekly The Jewish Chronicle reported this week.

The incident took place in late November, when a group of Jewish teenagers was attacked by a gang of men in London. The Jewish teens, who were on their way to the Trafalgar Square to witness the lighting of London’s biggest menorah that marks the first night of the Jewish festival Hanukkah, were threatened and harassed by a group of violent men. A video circulating on the web “shows a group of men throwing Nazi salutes, giving the middle finger, spitting on the passengers and then slamming their fists on the bus door and windows,” the Jerusalem Post reported.

Media reports of the incident did not mention the identity of the culprits, but news coverage suggested that they were of Arab or Middle Eastern origin.

The BBC’s coverage of the incident painted the young Jewish victims as racists and ‘Islamophobes.’ In the initial report on the attack published on December 2, the BBC claimed that “racial slurs about Muslims could be heard inside the bus.”

The expert panel that analyzed the footage found no evidence of any anti-Muslim slurs being uttered by the Jewish teens or anyone else at the scene. “I was unable to detect any anti-Muslim slur in particular, at any point in the footage, either in English or in Hebrew,” said one of the prominent scholars who contributed to the report.

The Jewish Chronicle (JC) reported findings of the independent experts:

The JC can reveal damning new evidence which appears to undermine the BBC’s claim that an anti-Muslim slur was uttered by a victim of the antisemitic Chanukah bus attack on Oxford Street.

The Charedi students whose panicked voices can be heard in a video clip of the attack have categorically rejected the BBC’s allegation that they used any racist phrase whatsoever.

And a dossier of exhaustive analysis by forensic audio experts and a distinguished, independent linguist, commissioned by the Board of Deputies, appears to confirm their testimony.

The revelations heap further pressure on the BBC to justify its claims to the Jewish youngsters. So far it has refused to apologise, causing outrage.

Rabbi Schneur Glitzenshtein, who organised the bus trip, told the JC that he had personally spoken to those whose voices are heard in the video. “All they were doing was trying to protect each other,” he said. “That insult did not happen.”

Separately, the Board of Deputies commissioned digital experts DigFind and D3 Forensics, who used audio technology to slow down and clean up the recording so that each syllable of the phrase in dispute could be heard.

Professor Ghil’ad Zuckermann, Chair of Linguistics and Endangered Languages as the University of Adelaide in South Australia, one of the most senior experts in his field, then studied the tape.

The Professor, who is fluent in 13 languages, including Hebrew, and is a consultant to the Oxford English Dictionary, established that the “slur” was actually a Hebrew phrase, “Tikrah lemishu,ze dachuf” meaning: “Call someone, it is urgent.”

Professor Zuckermann suggested that BBC editors may have fallen victim to a phenomenon known as the “Apollonian tendency” — the wish to make order of unfamiliar information by applying ideas that are already in the brain of the person listening. This is a concept explored by Professor Zuckermann in his book Language Contact and Lexical Enrichment in Israeli Hebrew (Palgrave Macmillan 2003).

The professor concluded: “I was unable to detect any anti-Muslim slur in particular, at any point in the footage, either in English or in Hebrew.” (emphasis mine)

The BBC’s claim that Jewish people targeted by an antisemitic attack on Oxford Street were themselves guilty of an “anti-Muslim slur” has been proved beyond any doubt to be inaccurate, after the findings of two independent reports published today. pic.twitter.com/Qb9NwIRLCr

— Board of Deputies of British Jews (@BoardofDeputies) December 30, 2021

Antisemitism seems to have permeated across the once-hallowed British broadcaster. Last week, the BBC was named among 10 of the world’s worst antisemitic institutions, according to the LA-based Simon Wiesenthal Center’s (SWC) annual report on global Antisemitism. The British broadcaster ranked 3rd on the list, just behind Iran’s genocidal Mullah regime and Gaza-based jihadi terror group Hamas.

“BBC falsely reported that anti-Muslim slurs could be heard from within the bus, deftly turning the victim into the victimizer,” the SWC annual Antisemitism report found. “Subsequently, BBC has been accused of breaking the law in its reporting of the incident and is being sued, the claimants stating that the passengers on the bus are being discriminated against in the BBC’s reporting of the incident,” the report added. The report also features a series of ugly antisemitic comments made by the BBC employees.

In June 2019, the German broadcaster blocked me on Twitter for calling it out on Muslim Antisemitism. Deutsche Welle later unblocked me and apologized for action.

However, the German broadcaster still remains a safe haven for antisemites and Jew-haters, the latest scandal in its Arabic department shows. “Deutsche Welle was forced to suspend four of its Arabic service employees and one freelancer pending an investigation led by former German Justice Minister,” the SWC report said.

This is what wokism looks like thank you Boris Johnson, may your brand of woke conservatism die.

I think it may have more to do with London’s muslim mayor than the woke joke Johnson.

Danny loves some Mitch McConnell though. 🤣

Another projection of hateful speech.

Of course they didn’t. But, what if they had?

Imagine being more worried about the words somebody said while they were being attacked than about the actual attack. “Well, yeah, we were beating him up but he used a slur between tje 4th punch and the 2nd kick!”

Wait a minute…. a gang of thugs violently attacked some Jewish teens on a public bus, and the BBC take-away was “those teens may have said some hurty words!”

It has to do with priorities. Truth is not even on the list of priorities while protecting from “verbal violence” is very close to the top of the list.

Actual violence is irrelevant to the list because it only exists when possibly maybe kinda practiced (or mentioned, or thought of) by those evil Conservatives.

EVEN IF…the guys on the train said anything, the ones outside couldn’t have heard them. So this isn’t about freedom to speak, it’s about freedom to think. And in the Perfidious Albion, the act of Jews thinking is being ostracized.

Not a public bus. It was a chartered bus. Not that that makes the slightest difference.

The only way Muslims conduct is anywhere near reasonable is when they are less than 1% of the population. Since their reproduction rate is so so high, a bit over 7 children, and they do not assimilate well, they should not be allowed to settle in western countries.

No, they’re anti-Nazi too.
Pro-communist however..

Even a slur on the alleged prophet Mohamed isn’t racist, if it’s based on his sex with a child, his violence, his taking and selling of slaves or his lies about his supposed god.

I would be happy to see those Jews come here, good for our gene pool, and for economic competitiveness.

No offense, but the Wiesenthal classification of the BBC after Iran and Hamas should have been the lede.

The Wiesental Center’s report is indeed a big story. I was merely focused on the Oxford Street incident and thought it was worth mentioning. I always learn from your valued comments, critiques and suggestions.

Understood. And thanks for taking constructive criticism the right way. Your stuff is quite good.

Any non-Muslim should push back on Muslims and their leftist enablers.

I most certainly push back, they are like locusts. Imagine their gain control of America, look at what is happening in Europe. e

You can have a peaceful, polite society or you can have Islam. But you can’t have both.

Old JewHating trick: blame the Jews for “causing” the attack on said Jews. How old? Romans killed a Jewish prophet, then blamed the Jews, then dispersed the Jews and started an effective Jew hating strategy. The very root of JewHating.

Nah, Jew-hating goes back farther than that. The Greeks were hating Jews long before Christianity came around. In fact early Christian antisemitism can be explained entirely by the fact that their recruiting pool was almost entirely from Greeks.

The thing that bothers me about all this is why it should make any difference if the accusations were true. There are people who despise any and every group of people who exist (sometimes with reason), and in a free country they have the right to voice their opinion. There is license to offend and disparage anyone and everyone, but not to resort to violent assault in response.

Sadly, there is no 1st amendment in the UK. With enough political support, laws can be passed there to throw you in jail for mere insulting words, the traditional rights of Englishmen be damned. Come to think of it, I’m not so sure our own 1st amendment is holding up so well either. If freedom dies here, it will be from a pandemic of ignorance combined with neglect by those who should know better.