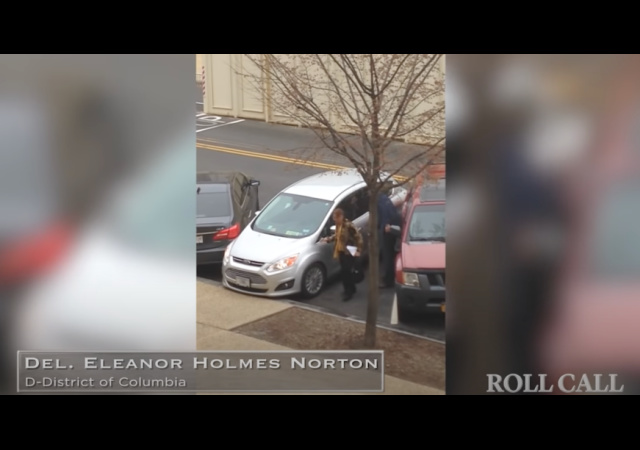 .@SpeakerPelosi is seriously considering this person to serve as the chairwoman of the Transportation Committee. pic.twitter.com/Gh5698ZeYU

Roll Call posted the video on March 25, 2015. It’s not the first time Massie used it against Norton.

We appreciate the offer @EleanorNorton. Just please promise you won’t drive to get the sandwiches.https://t.co/ECwkqkkdlN https://t.co/mmJRuSGzHl

Norton declared her candidacy to lead the committee along with Rep. Rick Larsen (D-WA):

DeFazio is chairman of the panel. Norton and Larsen, along with Rep. Eddie Bernice Johnson of Texas who is also retiring after this Congress, are the next most senior Democrats on the 66-member committee, which has jurisdiction over all modes of transportation as well as infrastructure including clean water and wastewater, pipelines, flood damage and federal real estate.

Where do they find these kinds of people?!?!

This decrepit old relic does not even have vote in the chamber.

What she does have is membership in the Council on Foreign Relations, NWO Central

And it doesn’t get more anti-American than that.

“Where do they find these kinds of people?!?!”

Most in drug dens and insane asylums it would appear. But why do we elect them to high office?

Did you notice the White Soyboys scurrying around to offer her assistance?!

She’s 84. I wonder when she took her last driving test?

Another up and coming Democrat. Maybe she will run in 2024 if Biden can’t answer the call.

Don’t know if she would have the time to run. They may also tap her to chair the subcommittee on urban parking.

If Brandon’s around in 2024 he won’t be running as he has proven himself the walking talking Effup everyone knew he waste Commiecrats will run someone else.

Beneficiaries of AA don’t have to show merit or competency. And besides, tests are racist.

She will probably let the little people take care of the details.

She didn’t park wrong – the other two did.

And someone also originally painted the lines all wrong.

“And to boot the lines were painted white. Further proof that whites are trying to confine POC to all those white racist rules of the road. Oh, Lordee, Lordee, Lordee, we just wants to be free!”

The most surprising thing to me is to discover a DC politician drives a car. They don’t have “little people” to take care of those chores so beneath their station in society? Especially Dems. They’re actually royal!

She is a perfect symbol of the level of competence of everything in her District of Columbia. The two are made for each other.

That is when the owner of the red car cuts his wheels al the way right and floors it to back up. Once free align the rear bumper against the doors to help push her car into the parking spot. He may need to get a little speed up to get it to move. The video showed multiple strikes against his car so there is already damage.

Biden, Norton, Leahey et al. FOSSILS who need to go to the home.

Forget chairing a committee, how the hell did this decrepit relic still have a license after this.

I will not disparage anyone who is more fit, both mentally and physically, than the president of the United States.

On a scale of 1 to 10 she is four or five notches ahead of Biden.

Clearly, Affirmative Action does not apply to driver’s education. Unfortunately, it takes major actions to rid the public of these elected leaches.

Isn’t illegal to leave the scene of an accident. Or is crashing into a parked vehicle not an accident?

My now passed Bro used to ask them to read the odometer while sitting back in normal driving position. If they could not it was reasonable cause to write them for a vision and driving test.

He got a lot of unsafe drivers off the road that way.

Female driver. Someone should take away her car keys.