Says the lady who donned a smile while wearing a Communist hat and hugging Putin’s #1 thug Sergei Lavrov in 2014. 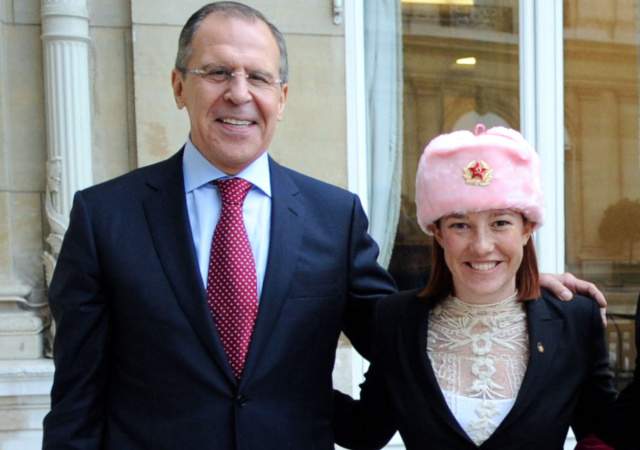 I give Jen Psaki credit. She is great at BSing, but sometimes it’s easier to just use the same old insult: Russia, Russia, Russia!

A reporter asked Psaki about Russia calling the U.S. an unreliable ally because of Biden’s disastrous Afghanistan withdrawal.

PSAKI: “The President ended a 20-year war in Afghanistan, something he had talked about consistently doing for some time, as he was running for president and even before then. I think our commitment to our NATO partners. Our commitment to Ukrainians is clear. We’ve sent more security assistance over the last year than in any year in recent history. We’ve been in constant contact — as is evidenced by the President’s call this afternoon — with our European partners, as we work to ensure we’re in lockstep as we approach the next stage and anticipate what President Putin may or may not do. So what I would say to that is that sounds like the old Russian propaganda playbook, something we’ve talked about in the past, and I’d encourage anyone to be mindful of that.”

Do you think I would forget your behavior during Obama’s term when you were spokeswoman for John Kerry’s State Department? You remember, right? I remember after staying up night after night covering Ukraine for months for Breitbart.

Russia responded w/ #Ushanka Hat gifted to @statedeptspox to stay warm&fancy during #US #winterstorm up to @Sochi2014 pic.twitter.com/yPmWTxydyE

Must say, the Jen Psaki Russian hat brouhaha is amusing. Yes, that was her, all smiles, in 2014 with Russian FM Lavrov and spox Zakharova, plus John Kerry. Yes, she's wearing hammer-and-sickle hat they gave her. Russian contacts! 1/4 https://t.co/UEHfqDurdT pic.twitter.com/Q2nnKIp5vq

A picture taken on January 13, 2014, during the Euromaidan protests in Kyiv. Thousands of Ukrainians protesting against then-President Yanukovych, a Russian-backed dude.

A month later Yanukovych would flee after his minions opened fire on civilians and killed hundreds. Right after that…Russia invaded.

Tell me more about how devoted you guys are to Ukrainians. Don’t forget the hashtag!

To all Democrats, objective truth is “Russian propaganda.”
Like Hunter’s laptop.

Why would anyone thing we are an unreliable ally just because we abandoned millions of Afghans and hundreds of our own to the Taliban because we wanted a good sound bite for the 20th anniversary of the 9/11 attack. I’m mean c’mon man!!! Sound bites are important.

Seems the Europeans think the US is an unreliable ally as they want to talk to the Russians without the US in the room.

As long as that stupid, bitter and nasty old man is president, the USA IS an unreliable ally.

The IS is unreliable, look at what the Obama admin’s did to Gadaffi, no one will ever give up nukes again and you can’t blame them. Look at how we turned our backs on Irans protesters, they just needed a little support, same as Cuba.
We have major swings between Democrat and Republican Presidents. It has to be unnerving. Most foreign governments play till the next more likable global administrations installed.

As long as that dementia-ridden, retarded pedophile occupies the Oval, America’s word isn’t worth crap.

Never let the enemy score points because you’re caught without a solution to the problem. “Pick the target and freeze it, personalize it, polarize it.”

During the Cold War our self-anointed moral and intellectual betters in politics, academia and the media assured us the Russians were the Good Guys.

…and pushed the Glastnost lie. That new era of openness didn’t last long.

remember the stories of TU-95 “Bear” crews holding up Coca-Cola cans and flashing peace signs? They don’t want to become us…they want to invade and us to become them. How naïve is the media?

Pretty in pink…. but an amateur in the real world next to an expert

you think that’s pretty…I see her and say shrill.

She’s better looking than most Dems but that ain’t saying much.

“Pretty in Pink” …as in Rush’s description of Hillary in that classic White House interview.

I’d rather the Ruskies spring for a ushanka in sable for me. I’d rather have my picture taken with Putin than Brandon.

Yup. As a representative of the US government, you don’t put on a Leninist hat unless you respect Leninism.

A catastrophic anthropogenic withdrawal with thousands in collateral “burdens”, and billions of dollars (before inflation) in state of the art military hardware housewarming gifts (“benefits”).

Funny the Russian propaganda started when Teddy Liar of the Senate Kennedy wrote the Kermlin back in the 80s.

Jen looks so natural there. Wonder what she will be when she grows up?

To the Biden Regime the truth is anti-Biden propaganda.

“The President ended a 20-year war in Afghanistan, something he had talked about consistently doing for some time, as he was running for president and even before then.”

She needs to pick her byline…I thought she tried to blame the withdrawal on Trump?

You noticed that, too, did you?

I really thought she was a child standing there

She is a spoiled child everytime she stands before us daily.

Actually, I’d say Putin’s assessment is right on target. With a corrupt pedophile like Biden at the head, America’s promises aren’t worth squirt of warm spit.

I love that picture of Tokyo Roseski. She is absolutely stunning in her Raisa Maximovna Gorbacheva outfits.

Someone please explain this to me.

The filthy treasonous left in this country loved the Soviet Union and wanted America and Americans destroyed under the Soviet boot for as long as I can remember, until the Soviets were no longer ostensibly Communists.

Then suddenly we need war with our Russian brothers because they are the ultimate evil.

Why their hatred of the Russians now? They almost act like orphans whose parents have left them.

You will also notice these spoiled brat children don’t have anything to say about old Chairman Mao 2.0 over there in China, who is the greatest threat to our country.

Me thinks we have a fifth column problem in this nation.

The answer is obvious: because you can no longer bullshit Russians about the glories of Communism. They’ve lived all the bullshit and they’ll call you out on it. It’s mortifying.
“You know too much. Now we have to kill you.”

Putin’s right. Ask not only the non-Taleb Afghans, but also ask the South Vietnamese, Taiwan, the Shah of Iran…