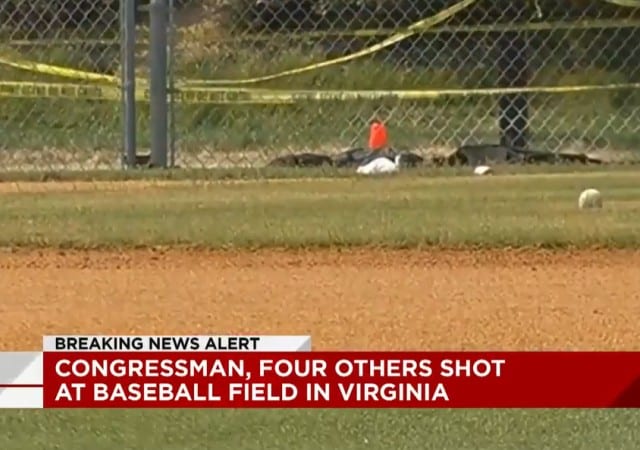 One of the examples conservatives frequently—and rightly—use when discussing bias in media coverage is the Congressional baseball shootings that took place June 14, 2017, in Alexandria, Virginia during a practice game.

Four people were shot, including Rep. Steve Scalise (R-La.), who was nearly killed by deranged Bernie Sanders supporter and Trump hater James T. Hodgkinson, who specifically targeted Republicans (many GOP lawmakers were on the field that day) for assassination. Hodgkinson, 66, later died from injuries he sustained from a shootout with Capitol Police and Alexandria Police officers.

We all remember how the story largely disappeared from view after about the first 48 hours or so, primarily because the shooting could not be linked to “right-wing extremism.” Though there were scattered reports and updates on Scalise’s condition afterward, the story went missing from the front pages of national newspapers and cable news outlets like CNN and MSNBC outside of random attempts to blame Trump and conservatives for what happened.  It took the FBI five years to “quietly admit” the leftist shooting attack on sitting members of Congress was domestic terrorism.

On the one-year anniversary of the Capitol riot this past Thursday, Florida Gov. Ron DeSantis correctly pointed out that the day was like “Christmas” to the media and Democrats, saying that they would use the day to “smear” any supporter of former President Trump. He also decried comparisons of the Capitol riot to the 9/11 terrorist attacks, and noted the disparities between the coverage of the Congressional baseball shootings and the Capitol riot.

“That was like a one-day, two-day story,” said DeSantis, who at the time was a member of Congress and had left the game shortly before the shootings started. “That was not something that the Capitol-based press wanted to talk about. Why? Because it totally undercut their preferred narratives. January 6th allows them to create narratives that are negative about people that supported Donald Trump.”

“The DC, New York media— this is their Christmas, January 6th,” says ⁦@GovRonDeSantis⁩, commenting on last year’s attempted insurrection at the US Capitol. Says anniversary will be used to “smear anyone who ever supported Donald Trump.” pic.twitter.com/3xMXZJGoif

New York Times reporter Maggie Haberman, who is also a political analyst for CNN, was triggered by DeSantis’s comments and took to the Twitter machine to dispute his claims, declaring that the Congressional baseball shootings “were a huge story”:

He’s arguing the shootings didn’t get much coverage? Pretty sure they were a huge story. https://t.co/g5uXIdzehh

You're welcome to talk yourself into idea that a similar murder attempt on an entire team of Democrats would have gotten the same treatment. I think the shooting of Gabby Giffords is pretty analogous and disproves that theory. Even without that data point, it's just not true.

I checked at the time, and it is real. News vans were staked out at the home of the parents of Elizabeth Lauten, the GOP staffer who criticized Obama's daughters on Facebook that time, for longer than they were at the practice baseball field. That's not just a news cycle issue.

Your newspaper, for instance, covered it as a story that might make Bernie Sanders look bad. https://t.co/5XVQTdPkZW https://t.co/xmExs7vmsW

Haberman never responded directly to any of her critics, of course, because apparently, that’s beneath her. Instead, she latched on to fellow CNNer Andrew Kaczynski’s (failed) attempt at undercutting what Ham said of coverage at the time, and claimed Ham was trying to “pick a fight”:

I wasn't looking for a fight here, and not sure why she picked it, but this is odd. https://t.co/gMtfm4fQMu

Later, Haberman appeared to agree with an NBC News photographer’s comment about the media’s coverage of the Congressional baseball shootings, while also insinuating that from a “proportionate” perspective the Capitol riot got more coverage because it was in her view a bigger deal than a baseball field full of Republican members of Congress being shot at:

Almost like news coverage doesn't actually work the way it's being described, and like the Capitol riot was not proportionate to any number of stories.

Whenever I see Haberman commenting on something I always think about the Intercept report from a few years ago which noted how Hillary Clinton’s failed 2016 presidential campaign viewed Haberman as an ally:

Hillary Clinton's long-time top advisor and press aide heaps praise on Maggie Haberman. Irony of all this controversy is a secret 2016 Clinton campaign memo identified Haberman as a "friendly journalist" who could "be counted on" to "tee up stories for us" https://t.co/TdkmLHXmIc https://t.co/wBQJCNjxKk

From that strategy memo:

We have has a very good relationship with Maggie Haberman of Politico over the last year. We have had her tee up stories for us before and have never been disappointed. While we should have a larger conversation in the near future about a broader strategy for reengaging the beat press that covers HRC, for this we think we can achieve our objective and do the most shaping by going to Maggie.

The good news is that most people can and are beginning to clearly see the difference in the coverage; placement in print, space and length, follow up reporting. Not just here but with many issues especially the ones selected by corporate media and elites as supporting their preferred narratives.

Long ago I was in a class that had a visitor who grew up in Nazi Germany. He said something to the effect that even the most die-hard dedicated Nazis could tell what was going on when they read in the paper that today’s glorious Wehrmacht victory was twenty miles closer to Berlin than yesterday’s glorious victory.

Forgive the Nazi reference but I thought the point about the declining effectiveness of propaganda was relevant.

“The treaty was signed to end a long war between the Hittite Empire and the Egyptians, who had fought for over two centuries to gain mastery over the lands of the eastern Mediterranean. The conflict culminated with an attempted Egyptian invasion in 1274 BC that was stopped by the Hittites at the city of Kadesh on the Orontes River in what is now Syria. The Battle of Kadesh resulted in both sides suffering heavy casualties, but neither was able to prevail decisively in either the battle or the war. The conflict continued inconclusively for about fifteen more years before the treaty was signed. Although it is often referred to as the “Treaty of Kadesh”, it was actually signed long after the battle, and Kadesh is not mentioned in the text.

…Although the Egyptians were able to survive a terrible predicament in Kadesh, it was not the splendid victory that Ramesses sought to portray but a stalemate in which both sides had sustained heavily losses.[16] After an unsuccessful attempt to gain further ground the following day, Ramesses headed back south to Egypt bragging about his individual achievements during Kadesh. Even though Ramesses technically won the battle, he ultimately lost the war since Muwatalli and his army retook Amurru and extended the buffer zone with Egypt further southward.[17]…”

Or you can refer to the great “victory” the Imperial Japanese Navy won at Midway. And they kept winning closer to home, even as the American bombers arrived over Tokyo. Like the armies of the Pharoahs, the forces of his Imperial Majesty, the “Son of Heaven” and direct descendant of the sun goddess Amaterasu, never lost.

But keep the Nazi comparison; I believe it’s apt.

I remember I redpilled somebody about 15 years ago by simply pointing out the difference in pictures chosen in any story. About 15 years ago ANY story involving Bitch McConnell was accompanied by THE SAME picture of a weird angle close-up where he was clearly sweating and looked flustered. They used the same picture for YEARS, while Obama always got a series

I redpilled him by asking the very simple question – why did they constantly use the same bad picture of McConnell, and yet they have dozens of different pictures of Obama where he ALWAYS looked somber, thoughtful, and in control.

He literally couldn’t answer because the only answer was they wanted to make even the RINO trash look bad.

They did the same thing with Trump. There was only a handful of ‘bad’ Trump pictures that were CONSTANTLY re-used by all of the media outlets.

They actually changed the tint on the broadcast to make him look orange.

CNN just did the same thing to Joe Rogan. They doctored the tint of a picture he posted on his Instagram account to make him look sicker than he ever was.

Fires wipe out towns in Colorado, tornadoes in Kentucky.

The MSM yawns. Maybe they’ll send someone who agrees to go “provided I get back to DC or NYC within 36 hours.”

But a snowflake lands on Brian Williams’ Guccis, “Stop the presses.”

Not too self-absorbed, huh?

It aint’ about ‘absorption’ – it’s about corruption: they’re paid to be willfully blind fools, and paid rather well.

I apologize, but this will become repetitive….

If your position / argument is strong, you do not need to lie….

But if lies are the only tool in your toolbox, what else do you do?

I remember the intense investigation of the Republican train derailment.

Must have taken 15 minutes.

For HOW MANY YEARS did we hear about the insane idiot that shot Giffords? And they used it to scream and bitch and whine about how many utterly unrelated politicians – Sarah Palin and the idiotic ‘target map’ being the most ludicrous by far.

A committed Bernie Bro tried to kill an entire group of Republicans EXPLICITLY because they were Republicans, and it gets memory holed within 3 days.

Remember that when pieces of shit like Cruz try and whine about ‘terrorism’ on Jan 6th.

I find better ideas and analysis inside the comment sections of the stuff I read here and other sites. I consider the media to be at an 8th grade level or lower. they are too repetitive like elementary education rather than thought provoking.

Very observant of you. I knew a speechwriter once ( did write for a president) that said all speeches were written on that level because that’s was the level most America could understand what was being said.

I found 103 acts of violence committed by the left ( resistance) under the Trump administration.

A minor complaint with this very good article.

Why do we on the right accept the description of the attacker as the “deranged Bernie Sanders supporter and Trump hater”.

He was not “deranged”.

That is another leftist language grab to soften the plain fact that he was, and no doubt still is, a murderer, a killer for a cause,

The opinions of media “reporters” have a suspicious connection to their livelihood.