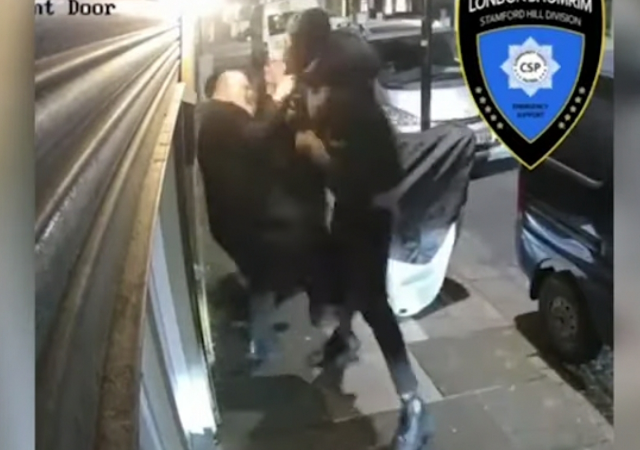 The victims, who wore Orthodox Jewish attire, were closing their shop after a day’s work in Stamford Hill, a predominantly Jewish neighborhood in inner London. “The shocking video shows the pair locking up their shop in north London, when they are approached by a passer-by who launches an astonishing attack, knocking one to the floor and causing both to lose their kippah,” the UK’s Daily Mail noted.

The elderly victims were hospitalized after the assault. “Shomrim, a local volunteer police force, said one victim sustained a broken nose and fractured wrist in the attack. The other man suffered bruising and injuries to his eye and wrist,” UK newspaper the Evening Standard reported Friday.

Most media reports have been silent on the attacker’s identity and motives. The suspect taken into police custody has been identified as Malaki Thorpe, an 18-year-old London resident. He had illegal weapons, the police report said.

British weekly The Jewish Chronicle reported the details of the unprovoked antisemitic attack:

Police have arrested a man after he was filmed violently assaulting two Orthodox Jewish men in Stamford Hill.

According to footage released by Shomrim, the two men were exiting a building when a figure dressed in black walks past. The attacker then says something to two men who turn to face him. The attacker then begins striking the men repeatedly, with enough force to knock off one of the men’s kippot.

The man then follows them continually punching the men until they fall over. According to Shomrim, the men were taken to hospital by Hatzola and released later the same evening.

Malaki Thorpe, 18, of Fairview Road N15, is due to appear in custody today at Highbury Corner Magistrates’ Court charged with two counts of racially aggravated assault causing actual bodily harm and one count of possession of an offensive weapon.

Wednesday’s attack is not an isolated incident. In recent months alone, the Jewish neighborhood of Stamford Hill has witnessed a series of antisemitic attacks and incidents. UK weekly The Jewish Chronicle reported on January 5 that a veiled Somali woman was “arrested after throwing stones into the playground of a Jewish school” in Stamford Hill. On August 18, a 64-year-old man was beaten unconscious on his way to a Stamford Hill synagogue. As BBC noted, the “same day, a 30-year-old man was struck on the head with a bottle, and a 14-year-old boy was attacked” — both violent antisemitic attacks.

The surge in violence against Jews is not limited to the Stamford Hill neighborhood. “The first six months of 2021 were the worst on record for anti-Semitic crimes in the UK – with 1,308 incidents, according to the Community Security Trust,” the British TV network ITV reported last week. “This is an increase of 49% from the 875 anti-Semitic incidents recorded in the first half of 2020.”

The British media, just like mainstream media in other Western countries, is complicit in the surging wave of antisemitic crimes as they cover up the motives whenever immigrant perpetrators are involved.

Last week, UK state media regulator Ofcom opened an investigation into the BBC after evidence emerged that the broadcaster may have falsely accused the Jewish victims of ‘islamophobia’ in an antisemitic attack that took place two months ago. An independent probe showed that the British national broadcaster falsely reported that Jewish teens uttered “anti-Muslim slurs” when attacked by a group of men in central London.

“Most media reports have been silent on the attacker’s identity and motives.”

I once saw a rock and was wondering why it was coming closer,

But then it hit me.

Because he was a black Muslim?

This is just the tip of the iceberg of Jewish hate that lies deep under the surface wherever you go. There will not be much mention made of this huge iceberg unless it’s hit by a titanic.

This is the UK the attackers often are Asian (which in the UK means people from the Indian subcontinent, not from East Asia). Not in this case, though.

Yes that is correct.Asian in UK means person of South Asian origin i.e Pakistani,Bangladeshi,Nepali,Sri Lankan or Indian.
However anti-Semitism is mostly prevalent among Pakistanis and Bangladeshis.
Its also noteworthy that there has also been considerable influx of Muslim refugees from Middle East and Afghanistan.This has dramatically increased number of
Muslims in UK especially London.It wouldnt be far fetched to say that as much as 25% of
Londoners are practicing Muslims.

His defence will be:
1. they called him a “racial” name or
2. he has mental problems

Is he “homeless” too?

Also oppressed, and having bad memories brought on by the legacy of slavery.

Someone clicked their car’s power door locks while he was crossing the street.

Increase in anti-symetic attacks is equal to the increase in number of Jewish organizations defending Islam.

Jewish liberals are a greater existential threat to world Jewry than any outside threat.

Learn when to make this comment and when not to. On this article is a “not to.”

I don’t agree with you. The Jewish man in this story is being beaten DIRECTLY because of the efforts of Jewish liberals.

No, they are not. In the last election something like 90% of Jews voted Tory.

Actually that’s only a recent thing, historically the majority of Jews voted in a progressive manner in the UK, the big swing was associated with Jeremy Corbyn’s leadership of labour which had an anti semitism issue which was viewed widely as being a big problem.

Not in the UK.

You do realize this is a story from the UK right?

40 mins for the police to respond? in a major city in the western world? a hell of a lot can happen in 40 SECONDS–come on

I have never bought turning to the other cheek.

Once again, the legacy media ignores the ideological component of anti Semitism

Was diversity a motive? Was Jew privilege a motive? One step forward, two steps backward.

Malaki — Sounds like a strong Anglo-Saxon name going back to William the Conqueror conquering England at the Battle of Hastings in 1066.

Even London has a “dazzling urbanite” problem.

attacked by a group of men in central London

Men of no specific description?

I would implore the author to read the article before making sweeping claims on it. The attack was noted as being a racially motivated attack, with a link to the same story in greater detail calling it anti-semitic. It seems like a total misreading of the story, given the limited details of the facts of the case the news story is brief so leaving out unsubstantiated details is good reporting. Its not an opinion piece; I know that’s hard to understand given the propensity of American media to mix journalism and opinion to the point where its no longer clear there is any journalism – yes I’m looking at you Fox news.

Wonder who paid the lad? JDL or 1 of the 300 J groups that profit from scenes like this.